Addressing global stakeholders now engaged in COP27, researchers from CGIAR and CDKN come together to call for radical collaborations to achieve climate justice for women, girls and marginalized communities. This article first appeared on gender.cgiar.org

Calling for climate justice at COP27

As the UNFCCC COP27 gets under way in Sharm El-Sheikh, Egypt, climate-affected communities wait to hear how nation states and international financial institutions will make good on their promise to double climate change adaptation financing by 2025.

In addition, women’s advocates, youth groups, representatives of local and Indigenous communities will be asking, how can we also make sure that climate action will be gender just? How can we ensure that women, youth and marginalized communities, who are disproportionately impacted by climate change, are at the heart of COP27 discussions and interventions?

The need for gender-just climate solutions is not only a women’s issue. In fact, the link between gender inequality and food insecurity is stark, yet poorly understood and addressed: in 2021, 150 million more women than men were found to be food insecure. Claudia Sadoff, Executive Managing Director of CGIAR, has called this an unconscionable jump from 2018, when this imbalance was an already unacceptable 18 million. The same research shows that the greater the gender equality gap, the hungrier everyone is.

Therefore, true success at COP27 will mean achieving climate justice, not least for women and girls. We believe that one route to solutions is through partnerships, between governments and development partners and community-based women’s groups and networks, that give equal voice to women from low-income, climate-affected communities to define climate and water problems and solutions. Such collaborations would, despite their obvious merit, be ‘radical’ because women in climate-affected communities today often are regarded as mere ‘beneficiaries’. However, our experience shows that given the space and resources to do so, women can lead innovation on climate solutions.

The CGIAR GENDER Impact Platform this year published a path-breaking analysis and mapping of climate-agriculture-gender inequality hotspots. These hotspots are defined as “areas where large numbers of women are participating in agriculture and food production and where extreme climate hazards trigger crop failure, pest and disease outbreaks, and degradation of land and water resources.” The inequality hotspots are also areas “where formal and informal institutions, including cultural and social norms, create inequalities that exacerbate women’s vulnerabilities to climate change.”
The hotspot mapping was designed for a very practical use: to effectively steer climate investments and partnerships to tackle gender inequalities in access to agricultural inputs, land and capital as well as women’s limited access to critical weather and climate information.

In these hotspots, the climate crisis often manifests itself as a water crisis, especially for women. Extreme weather events such as droughts and floods have deeply impacted food systems, with a disproportionate impact on women.

Increasing male out-migration, driven by climate change impacts, requires left-behind rural women to manage both domestic and productive responsibilities, including agriculture and irrigation, despite their limited access to institutions, services, inputs, credit and new technologies for climate mitigation and adaptation. Women walk longer to access water for domestic and productive use and experience not just physical, but, according to the Water Insecurity Experiences (WISE) framework, also emotional stress, including shame, anxiety, worry and lack of sleep.

To support women to respond to such climate change impacts, and to reduce the gender gap in food security, there is an urgent need to go beyond just targeting women in climate change adaptation and mitigation efforts, but to consider women leaders in innovation.

We know that key agriculture, water and environment institutions in some of the most climate-vulnerable regions lack financial resources, sectoral coordination, knowledge about the diversity of climate vulnerability and local communities’ adaptive capacities as well as the capacity to respond in gender-inclusive ways. Therefore, CGIAR researchers and partners, through new CGIAR research initiatives in Asia and Africa, will build on the existing climate-agriculture-gender inequality hotspots, integrating water-gender lens, to provide evidence on how key institutions can respond to complex climate challenges in gender-inclusive ways. 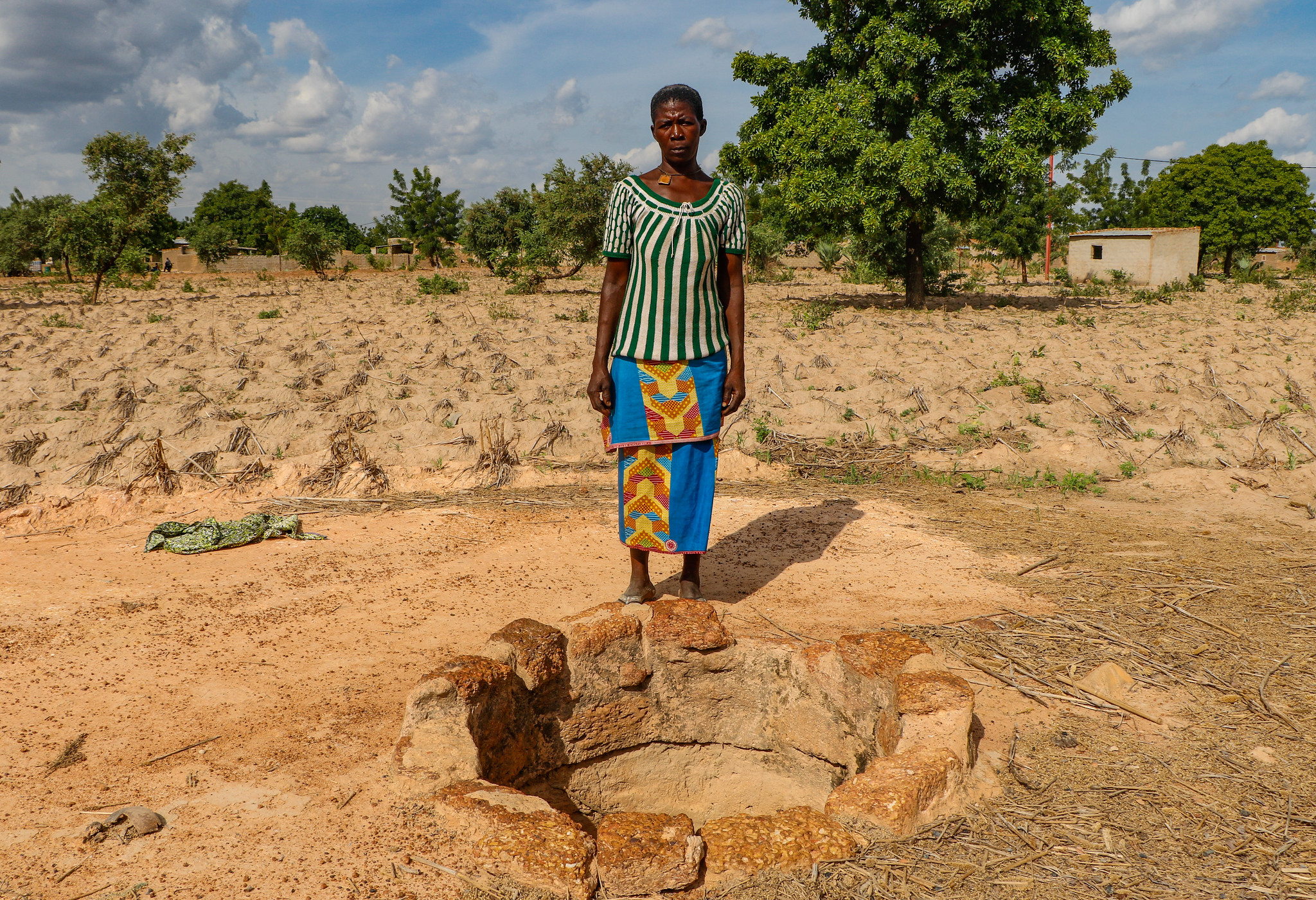 A woman in Burkina Faso standing next to the well she dug herself which has dried up (Photo: Manon Koningstein/IWMI)

For too long, women have been portrayed as ‘victims’ in global climate change narratives. This tends to yield climate solutions that do not really work for them. When we consider some recent climate-agriculture innovations, we see that women themselves are already innovating locally appropriate climate solutions across low- and middle-income countries – including in some of the inequality hotspot areas.

In Malawi, which has been identified as a hotspot, women farmers are expanding their productivity, climate resilience and economic security through engaging in macadamia nut and fruit tree value chains, as part of the GLOW research program for which CDKN provides the knowledge Hub. These crops promise to secure women’s income, while sequestering carbon from the atmosphere and providing ecological benefits such as erosion control, which lock in their farmland’s fertility.

Other work from CDKN and its partners, in Ghana’s Volta River Delta, show that women farmers facing increasing water shortages, coupled with lack of finance and land tenure, have made multiple innovations to use water more efficiently, diversify their crops and add value.

What’s particularly exciting is that young women and men are taking center stage in these efforts to tackle climate change and develop locally appropriate solutions. They are showing that agriculture can be viable, profitable and desirable in a warming world, even when water supply is unpredictable or scarce.

An open door for radical collaborations

Still, transforming food systems while contending with the gender divide in access to resources and resilience requires partnerships that create two-way streets. While climate science and innovations need to be accessible to women, youth and marginalized groups in climate-agriculture-gender-inequality hotspots, these actors are not passive recipients. They are leaders of climate innovation. We need to value and validate Indigenous and local knowledge and lived experiences in science narratives and interventions.

We believe that all governments and international financial institutions need to engage in radical collaborations with women’s groups and local community networks to accelerate gender-just climate solutions in agriculture and food systems. In this vein, the Climate and Development Knowledge Network’s strategy for the next five years calls for more knowledge exchange and co-creation of locally appropriate climate solutions, just as these ambitions are reflected in several of CGIAR’s new research initiatives.

We need to make sure that climate innovations work for women, youth and marginalized groups, and this implies engaging these actors in their rightful roles as innovation leaders. Our work in facilitating and achieving these collaborations will continue long after the conference doors have closed on COP27 and delegates have made their way home.