After Paris - “Going from intended to implemented, that is the question” says Margaret Kamau, Kenya

After Paris - “Going from intended to implemented, that is the question” says Margaret Kamau, Kenya

Kenya aims to reduce its greenhouse gas emissions by 30% by 2030 relative to Business As Usual. This goal is subject to international support in the form of finance, investment, technology development and transfer, and capacity building. Margaret Kamau, CDKN´s Country Engagement and Project Manager talks to Miren Gutiérrez about what this target means for her country. This is part of a CDKN series on implementing the Paris Agreement: read more at www.cdkn.org/after-paris-perspectives

The Paris Agreement created an ambitious mandate for the global community. Does it change the national conversation in Kenya about action on climate change? If so, how?

Well before, for much of 2015, there has been quite a momentum in Kenya around preparations for COP21 [Editor: 21st Conference of the Parties for the UNFCCC], the INDCs [Climate plans which countries submitted to the conference] and the Paris Agreement. A number of stakeholders were quite involved in the ‘road to COP’ process. I think that this kind of momentum has carried on in 2016.

From meetings that we had this February and March, we can tell there is a bit of uncertainty about “what next” with regards to the Paris Agreement. But the Government of Kenya is taking steps to clarify this. For example, in mid-February there was a meeting on the post-Paris situation with a wide range of civil society organisations and other stakeholders, where the government was able to explain what the next steps were and what the COP21 meant.

In two weeks, there is another stakeholder consultation session, now addressed towards developing the next steps after Paris. Now we are waiting to hear what the government has planned and what they need support for. I know they are also looking at the implications for Kenya's growth and sustainable development. So I think the main influence COP21 has had is creating momentum before, during and after the event. 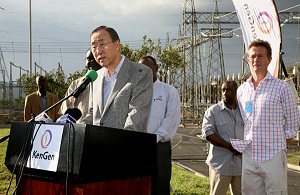 Are these consultations with civil society and stakeholders binding in any way, has the government been gathering their feedback, or are they just informative?

They have been mainly for information purposes, not to get feedback or to pass clear information on what the next steps are. But I believe the intention of the government is that the next meeting is to be more action oriented. Kenya’s civil society has challenged the government to take action to implementing the agreement. But not openly in the media.

As for coverage, media articles and news stories on climate change tended to be published before and during COP21, with different sectoral approaches. Since the Paris conference, we haven’t seen as much. Although that is not necessarily negative…

Kenya indeed submitted an ‘Intended Nationally Determined Contribution’ (INDC). What will it take to get from ‘intended’ to ‘implemented’? What are the big opportunities and challenges?

That is the question. In terms of implementation, we believe the next step the government should take is to lay out the key priority actions in the climate action plan, and take them forward. There is the realisation that the actions contained in the INDC have been ongoing actions. So it is about accelerating investment to support implementation in those areas.

The big opportunities are first at a sectoral level. The energy sector, the forestry sector, the transport sector have all seen significant growth in the last few years. So those would be quick wins: sectors where there has been ongoing work.

In the energy sector, for example, there is already significant investment [in low carbon energy], but there is room for more. The next steps would be: identifying the actions, the key people and institutions to take those actions and accessing the finance required.

Another opportunity would be leveraging the momentum that the Paris Agreement has created to make sure that all stakeholders are aware of it, and employing this ongoing interest and buy-in for activities.

Finance presents both an opportunity and a challenge. We have different financing opportunities, such as Nationally Appropriate Mitigation Actions (NAMAs) and the Green Climate Fund (GCF), which may be accessed to implement the country’s NDC. A Kenyan entity has just been accredited as the National Management Authority to access direct funding from the GCF. These are opportunities that the government is already taking.

NAMAs are being developed for the bus rapid transit system, another one for a grid of renewable energy and waste management. A geothermal NAMA was developed and is explored in CDKN’s Inside Story on Climate Compatible Development.

In addition, there is bilateral and multilateral funding: the governments of the UK and Japan and institutions such as the World Bank are funding elements of the NDC as well.

In the finance arena, the Government of Kenya has faced hurdles in producing investment plans and proposals that actually attract funding. Here, some investment may be needed in enhancing capacity for proposal development. A current CDKN project is supporting the government to write an adaptation proposal for the GCF. We are responding to a direct government request to help them fill a gap.

Other challenges include coordination. Over the past years, I think the government has improved its coordinated approach towards climate change and development. This has been particularly evident recently during the INDC process. But coordination across government remains a challenge which they continue to address. 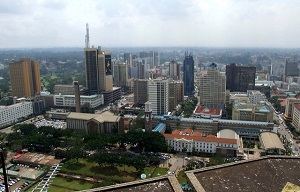 The Paris Agreement calls for limiting average global temperature rise well below 2C, as close to 1.5C as possible. Kenya's emissions are not huge, but they are growing fast – what hope to see economic growth and human development with lowered emissions in the specific case of Kenya?

Using the energy sector is a good example. We have seen a significant increase in investments in the renewable energy sector, particularly in geothermal and wind power. About 50% of Kenya´s electricity[1] comes from renewable sources, and this is a number that is increasing on a daily basis. We think that this it is not actually hampering economic growth, because before geothermal power became the focus, hydroelectric power was being produced from dams. Obviously, that meant that during the power crisis electricity was quite erratic because of the reliance on hydropower [Editor: linked to reduced rainfall and river levels – the CDKN Inside Story explains further]. So the focus on this new generation of renewables is actually supporting growth because it is a more reliable source of power and businesses now have more reliable sources of power.

In agriculture, initiatives such as the one led by COMESA (Common Market for Eastern and Southern Africa) to reduce agricultural emissions across Kenya and several other African countries will help combat climate change while addressing food security, from the policy level to the farm level.

This will continue being a trend for the next couple of years. We still have untapped solar and wind resources. We are expected to have a large 300 megawatt solar farm in the next few years, which will only reduce our reliance on fossil fuels and promote economic growth. 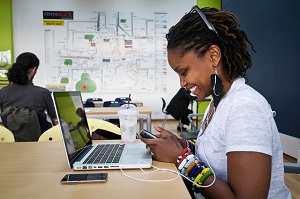 If you check most INDCs from developing countries their emission reduction targets are subject to technology development, international climate finance and capacity building. What would happen if these ‘means of implementation’ do not flow?

Countries like Kenya have taken some steps towards building internal capacity and using domestic financial national resources to put in place climate change initiatives. This is evident in some government-enabled food security projects, as well as in the setting up of research institutions, industrial research institutions, with technology development. If the means are not put forward, it is not to say that countries such as Kenya will not take action anyway. But the view is that action will be slower because obviously there are other pressing needs that the domestic budget needs to serve. It won't be a large allocation for a long time, so this will slow the process in achieving sustainable development.

Why are some countries more successful than others in attracting international resources to support climate compatible development? Does their ability to negotiate have anything to do with it? How would you rate Kenya´s performance so far?

Definitely the ability of a country to negotiate in the international arena plays a huge role in attracting climate finance. But also, one thing that stands out looking at these countries have taken initiatives on their own. Brazil, Mexico and Morocco may have allocated domestic resources towards climate change initiatives. And this can help make a case before they go and negotiate climate finance. I believe part of making the case is showing what you can do with our own resources. I think that these have been countries that have been successful in doing this, and when they go to international arena they are not just asking for money. They are saying: this is what we have done and now we need more money to grow this pilot initiate.

Finally, Kenya not very well known for its negotiation power, but I think being part of the African Group of Negotiators has helped Kenya and fellow African countries to try to negotiate collectively. But [its influence] could be improved with further international support.

The SDGs have many climate-related components, as well as a dedicated climate goal. What are some of the ways that the SDGs will influence the planning and practice of development in Kenya in the coming years?

There has not been a lot of communication on the SDGs locally, since the New York summit last September. CDKN helped convene an SDG dialogue process in 2014 – to provide a platform for Kenyan voices in developing the goals. And what came out of this process is that Kenya would need more integrated planning, not just for key economic sectors, making integrated planning a habit if the SDGs are to be achieved. Kenya is also in the process of writing up a green economy strategy, which looks at how to maintain sustainable development while growing the economy.

[1] Kenya is looking to geothermal energy to power its growth and reduce reliance on imports. As of 2015, geothermal accounted for 51% percent of Kenya’s energy mix (up from only 13% in 2010). Kenya´s also investing on wind, with Africa’s largest wind farm (310 MW) set to provide another 20% of the country´s installed electricity generating capacity. Those two combined will help Kenya generate 71% of its electricity with renewables in the future, according to CleanTechnica.