In the lead up to the COP27 Resilience Hub, the Resilience Knowledge Coalition launched a social media contest to highlight youth action from the local, national and global level. Young people from 43 countries shared videos, photos and paintings showcasing their resilience solutions. The #Art4Resilience Social Media contest winners have now been announced.

The Resilience Knowledge Coalition, a network consisting of the Global Resilience Partnership (GRP), CDKN and the International Centre for Climate Change and Development (ICCCAD) is excited to announce the #Art4Resilience Social Media contest winners.

From Costa Rica to Kenya, India to Benin, Mozambique to Brunei; whether through science, technology, activism, art, formal or traditional education, eco-friendly lifestyle, or entrepreneurship young people are increasingly creating solutions to deal with the increasing impacts of climate change.

In the lead up to the COP27 Resilience Hub, the Resilience Knowledge Coalition launched a social media contest to highlight youth action from the local, national and global level. This was an opportunity for young people from all over the world to use their voice and share their innovations and solutions for building their communities’ resilience to shocks and stresses like climate change. Young people from 43 countries shared videos, photos and paintings showcasing their resilience solutions.

Cyclone buffers – The women of Sundarbans

Sudip Maiti, a grassroot climate journalist from India shares the story of Sundarbans women: “These women have experienced repeated cyclones, and each time they fight harder to reclaim their land and live in harmony with nature”

They started an initiative to maintain a mangrove nursery, in the Sundarbans in the Bay of Bengal, which is highly vulnerable to rising sea level. Run by women, these nurseries provide mangrove saplings to countless plantation drives in the erosion-prone areas throughout the year; creating a bio-shield, and protecting the UNESCO world heritage site from ever-increasing climate disasters. Biodiversity-rich, rehabilitated riverine landscapes of mangroves act as a vital carbon sink, battling climate change at a local level with a global context. These female-led climate change-resilient micro farms generate a source of income for marginalised communities, empowering grassroots women, and transforming the local economy for a safer, brighter future.

Enhancing resilience in the Maasai Community

Anita Soina is a 22 year old climate advocate from the Maasai Community in Kenya. Her community has faced droughts for the past 4 years. She is working to find ways to enhance the resilience of her community to drought. She believes that by telling her community’s story, showing their vulnerabilities to the impacts of climate change like droughts, that decision makers will see the urgency and act to find solutions.

She also aims to be an elected official to positively influence the policies that affect the youth and climate change in Kenya.

In the Land of the Batammariba in north Benin, climate change has affected the traditional way of life. Traditional houses, Takienta, no longer exist. Flooding, deforestation, and land use change are some of the reasons why these houses have disappeared from the region. Ibrahim Tchan together with his peers founded the first ecological museum and mobile school of ancestral skills. The museum aims to share and preserve traditional knowledge for future generations. 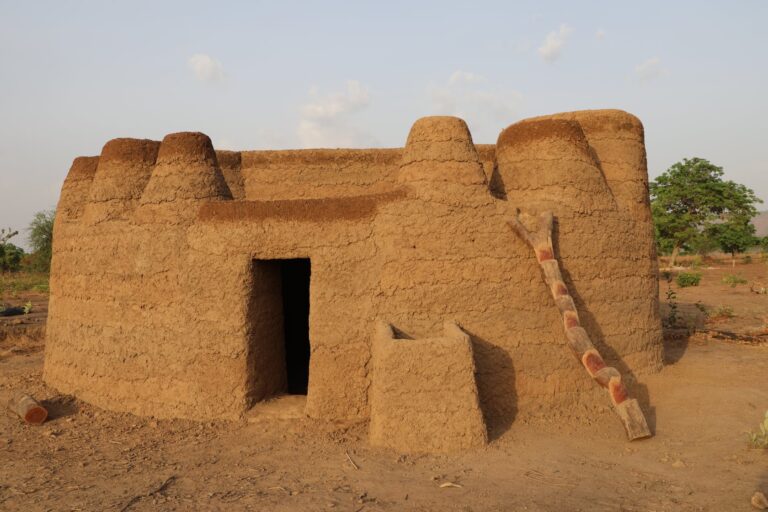 Restoring the riverbanks of the Mathare and Nairobi River

Tempo Arts Centre is made up of a group of young people in Kenya from 12- 35 years who work together to restore the area surrounding the Mathare and Nairobi River. They clean the rivers every Tuesday and Friday to get rid of plastic waste, and they plant bamboo trees that act as water purifiers and prevent further encroachment of the riparian land and river erosion. Additionally, they have created a garden where they plant vegetables, cassava, maize, yams and fruit trees like bananas and avocados. They sell these vegetables to provide funds for maintaining the centre. Apart from that, they have beautified the centre by planting flowers and other species of trees that provide shade and a cool breeze as they entertain themselves through acrobatics.

“Participating and winning in this contest has been a great milestone for our group. We hope this will inspire other young people around the Nairobi informal settlements to believe that they can create green spaces for themselves,” says Jared Onyango.

The story of Boruca Women

The enterprising women from the indigenous community of Boruca, plant trees in the community nursery to restore the forests of their territory. They strengthen and rehabilitate existing ecosystems, support biodiversity and food security, promote livelihoods and economic projects, and contribute to climate mitigation and adaptation.

Jimena, a 25 year old from Costa Rica is part of the organisation who submitted the entry for the contest. She was inspired by the indigenous women of Boruca who use their knowledge and culture to restore degraded forests in their community.

The Boruca Women are not only planting trees, they also have their own sustainable business, which includes tourism and agriculture.

Many young people, particularly in the Global South, have already lived their entire lives in a state of climate emergency, and will continue to bear the brunt of the impacts of climate change if action is not taken. This contest along with other sources of evidence shows that young people are not just waiting for action from the outside, but they have found the inspiration and courage to lead the action from the ground. When grassroots youth are supported, they will keep unleashing their potential and shape change.