The potential of local climate innovation in Latin America

The potential of local climate innovation in Latin America

An action research programme in Latin America has proven the potential of community-led innovation to build resilience to climate change - and shows how much could be achieved at scale, with the right external support. CDKN's Latin America team reports.

Climate change is ‘everyone’s business’ in Latin America’s cities. Its impacts already reach deep into people’s lives and everyone has a role to play in raising awareness and crafting solutions.  Approaches to climate resilience are emerging in small- and medium-sized cities and in river basins, which could be adopted more widely across the region. These were the conclusions of the final ‘reflection event’ of the Climate Resilient Cities (CRC) in Latin America initiative yesterday in Quito, Ecuador.

The CRC initiative explored the relationship between climate change, development and wellbeing in  13 small and medium-sized cities of the region: across Argentina, Brazil, Colombia El Salvador, Mexico, Paraguay and Peru.It demonstrated that local governments in these cities can work with many actors from diverse local and scientific groups, to gather, validate, and apply knowledge about climate change risks to decision-making, and so strengthen resilience.

Gathering in Quito, resilience experts discussed the many factors that are making Latin American cities more vulnerable to climate change:

Most of the cities engaged in the CRC initiative are situated in flood plains or in delta regions where they are highly susceptible to flooding at times of extreme rainfall – such as the ‘triangle cities’ area of Ciudad del Este, Paraguay; Foz de Iguazo, Brazil; and Puerto Iguazu, Argentina, or the four cities of the Amazonian delta region. Others suffer water scarcity – brought on by a combination of drought and water mismanagement, such as the Cumbaza basin in Peru—and this is due to get worse under future climate change.

“We have reconceptualised the cities’ risk exposure as the interaction between climate variables and urban planning practices,” said Dr Ana Carolina Lima of Federal University of Para, Brazil. “For example, in the Amazon delta region, municipal authorities are currently using weak materials to build embankments to hold back floods . As a result, cities are plagued by dangerous sinkholes and water intrusion.”

At the individual level, a person’s social and economic standing plays a large role in their climate vulnerability. Foremost among these dimensions is gender.  Being female was a consistent factor in making people more vulnerable to the impacts of climate change across the study sites.

Partly, this is related to women’s lower average incomes: in Latin America, one in four people lives in poverty, according to gender expert Alexandra Vasquez; but 31% of women live in poverty compared to 11% of men.

Women’s traditional social roles also make them more vulnerable to extreme climate and weather events. They are expected to be the primary care-givers, with principal responsibility for the health and nutrition of children and families. Although women shoulder the most responsibilities for household recovery after climate disasters, said Vasquez, they lack an equal voice in decision-making at community or regional level.

Compounded with gender inequality, other characteristics such as a woman’s ethnicity – e.g., being of African or indigenous descent – or her young age, can provoke further discrimination, stereotyping, and lack of influence.

“Bringing the gender perspective allows us to unpack many social vulnerabilities,” said Hector Becerril of the University of Guerrero. “Without diversity you lose the creativity and intelligence of the different groups…which would allow us to generate more relevant climate adaptation strategies.’” 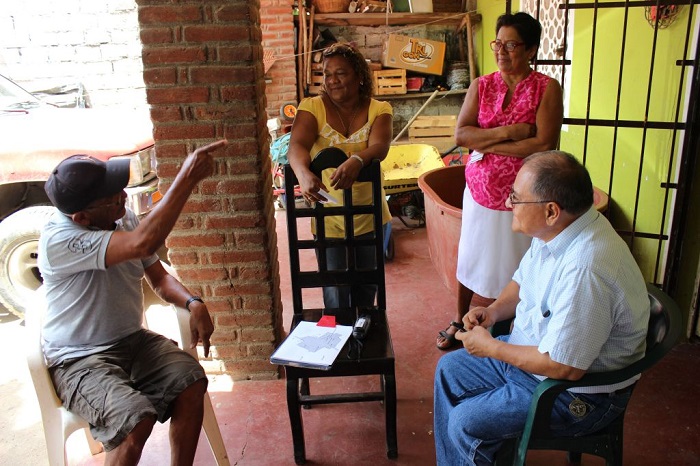 A major conclusion of the CRC initiative is that local authorities have the potential to harness ‘people power’, to forge relevant and effective adaptation actions. They can do this by undertaking highly participatory vulnerability assessments and decision-making processes.

“People often say they do not have enough information about climate change to be able to act on it locally – but this is simply not true,” said Maria Jose Pacha, knowledge coordinator of the initiative.

“We found that in all the cities, biophysical and demographic data was fragmented across different institutions and has gaps, but this information can be compiled centrally and made available to the public as a basis to raise common understanding. Then, citizens can be asked their perceptions of the climate risks they face: this information builds a fuller picture of climate risks and vulnerabilities, as a basis for action.”

“The CRC projects’ success in creating such inclusive processes and decision-making spaces is perhaps their greatest achievement,” said Walter Ubal of IDRC-Canada, which funded the two-year initiative.

“The objective of the CRC initiative has been achieved: to come up with practical solutions for climate resilience,” said Marianela Curi, Executive Director of Fundacion Futuro Latinoamericano.

“As well as academic progress, we have found joint solutions: not ‘top down’ from academia but via a knowledge co-management approach in the field that has integrated people’s experiences,” Ms Curi said.

Many local initiatives – powered by local people’s passion, concern and commitment – have grown out of the CRC projects and now form the basis for practical responses to climate change in medium- and small Latin American cities. Results include:

Local authorities should share evidence on climate trends, risks and vulnerabilities openly and transparently, and should invite local people to contribute their information and insights. In this way, the information will gain broader validity and acceptance and will support a commonly shared ‘diagnosis of the problem’ – making it more likely that shared solutions will be devised and implemented. Local authorities should also recognise that compiling evidence must be an ongoing, iterative process.

There is now also an opportunity for external funders (nationally or internationally) to step up and give far more support to the context-appropriate, agile local initiatives for climate resilience that are blossoming in small and medium sized Latin American cities. Many such activities have now demonstrated proof of concept. They need additional, external resources to be sustained over time and/or scaled up for greater impact. Greater imagination and flexibility will be required on the part of external funders to support such efforts.

Climate finance must go much further to institutionalise gender equality in their project frameworks. This is especially the case for major international public financiers -- who lead the way and set norms. The major opportunity to integrate gender equality is at project preparation stage, when robust gender assessments can tease out the variety of social, economic, cultural and political barriers that suppress women’s full participation in climate projects, and address these barriers at implementation stage, to ensure a level playing field. At present, gender assessments are too often ‘tick box’ exercises without follow-through in project implementation.

The action research projects are described in full on this project page (English) and on a dedicated website, www.crclatam.net (Spanish).

Climate change is already disrupting rainfall patterns and causing warming in Latin America region – trends which are only expected to continue until mid-century and will be made worse unless greenhouse gas emissions are curbed immediately. Latin America is considered particularly at risk of freshwater scarcity, flooding and landslides, increased disease and food insecurity as a result of climate change, according to the IPCC’s Fifth Assessment Report. Analysis by the CRC initiative found that persistent poverty, weak local governance and poor quality city planning are all compounding people’s vulnerability to climate change in small- and medium-sized cities.

This story is based on the draft synthesis report of the Climate Resilient Cities in Latin America Initiative (February 2019) by Gabriela Villamarin, Maria Jose Pacha, Alexandra Vasquez, Mireya Villacis and Emily Wilkinson. Additional reporting from the Final Reflection Workshop Quito, 8 February, and authoring of this blog by Mairi Dupar, CDKN Technical Advisor.

The CRC Initiative was a two year programme managed by FFLA and supported by CDKN and IDRC-Canada.