Since CDKN last reported on climate action in the flood-prone ‘tri-border area’ of South America, local leaders have made progress in developing the institutions to tackle climate vulnerability. The Climate Resilient Cities in Latin America team reports.*

The tri-border area of South America (Triple Frontera in Spanish) is so called because it is a ‘junction’ where the borders of Brazil, Argentina and Paraguay meet. It is also where the Paraná and Iguazú rivers converge.

For people, too, the tri-border area is a meeting place: the three cities of Foz do Iguaçu, Brazil, Puerto Iguazú, Argentina, and Ciudad del Este, Paraguay are close neighbours here. Together, they form one of the fastest growing urban conurbations in the entire South American continent. Since the 1960s, the area’s population has increased seven-fold, with poor city planning. This is largely because the area is home to one of the Seven Wonders of the World, the Iguazu waterfalls, which draws tourists from all over the world.

In recent years, the cities have suffered numerous impacts from extreme weather events such as floods, hail storms, strong winds and heat waves, aggravated by El Niño. Furthermore, there has been an upward trend in the area’s annual rainfall, over the past fifty years.

According to project estimates, the damages from extreme weather reached at least US $ 40 million from 2013 to 2017. These three cities lose between 0.2% and 0.4% of GDP per year because of extreme climate events – up to around US$ 8.3 million.

The tri-border area’s demographic surge, together with the underlying physical geography and the advent of climate change, create many risks to human wellbeing.

Combined, these factors create an area that is “exposed to extreme weather events and has numerous vulnerabilities (poverty, economic and political instability, lack of resources and infrastructure).”

As detailed in our last blog, a research team from the Climate Resilient Cities Initiative led by Leeds University found that urban planning and infrastructure provision in the tri-border area has failed to pace with population growth and climate change. In the words of the vulnerability assessment, it is “vital that [the tri-border] cities undertake actions to reduce their vulnerability to climate change and [pursue] climate-resilient development.”

The research team conducted a participatory study with a total of 73 quantitative and qualitative indicators, to generate a Urban Vulnerability Index for each city. This study included an analysis of past trends and future projections – and pointed to the urgent need of the tri-border area to increase its resilience. The team then consulted with local organisations and communities to collect ideas on how to reduce climate-related risks and presented these ideas to city leaders.

As a result of this work, the three cities committed to pursuing a shared climate resilience agenda incorporating:

(1) the creation of the first Development Council for the Tri-national Region of Iguazú;

(2) the creation of the Tri-national Network of Climate Sciences;

(4) ) membership by all three cities of the international "Making Cities Resilient" campaign of UNISDR.

Here we explore in greater detail what has happened with the first of these, the Tri-national Development Council, and some of the challenges and opportunities it poses for governing the region in an integrated, climate-resilient way. 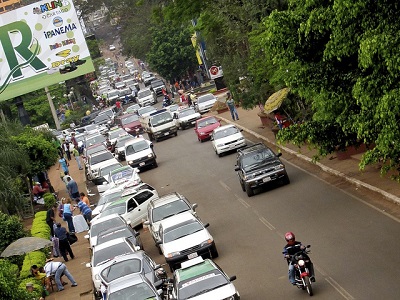 Creating a Tri-national Development Council : lessons learned from the process

From the start, the research sought to identify how the three cities were already cooperating – and how cooperation could be strengthened to tackle climate change impacts together. One of the suggestions was to create a tri-national council for the region, an idea that had been explored by previous projects.

The consultation process revealed many differing opinions on how the tri-national council could be organised and how it could function. The big issues were: how it could be formalised, considering the differences in laws and institutional arrangements among the three countries; and whether to create one organisation addressing many common themes, such as climate change, economic growth and tourism development, or to create separate councils for single themes.

The project team interviewed the three local councils and other local organisations to explore other mechanisms. Then, an opportunity arose to present the general proposal for a tri-national body to the Parliament of Mercosur (Parlasur), which was an important step in maturing the idea and securing formal support.

Cecilia Britto, Member of Parliament of MERCOSUR, said: "This [is an] initiative that is concrete, it is unique and exceptional. The challenge is to focus on the integration of the three cities, taking into account that each one has different  institutional and legal systems. We need to look for articulation and homogenisation of  laws that can generate political and public actions and so that these cities become more  resilient.”

The process culminated in the signature of an agreement among the three local development councils to create the Tri-national Development Council of the Triple Frontier (Consejo de Desarrollo Económico, Social y Ambiental de la Triple Frontera (CODETRI), with the support of other organisations such as Instituto Internacional Polo Iguassu (a tourism development body).

What happens next? The future for local, tri-national cooperation

Although it is still early to assess concrete outcomes from this initiative, the preparatory work behind it – the mobilisation to create the Tri-national Development Council – has provided opportunities for the local actors to discuss common problems and goals, as well as ways to tackle them. The signature of the agreement represents a lot of good will and motivation to cooperate, among local leaders. The process has also represented an opportunity to strengthen the local development councils, especially the local council Codespi (on the Argentinian side).

On the other hand, to avoid the new council’s effectiveness diminishing in the future, or its becoming centred entirely on single issues such as economic growth, it is important to guarantee the wide participation of other local actors and organisations in its structuring and functioning. In this regard, the CRC project made efforts to diversify participation. The project also worked hard to inject climate resilience perspectives and to encourage regional development planning to be climate-compatible.

We now expect that the creation of the trinational council will provide benefits such as:

We also note the important role that national and international-level bodies can play in supporting cooperation between cities, as Parlasur did in this case. Sometimes, political, institutional or cultural differences may require coordination beyond the local level to facilitate the creation of common agreements and agendas for action.