'One river, all its water' : Bringing climate and gender perspectives to water management in Patagonia

'One river, all its water' : Bringing climate and gender perspectives to water management in Patagonia

It's challenging to communicate scientific information clearly for use in public policy-making. A group of researchers from Argentina took up the task, and sought to introduce climate and gender concerns into management of the Chubut River basin in Patagonia, Argentina. CDKN’s María José Pacha reports.

Seed funding for an innovative project

The project, Water Management and a Gender Perspective for Tackling Climate Change Impacts in Chubut (Argentina), is one of 100 interesting proposals that were developed by participants attending the course: Effective Communication on Climate Change. The course was run by Climate Knowledge Hub for Latin America (Clik Hub) between May and June 2020. Five projects were selected to receive seed funding for implementation with support from CDKN and FFLA. The projects are currently in progress in Argentina, Chile, Colombia, Ecuador and Peru.

Dr. Natalaia Pessacg and her colleague Dr. Ana Liberoff from Patagonian Institute for the Study of Continental Ecosystems (IPEEC-CCT CONICET CENPAT in Spanish), working alongside a team of scientists from various institutions, have carried out numerous research studies into climate change impacts on the Lower Valley of the Chubut River.

Until now, however, the research findings had not been made accessible to the relevant decision-makers. So this project was born, to communicate the impacts that climate change is having on the quality and quantity of water in the valley and to raise awareness of the need to incorporate gender concerns into regional water policies.

Natalia Pessacg explained that “the project sets out to create connections and spaces for dialogue and reflection among decision-makers; and also drive the understanding that a gender perspective is pivotal to the water problems experienced in the area”.

The project also aims to reinforce the importance of scientific knowledge in the decision-making process. She added: “our work does not end with a research paper but with a transformation between the new knowledge and decision-makers that results in actual contributions to change”.

The region can be characterised as follows: 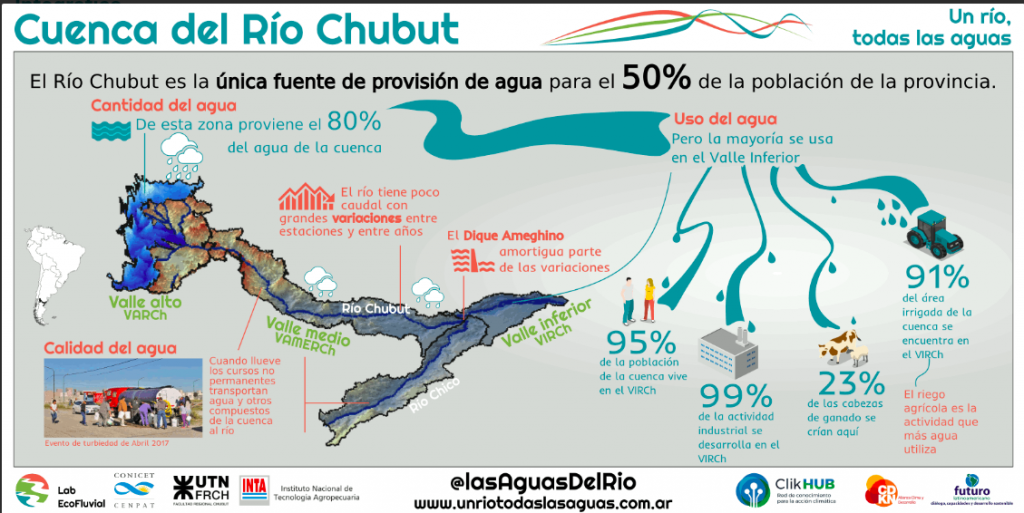 The Chubut River connects and crosses jurisdictions, environments, societies, socio-productive sectors, interests and above all people – with this in mind, two virtual workshops were held in November 2020, called Water Management and Gender Perspective. The workshops addressed the impacts of climate change on the Chubut River and created an opportunity to collectively think about different strategies and actions aimed at the conservation of water resources, to evaluate the effects of climate change and to reflect on the need to incorporate diverse perspectives into management. In the opening talk, Dr. Carolina Vera, Chief of Staff of the Ministry of Science and Technology said, “Disasters are never natural. If there is a disaster, it exists because of a situation of vulnerability that needs to be addressed”.

Under the banner – One River, Many Waters – more than 40 people participated in the virtual meetings. Government employees and scientists looked at case studies, exchanged views and participated in various exercises in a dynamic multi-disciplinarian exchange looking at actions to take now and in the future that consider climate change and the danger it poses to land, water and people.

All these tools can be found on the project webpage: One River, Many Waters [in Spanish]. 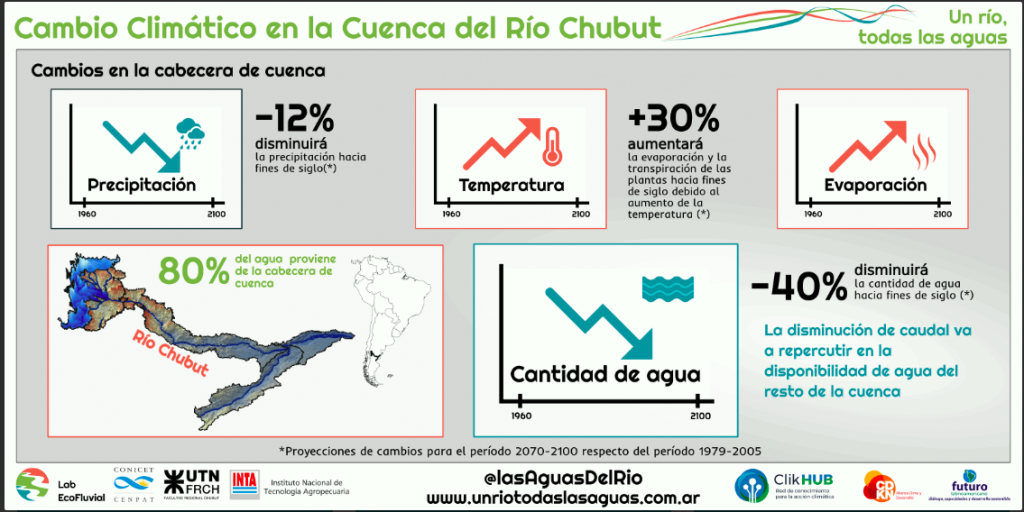 Climate change affects women in a specific way, mainly due to the culturally assigned roles women play. For example, women look after the home and family, so they are more exposed to risks as they are bound to the home in this region. Climate disasters such as floods mainly affect the poor and 70% of the poor in the world, are women.

The Find Yourself through Diversity Foundation were tasked to tackle the topic and train the team as well as facilitate the online workshops. Florencia Fisch from the foundation coordinated the workshop content and said that “participating in the project made me realise that climate change, our rivers and waters are important to me, I began to think about how I can contribute towards a more equitable future, also in terms of natural resources”.

As the process progressed, the researchers began to reconsider their way of working – as well as their behaviour overall. In an article titled Lessons Gained, Pessacg expressed it as follows: “a gender perspective can be applied to many contexts. Not only is it relevant to our scientific work but it is also applicable to us as people. What we learned and discussed was extremely inspiring to me, not just in terms of my work but also my personal life”.

Although the results of this work are difficult to quantify, the participants highlighted the importance of having made new connections and the commitment of the participants to continue working together.

“I believe a fundamental gain was that of opening channels of communication for dialogue between science, civil society, the state and communities – in search for new solutions or understandings of the problems in collaboration with each other. A real commitment and genuine interest within the research team brought us together to learn and teach, listen and share, ask questions and contribute knowledge,” said Fisch.