With climate science evolving but remaining uncertain, how can journalists accurately communicate about climate change in the media? And, how can they break through the national perspective of their media outlet to give the regional story of climate change?

The 24 journalists selected from Bangladesh, Bhutan, India, Nepal, Pakistan and Sri Lanka as the CDKN/Panos South Asia Climate Change Award (SACCA) media fellows for 2013 and experts tried to find an answer to this question at a training workshop organised in Kathmandu in April.

For example, Nepal and Bhutan are mountain countries sandwiched between two emerging economies, India and China, which have high rates of GHG emissions (in absolute terms). Considering that Nepal and Bhutan are likely to be at the receiving end of the impact of these emissions from their neighbours, they have to work diplomatically to prevent this from happening. 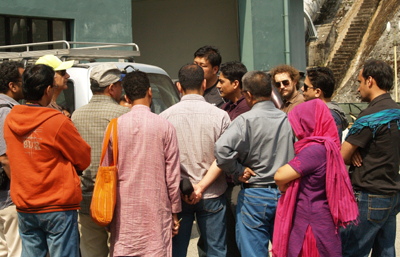 Similarly, glacial melt, glacial lake outburst floods and drought in the Himalayan rivers can affect more than one country. Understanding these issues from a regional perspective will give journalists greater depth while reporting on climate change in their media organisations.

The training workshop was coordinated by two well-known environment journalists from the South Asian region –  Kunda Dixit, Editor,  Nepali Times, and Nalaka Gunawardene, Director, TVE-Asia Pacific. Together they approached the issue of climate change from two perspectives of the snow-capped mountains of Nepal and the coastal lowlands of Sri Lanka.

Dixit and Gunawardene took the journalist fellows through the dynamics of climate change reporting, as it fits within the pulls and pressures of the news priorities of South Asian media houses. “There is nothing called a pure environment story,” said Dixit. “A good environment story is also a good political story and a strong economic story. Only then will it catch the editor’s and readers’ attention.”

Gunawardene, explained about the strength and limitations of the different media – print, television and online – and how to blend them together to communicate in an informed and imaginative way about climate change. “The key to connecting to the larger climate change issue is to tell more unique, local stories,” he said. “Focus on the audience and use emotion and narrative.”

The fellows were then joined by a few experts that represent various sides of the ‘story’ – policy-makers, NGOs, researchers. This interaction not only gave them the latest information on climate change and ideas for new stories, but also allowed them to question and even challenge the experts on how to turn their work into an attractive media piece.

Ganesh Shah, former Minister for Science, Technology and Environment, Government of Nepal, explained the policy perspective to the participants. “The South Asian region is complex, complicated and vulnerable from a climate change perspective,” he said. “Climate change can affect water supply, agriculture, livestock and livelihoods in an already poor and vulnerable region. Climate change can also aggravate migration from regions as they get adversely affected.” 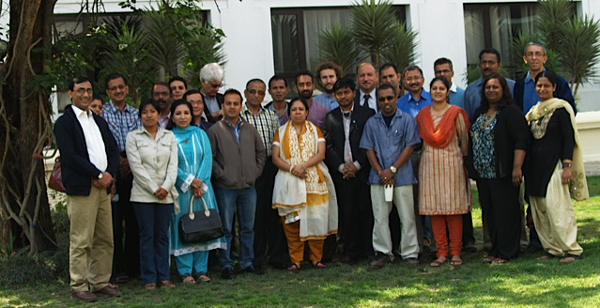 Pramod Aggarwal, Regional Programme Leader for the Climate Change, Agriculture and Food Security (CCAFS) programme under the Consortium of International Agricultural Centres (CGIAR), then gave a case study of the agriculture sector, presenting its complex two-way relationship with climate change. While agriculture could be adversely affected by climate change, farming could also cause climate change.

The CCAFS programme is experimenting with the concept of climate-smart villages in Bangladesh, India, Nepal and Sri Lanka. In these villages scientific research and pilots for mitigation and adaptation are being carried out to promote climate resilient agricultural practices. The journalists could immediately see the potential to connect a broader piece on the impacts of climate change on agricultural with stories from the villages themselves.

An interesting blending of ideas happened when the fellows questioned the presenters from their varied perspectives. How can the linkage between biodiversity and climate change be a business story? How do we communicate about global warming when in some parts of the world the weather is becoming consistently cooler? How can we talk to our readers about glacial melt when the glaciers are actually growing in the Karkoram region of Pakistan? 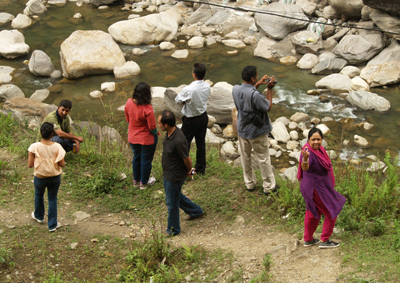 At the end of the programme, the team travelled to Bhotekoshi to see for themselves the regional nature of the climate change issues. Kunda Dixit guided the participants to where he as young reporter in the early 1980s had written about a glacial lake outburst flooding the river. The Bhotekoshi river flows into northern Nepal from China (the Tibetan plateau) and later joins other rivers and reaches the Nepal plains and passes into India as the mighty Koshi river. The Koshi, in turn joins the Gangetic system and enters the Bay of Bengal through Bangladesh. The journalists returned full of ideas for new ways to report on the regional dimension of natural disasters which affect their countries.

Following this training, the SACCA media fellows will report stories on climate change through their media organisations during a nine-month period. You can follow them on their journey to learn and report more about climate change, including the stories which the fellowship has facilitated, on their blog.

The media fellowship programme, now in its second year, is funded by the Climate and Development Knowledge Network (CDKN) and implemented by Panos South Asia.