During crisis, Latin American leaders stand for a sustainable future

During crisis, Latin American leaders stand for a sustainable future

A group of Latin American leaders including the ex-presidents of Chile and Mexico, Ricard Lagos, and Felipe Calderón, ex-ministers of environment and members from the private sector, civil society and academia convened to produce a declaration entitled ‘Principles for a Sustainable Future for Latin America in time of Global Pandemic and Crisis’. Addressed to the world on behalf of Latin America, the declaration emphasises the systemic and interdependent nature of public and private policy. It offers recommendations for a sustainable renaissance in the region that is propelled by scientific knowledge, solidarity, a new form of business, cooperation and complementarity and a modern, inclusive state that paves the way for welfare economics, not just growth economics.

While the world faces the worst crisis since the Second World War, with countries grappling to respond to the current health and economic emergency, this pandemic has exposed the systemic crisis in health, climate and biodiversity resulting from human interference with nature, a reminder of our dependence on fragile ecosystems.

With precarious health systems, compromised access to drinking water and limited health services, Latin American countries find themselves in similar positions in the current situation in terms of vulnerability and capacity for dealing with a systemic crisis. Around 50% of the labour force are informally employed and cannot access social benefits. More that 80% of the population live in urban areas with excessive demands on resources and unsustainable levels of production and consumption, which reflects an ignorance or a disinterest in the limitations of our natural resources.

In spite of this, the crisis provides an opportunity. In response to the current emergency, governments have begun acting and implementing fundamental health and economic measures. They are re-evaluating production and consumption models, recognising the value of natural infrastructure with its goods and services as well as limitations and scientific opinion has been repositioned as informative in political decision making, deepening the debate about what economic activities can suitably respond to current and future social and environmental challenges and considering solutions based on nature. A better understanding has emerged of the gravity of other long-term systemic crises such as climate change and accelerated loss of natural resources. This crisis has also shown that actions of solidarity arise in times of uncertainty. 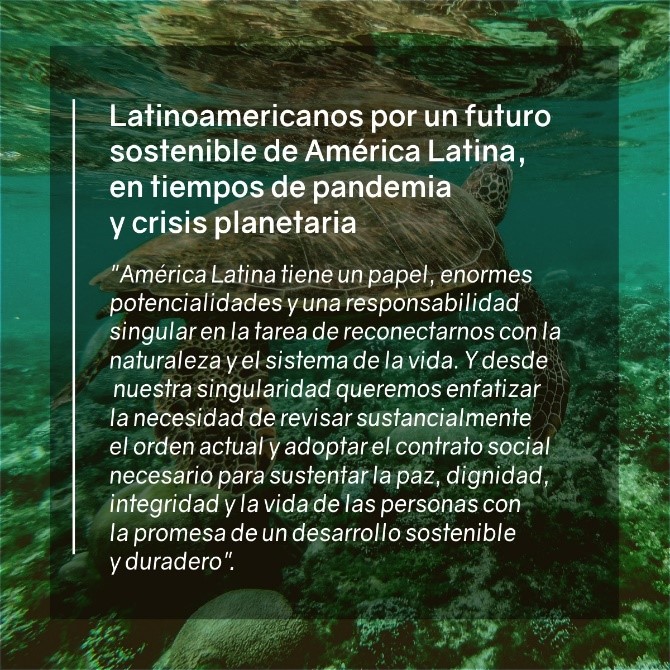 Translation: Latin Americans for a sustainable future in the context of the global pandemic and planetary crisis

‘Latin America has an important role, huge potential and a singular responsibility to reconnect with nature and living systems. From this specific standpoint we want to emphasise the need to substantially review current systems and to commit to a social contract that will sustain peace, dignity, integrity and lives through the promise of sustainability and durability’.

In this new context, a group of Latin American leaders - composed of academics, private sector and civil society representatives and ex-environmental leaders - signed the declaration titled ‘Principles for a Sustainable Future for Latin America in times of Global Pandemic and Crisis’ on 27 May 2020.

The document puts forward recommendations for a sustainable renaissance for Latin America and emphasises the central role of scientifically informed knowledge, solidarity, cooperation and complementarity between nations and the need for economic stimulation plans to include climate considerations in recognition of the limitations of nature.

Essential for this is the renewal of climate change and biodiversity commitments in the framework of Sustainable Development Goals (SDGs). The post-pandemic world will not be the same, and due to increasing societal demands on the planet, the declaration emphasises the need for a ‘new agreement between humans and nature’ which positions commitments by states and other stakeholders in a framework that aims to reverse the processes which cause global environmental deterioration. Latin America has enormous potential and a unique responsibility to reconnect with nature and living systems as it shares elements of culture, language, heritage and ancestral knowledge of the original peoples of the region, as well as natural capital that offer conditions for developing a regional strategy for cooperation.

Webinars will be held to facilitate the conversation as part of a series of actions accompanying the declaration. The first of these webinars took place in mid-June, more information about the webinar here (in Spanish). The second webinar, again featuring former environmental ministers from around the region, takes place on Thursday 16 July 2020, more information here (in Spanish).

The aim of the conversations is to initiate a process of deep reflection on what a renewed understanding of the region would look like, and to generate a collective and sustainable vision for the region. In recent declarations in Costa Rica, Christian Figueres, former executive secretary of the United Nations Climate Change Framework Convention and one of the signatories of this declaration, states that in the next 18 months enormous global investments will be made, determining the destiny of the planet in terms of economic recovery and climate change.

In Figueres’ words ‘these three crises must be approached simultaneously, ensuring that the solutions are convergent’.