The Eastern Africa Grain Council has been documenting the climate adaptation successes of leading women farmers and agricultural business owners in Kenya – as a way to galvanise learning among other women.

Extreme weather events already affect agriculture in sub-Saharan Africa. Whether it’s heat waves, droughts, floods, cyclones or other extreme events, these can ruin crops or stunt their growth in the fields, and disrupt distribution and marketing systems.

Unfortunately, the future portends more such risks, even under low to medium global warming scenarios. According to the Intergovernmental Panel on Climate Change’s (IPCC) landmark 2014 assessment : climate change is very likely to have an overall negative effect on yields of major cereal crops across Africa; losses could be 22% aggregated across sub-Saharan Africa.

This is the focus of a project by CDKN and the Eastern Africa Grain Council (EAGC). Together, they have been implementing an initiative called “Mitigating the Effects of Climate Change on Grain Quality and Losses” in Kenya and Uganda.

In sum, EAGC and CDKN aim to improve people’s knowledge, skills and institutional linkages along the whole grain value chain, from planting, to harvesting, to storage and distribution, to be climate risk-informed.

The project has a particular focus on supporting women in grain value chains to manage climate-related risks. As part of this, EAGC has trained women farmers and business owners directly on the use of climate-appropriate varieties and technologies. In November-December 2020, Penina Gichuru of EAGC interviewed women farmers and business owners who had participated in project training, to find out how they have been putting the new information into practice – and the results.

In the following testimonials, Ms Gichuru translates the women’s stories (told in Swahili) into English.

Jane Njoki Gititu is an arable farmer in Nakuru county, Kenya. Thanks to an EAGC training, she planted a new early maturing maize variety on one acre of land in 2020. This has yielded promising early results. 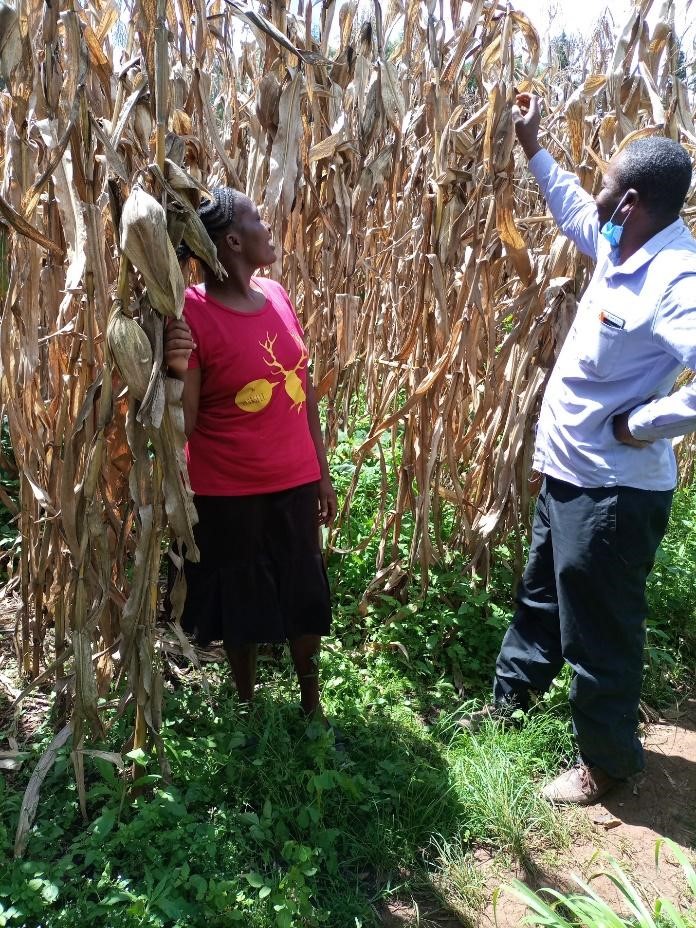 “This season I planted a new variety of maize DC 890 which is early maturing,” Ms Njoki explained. “I planted one acre of the variety while in other two parcels of land, I planted the conventional varieties I have grown before: HB624, HB628 and HB6213.”

“This new variety grows fast and matures within a short period and therefore is able to yield some produce during periods of low rainfall hence “Ni ya kuokoa mji” meaning “it is for saving families”.

“The maize planted in April matured two months earlier than the other two varieties and was harvested in September to early October while the other varieties were harvested in November and December.

The [new] crop performed well and though I have not threshed the maize, I estimate I will get 15 bags from that acre. This is a good yield considering that the field has heavy soils not known to support good crop yields.”

“During the crop-growing period my neighbours were amazed at how fast the crop grew and came to enquire about the variety: which variety and which source of seed. I shared the information since I had preserved the seed package. Now, I expect more farmers to grow the seed in the coming season”.

Mrs Njoki is also the Treasurer of the Laare-Kiriri-Bagaria community-based organisation in Nakuru county. As part of EAGC’s training to the local group,  Ms Njoki learned about hermetic bag storage technology – which is a safe way of storing maize air-tight, which keeps air-borne spores and animal pests out of the grain. While these risks of grain spoilage have always been there, climate change, with the possibility of wetter conditions and temperature shifts in some locations, is expected to support the incidence and spread of pests, and conditions such as mould and mildew. (Climate projections for eastern Africa show that the region is anticipated to receive heavier rainfall in the future.)

“In 2019, I acquired 10 hermetic bags to store my maize for home consumption,” said Ms Njoki. “I dried the maize to the recommended moisture content and weighed 90 kgs in each bag. I instructed my son to tie the bags as recommended, ensuring that all air is removed before tying up the inner plastic bag. He then tied each layer as recommended and the bags were stack in the store.”

“My family has consumed that maize from November last year (2019) to date without a single trace of pest damage as used to be the case with ordinary bags. I sold some of the maize in May 2020 to meet the cost of weeding the current season crop. Even at that time the grain had no pest damages." 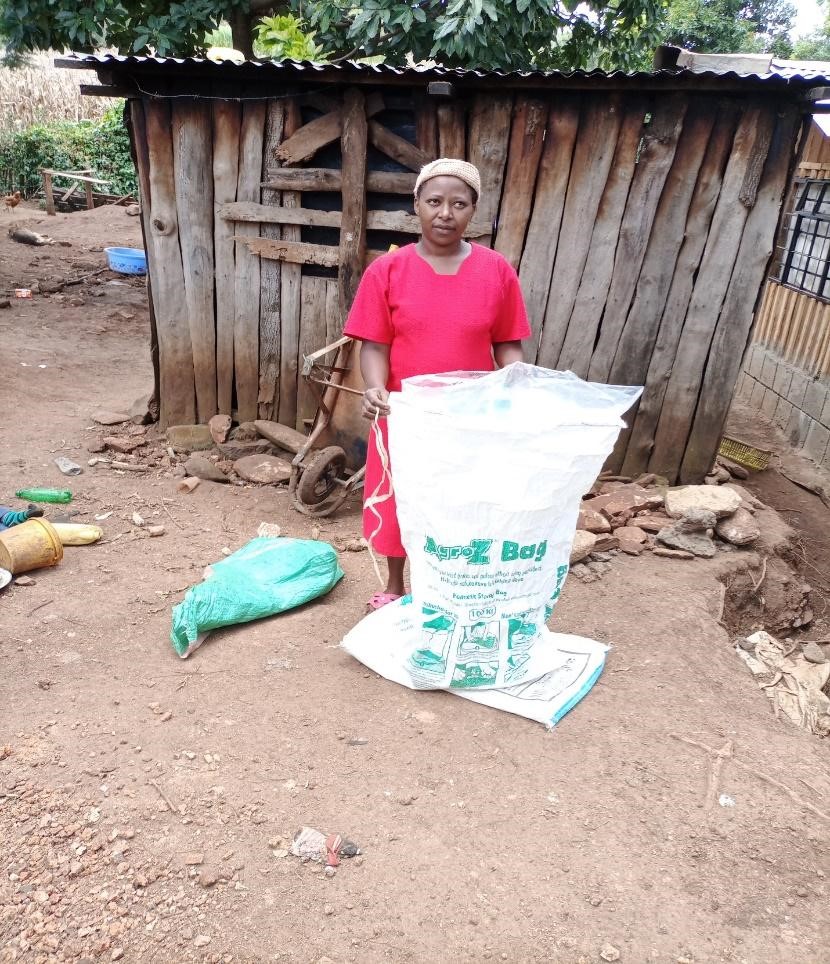 "Recently, my neighbours approached me to exchange for them their current season grain with my stored grain as it is believed the older grain produces better flour.”

“My neighbours have been so impressed to see how clean the grain is and have been asking how they can get the bags. I expect this will influence more people to purchase and utilise the hermetic bags going forward.”

Milka Nyambura, a member of Kangumo youth group in Laikipia County, Kenya, also tells a story of how adopting this simple technology has been transformational. Recounting her story, Ms Nyambura said:

“We really want to thank EAGC for supporting us to buy hermetic bags. Previously we used to store our maize grain in the ordinary nylon bags and we had a lot of problems because even if you cleaned your grain well and stored in the bags, the maize would still be infested by weevils. But now, the hermetic bag has helped us a lot. Maize stored in hermetic bag does not get infested by weevils and even if the maize had been infested before bagging, once you put in the hermetic bag the weevils die and your maize remains clean and can be stored for a long time.”

“I would advise all the grain farmers to use the hermetic bag to store their grain to avoid spoilage and grain loss.”

Image above: Milka Nyambura with a hermetic grain storage bag

Meanwhile, Joyce Njeri, of the Majani farmers cooperative in Laikipia, Kenya has benefited from training on conservation agriculture techniques, which are also proving beneficial in the face of unpredictable rains. EAGC has been documenting her successes as real life examples, which helps in training other women farmers.

Joyce Njeri is one of the leaders of the Majani Cooperative group and has adopted the conservation agriculture practices of water-retaining trenches, water pans, small-scale irrigation, zero-tillage and terracing, among others. 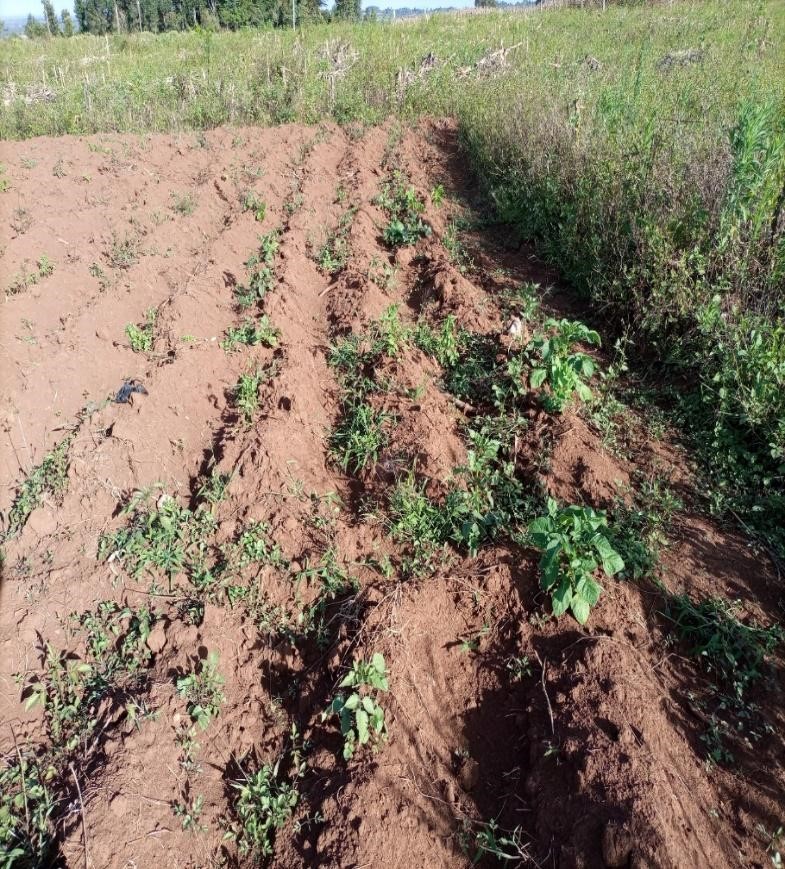 Image, left: Water retention trenches prepared on a section of a crop field

The water trenches are small one metre wide by 30 centimetre long troughs prepared across the entire crop field for the purpose of water harvesting and as a fertility trench. Ms Njeri explained that she applies manure and fills the troughs with water. The troughs are beneficial as they eliminate run-off during the rains and retain water for a longer time. It is also possible to apply mulch along the trough to reduce water loss from evaporation.

A water pan on her farm is also proving to be highly effective, as she explained: “One day I was walking on my farm and found a section where water was oozing from the ground. I took a hoe and dug a small hole and the water filled the hole quickly and I decided to dig a water pan there [with the help of my sons]. The pan has good amount of water and I use a pump to lift the water into a tank placed at the crop fields, which is used to water seedlings in a nursery. Also, the water is pumped directly and used to irrigate the field crop by filling the already prepared water-holding trenches.”

It is hoped that by training women farmers such as Ms Njeri to apply climate-smart, conservation agriculture techniques such as these, she, too, will create an important ‘demonstration effect’ for neighbouring farmers. These practices will help Ms Njeri and others to deal with the vagaries of too much, or not enough, rain.