There was a mix of progress and backsliding on diversity and inclusion in climate policy-making, at COP27 in Sharm El-Sheikh, Egypt. CDKN's Mairi Dupar unpacks the recent developments, particularly related to children, young people and women.

On the positive side, the Sharm El Sheikh Implementation Plan acknowledged the intense energy and engagement of young people in the UNFCCC process, with several paragraphs dedicated to youth. This was the first COP to have a Youth and Children’s Pavilion and youth-led climate dialogue. Greta Thunberg may have sat out this COP, but other impassioned, articulate young leaders garnered attention with their pleas for accelerated global action –  Omnia El Omrani, Youth Envoy for the COP27 presidency,  Vanessa Nakate of Uganda, Licypriya Kangujam (11) of India and Nayeeyat Dramani Sam (10) of Ghana among them.  In this COP, young people were permitted to be part of national delegations; a Youth COP preceding the main COP27 trained 1,100 young people in negotiations and 27 of them joined their national delegations. The COP27 text urges governments to include young people meaningfully in climate decision-making, including in official delegations to future COPs. 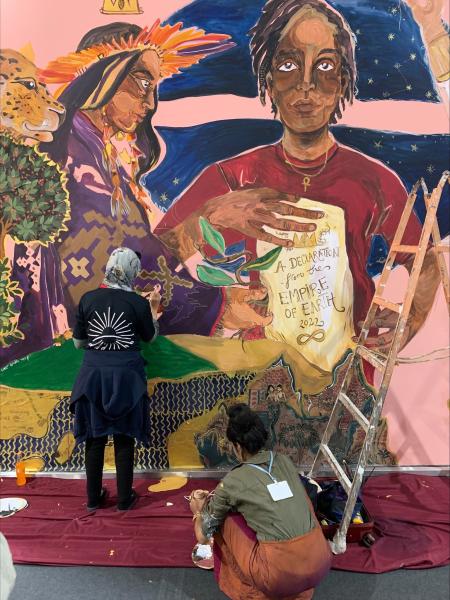 CDKN recently flagged the importance of the UNFCCC’s Enhanced Lima Work Programme on Gender as a driving force for the inclusion of gender equality ambitions in countries’ climate plans, the NDCs. Our conclusion reflects the evidence we see of increased gender mainstreaming in climate planning. However, COP27’s gender text also acknowledges the bad news that the Covid-19 pandemic “deepened existing inequalities, including gender inequality and negatively impacted the Lima Work Programme”.

The COP’s conclusions are sound: governments need to strengthen their resolve on gender equality by taking intentional steps to empower women as they pursue climate-resilient, low-carbon development. It doesn’t ‘just happen’ by itself. The COP took a practical step by acknowledging the need for gender-responsive budgets to support this ambition.

In the UNFCCC talks themselves, recent progress on gender equality appeared to be lost. Fewer than 34% of climate negotiators at COP27 in Sharm El-Sheikh were women, down from the previous year and the year before that.

One of the biggest challenges so far has been getting a diverse pool of women to rooms where decisions on climate change are made, even before countries gather for international negotiations, said Ko Barrett, Vice Chair of the IPCC (as quoted in Inside Climate News). “Often at a national level you don’t see that kind of gender equality,” Dr Barrett said.

I note, too, that women from minoritised groups such as Indigenous and ethnic communities, younger age groups (see above), lower castes and women living with disabilities can struggle to gain representation in national delegations. Diverse women’s representation will be an area of focus for CDKN in its next five-year phase. Note: CDKN will also be working hard on leadership from the Global South and local communities in climate policy-making more generally (essential topics which merit further blog treatment altogether!)

Mechanisms for loss and damage governance

Looking ahead, COP27 decided to set up and resource a Secretariat for the Santiago Network on Loss and Damage, whose mandate is to match providers and receivers of technical assistance to address climate-related loss and damage. The Board of this Secretariat will have representatives of the women and gender, young people’s and Indigenous people’s constituencies on it. These are promising developments.

And, of course, the biggest news of COP27 was that a dedicated funding arrangement will be created, under the UNFCCC, to address loss and damage in the most vulnerable countries. As this new fund is designed, capitalised (i.e., receives money) and begins operating, it has the potential to learn and apply best practices in gender equality and women’s empowerment from existing climate funds and avoid the failures of the past.

Egypt made ‘just transitions’ a key theme of its COP27 Presidency. The ‘just transitions’ concept, in short, recognises that there are deep social and governance changes implied as economies shift from high fossil fuel dependency and natural resource degradation to low (or net zero) emissions and living within planetary boundaries. The character of people’s work will change. People’s relationship with the natural environment as producers and consumers will change.

Egypt hosted a forum on 'just transitions' with the long name: ‘Forum on the impact of the implementation of response measures’.

The ensuing text, adopted by COP27, calls for countries and observer organisations to do better in assessing the social and socioeconomic impacts of climate change mitigation.

This includes applying and sharing methods to assess the impact of new technologies and approaches for avoiding emissions and storing carbon.

While it is welcome that COP27 gave high priority to the management of transitions and minimisation of harms, it is deeply disappointing that gender figured nowhere in the just transition decision (above) nor in the just transitions text of the overarching Sharm El Sheikh Implementation Plan. Much attention by countries to date has been on transition plans for the male-dominated workforces of fossil fuel extractive industries.

There is a need for focus on women and especially rural women in the global South, who face dislocation from natural resource access (even dispossession), as land is repurposed for other uses. Solutions must be forged in partnership with them and in protection of their rights to decent work, food, nutrition and health.

Dig a lot deeper into the thinking behind the COP27 just transitions text and you can find the work programme of the related Katowice Committee and its technical paper primarily about the socioeconomic impacts of mitigation . Encouragingly, the Committee’s paper calls for gender- and age-disaggregated social impact assessments. CDKN would like to see gender-equitable, socially inclusive just transitions as a headline issue in the debate – not buried in the fine print.

On the bright side, the COP27 text presents an important opportunity, by: “Invit[ing] Parties and observers to submit via the submission portal by April 2023 their views and guiding questions for the review of the functions, work programme and modalities of the forum.”

I have sympathy with and hope in UNFCCC Secretary Simon Stiell’s pledge to revisit COP processes: both in terms of the transparency and efficiency of the negotiations themselves and the extent of the exhibitions and side events that run alongside. This year, according to the FT, some 45,000 people attended, including exhibitors and observers – and 600 fossil fuel lobbyists.

I hope Mr Stiell looks at the potential for low-emissions, online modalities for the side event and exhibition spaces. During the pandemic, most conferences shifted to virtual mode. Virtual conferencing isn't perfect but it can be managed to be relatively diverse and balanced in the representation of different voices. Comparatively more people can participate. Plus, of course, they avoid flight-related emissions. It may be easier and more inclusive than running the gamut of visa applications, flights and in-person conference queues that face-to-face meeting requires.

In-person, official negotiations will still be needed, but governments could meanwhile work toward diversity within their delegations, as the Sharm El-Sheikh Implementation Plan suggests.