Mairi Dupar and Lisa McNamara of CDKN assess how the COP27 decision and associated policy developments have the potential to reshape climate finance in 2023-24.

The finance needed to transform the world to low-carbon, climate-resilient pathways is still very far from being met. COP27’s Sharm El Sheikh Implementation Plan recognises that US$ 4-6 trillion dollars per year will be needed to support these transformations, worldwide.

Developing countries need US$ 5.8–5.9 trillion for the pre-2030 period to finance the ambitions in their national climate plans or Nationally Determined Contributions (NDCs).

As yet, rich countries have not even mobilised the US$ 100 billion per year in climate finance for low- and middle-income countries, which they promised would be flowing by 2020.

Just prior to COP27, the UNFCCC Standing Committee on Finance (SCF) published four reports that were important “scene setters” for finance discussions: including progress towards reaching the US$ 100 billion goal, and current finance flows.

The reports confirm that while there has been an increase in overall global climate finance flows (12% increase in 2019-2020 over 2017-18), the flows from international public sources are still below the target.

The UNFCCC has noted the differences in accounting methodologies, which make it difficult to arrive at a single agreed figure: the OECD estimates that US$ 83.3 billion flowed in multilateral and bilateral finance from Annex 1 countries (so-called ‘developed’ countries) to non-Annex 1 countries in 2020.

An Oxfam shadow finance report for the years 2017-18 found that reported public climate finance was US$ 59.5 billion. However, once one takes into account countries’ interest payments on loans, etc. and inaccuracies in how the climate component of development projects is counted, the true figure may have been just US$ 19-22.5 billion.

Either way, Annex 1 countries’ contributions are far below what is needed (ODI , 2022), and this failure is undermining developing countries’ trust in the global financial architecture. It has catalysed calls for more fundamental and systemic reforms to that architecture.

The COP27 decision, and associated ideas proposed by developing countries, suggest that significant changes will unfold in 2023-24. 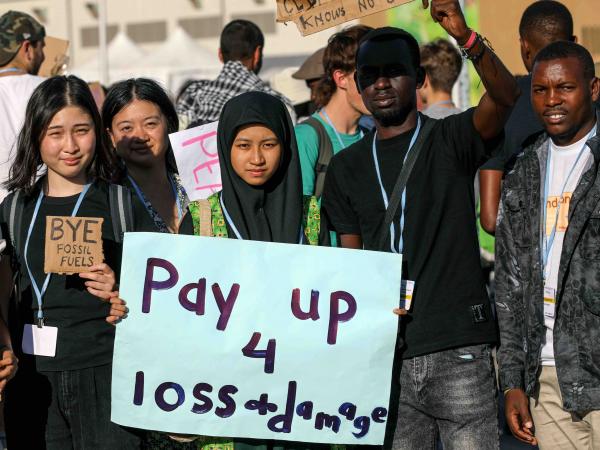 Stunning decision on loss and damage at COP27, but little progress on adaptation finance

An ask for a dedicated loss and damage response fund under the aegis of the UNFCCC was agreed in Sharm El Sheikh – an ask which was 30 years in the making.

The loss and damage funding arrangements will address damage already suffered by vulnerable countries by extreme weather events, such as tropical storms and droughts, as well as pernicious slow-onset losses from climate change impacts like sea level rise and destruction of freshwater supplies.

Almost every aspect of the fund will need to be thrashed out by an appointed committee in 2023: who will pay into the fund and how much, which vulnerable countries will benefit. The Transitional Committee will have 24 members: 10 members from developed country Parties and 14 members from developing country Parties, spread across Africa, Asia, Latin America and Caribbean, Small Island Developing States and Least Developed Countries.

Although there is hard work ahead to bring the fund into force and capitalise it, this decision is a huge step. Its formation recognises the reality that dozens of developing countries that are deeply exposed and vulnerable to climate change impacts cannot steer towards sustainable development when they are hit by one climate disaster after another. Adequate external finance, i.e. grants and concessional instruments to support resilient reconstruction, could give them a fighting chance.

Adaptation finance, meanwhile, must absolutely be doubled by 2025, to 40% of climate finance, as committed at COP26 in Glasgow. It is disappointing that the final Sharm El Sheikh text did not restate the Glasgow pledge on adaptation finance and take it further by setting out a stepwise roadmap to reach that goal (or at least appoint a body to do so). If adaptation continues to be insufficiently resourced and three years go by without that doubling being met, more and more avoidable losses and damages will be suffered by all countries, and by the most vulnerable developing countries in particular.

The climate crisis, sadly, has come to this: countries are suffering unavoidable losses, arising from climate extremes such as category 5 storms (e.g. rainfall and storms will become more intense in some regions, according to the Intergovernmental Panel on Climate Change). Ideally, the new loss and damage fund should be reserved for unavoidable losses arising from such hazards, while at the same time, societies maximise their adaptation potential and climate risk reduction actions - so eradicating avoidable losses and damages altogether. 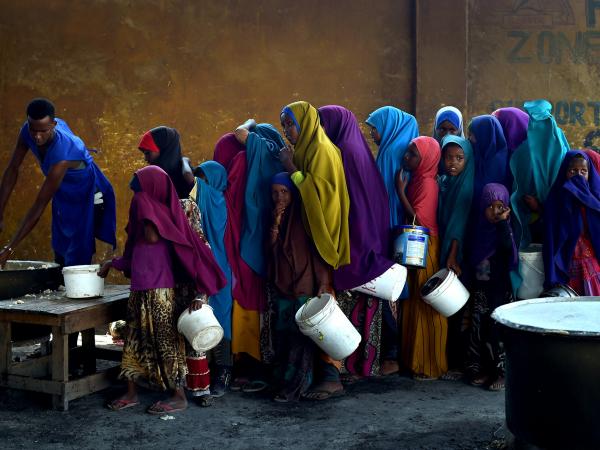 There are increasing calls – including in the side events of COP but outside official decisions – for more attention to two blind spots in climate finance: i) local communities and ii) conflict-affected areas.

Only 10% of climate finance reaches community level, according to current estimates. This must change, especially for adaptation funding, which needs to be highly locally-tailored in order to be effective. Programmes such as the Voices for Just Climate Action have called for a specific sub-goal and target on local finance, to ensure finance flows reach communities on the frontlines of the climate crisis. Enhancing finance for local climate action is also a key priority for CDKN going into its third phase of implementation (2022-27).

Conflict-affected contexts are another area where finance for climate change adaptation and disaster risk reduction are urgently needed to save lives, but donor agencies have been far too reticent. They have intervened only too little, too late, in a humanitarian relief capacity, whereas investments in early warning systems and early action on climate extremes (such as drought and intense rainfall) could greatly relieve suffering and prevent deaths.

Take Somalia, where the horrifying figure of half a million children are currently at risk of drought- and famine-related death. Donors pledged they wouldn’t permit a repeat of the 2011 drought when half a million people died, but now history is repeating itself. Researchers find many references to “governance obstacles, particularly the weak institutional apparatus and institutional vacuum that have characterised the country”. But Somalia’s humanitarian appeal has doubled between 2021 and 2022, from US$ 1.09 billion to US$ 2.27 billion. Denying the country’s need for adaptation support doesn’t make sense.

There are field-tested principles for integrating peacebuilding with climate change adaptation: donors and international agencies need to partner with local actors to apply these principles more broadly.

More generally, international climate finance has been inadequately concentrated on the most vulnerable. In 2019-20, only 25% of international climate finance flowed to Least Developed Countries and 2% to Small Island Developed States (UNFCCC Fifth Biennial Assessment and Overview of Financial Flows, Figure 4). It is in this context of insufficient finance – especially where it is needed most – that reform of the global finance architecture is now on the table.

One of the most notable steps forward for climate finance at COP27 was the text urging a reform of multilateral development banks and other international financial institutions.

An increasingly loud drumbeat of protest was building in and outside the conference halls, from civil society, at the lack of alignment of MDB and IFI finance with the Paris Agreement and its article 2.1c: “(c) Making finance flows consistent with a pathway towards low greenhouse gas emissions and climate-resilient development.”

Barbados Prime Minister Mia Mottley also has a very specific proposition that is gaining international traction. Her Bridgetown Initiative not only points out that the realisation of low- and middle income countries’ climate plans, including lower emissions, needs external finance.

The Bridgetown Initiative highlights, importantly, the increasing indebtedness of these countries in the shadow of the Covid-19 pandemic and their higher costs of capital (higher costs of borrowing). These challenges paralyse policy-makers from taking sufficient climate action.

Her breakthrough proposal urges the IMF to channel unused Special Drawing Rights and use other ‘fiscal headroom’ in the IMF to provide low-cost, long-term capital to borrowers and especially those countries that need to reconstruct resiliently after climate disasters.

These ideas, she has said “have the rarity of being both achievable and meaningful”.

Already the IMF’s Director Kristalina Georgieva has announced, on the cusp of COP27, the operationalisation of a Resilience and Sustainability Trust (with US$ 20 billion from Australia, Canada, China, Germany, Japan and Spain).

The Bridgetown Initiative contains other bold propositions, such as mobilising private sector savings from the billions to the trillions of dollars for climate change mitigation and reconstruction; and the idea of pausing borrower countries’ loan repayments when they are struck by disasters.

President Emmanuel Macron of France has agreed to co-present the proposals with Prime Minister Mottley to the World Bank and IMF ahead of their Spring 2023 meetings, a sign of increased multilateral action. 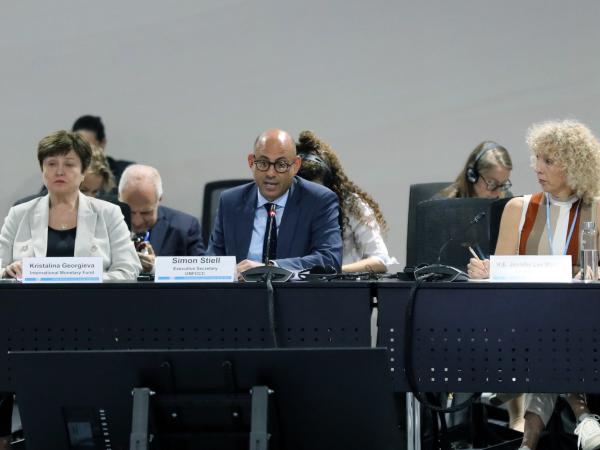 New finance goal to be set

A new finance goal will be agreed post 2024, the New Collective Quantified Goal (NCQG) on Climate Finance. COP27 delegates reiterated we must learn from mistakes from developed countries not delivering the USD$ 100 billion.

Ministers in the High-level Ministerial on the NCQG stressed that we need to set the goal at a scale that reflects the actual finance needs and priorities of developing countries, and focus on both a quantitative target and the quality of finance mobilised and delivered (provided, for example, in the forms of grants and not loans and with attention to inclusion and equity).

“We owe it to ourselves to build an approach that inspires trust, hope and action, one that acknowledges the full and diverse needs of developing countries and links finance to outputs we want to achieve as a global community. The lack of progress in current financial architecture can be overcome if we link needs and priorities to the determination of finance to be provided and mobilised”, said Kenya’s Cabinet Secretary for Environment and Forestry, Roselinda Soipan Tuya.

Making sure that progress towards achieving the new goal is adequately tracked is of paramount importance. “Let’s do this properly this time, with proper planning and tracking arrangements, and ensuring we are supporting in a just transition”, said UNFCCC Executive Secretary, Simon Stiell.

Agreeing a long called-for common definition and methodology for accounting climate finance is also crucial for transparency and effective tracking. COP26 mandated the SCF to work on an agreed definition of climate finance and the SCF produced a first report for COP27, with this work continuing next year.

As CDKN, we are acutely aware of the potential for climate finance spending at country or subnational level to mirror existing biases and reinforce existing discrimination in society. Thus, in parallel, it is vitally important that climate risk assessments look at the different needs of groups in society (not only low-income groups but also women, different age groups and ethnic communities, Indigenous people and those living with disabilities, for example). Climate finance plans and monitoring need to involve them and reflect their priorities.

The next two years will be critical years for setting the new regime for international climate finance with discussions on the New Collective Quantified Goal concluding in 2024.

Meantime, seismic shifts in the international architecture of climate finance may be possible in 2023 as the operation of the loss and damage fund gets underway, and the Bridgetown initiative likely gathers momentum.

The extent of cascading risks experienced by climate-vulnerable countries and communities worldwide demands that high-emitting countries and polluting sectors commit finance to adaptation, mitigation and loss and damage at unprecedented levels. We live in a globalised world. This is in everyone’s interest.

It will take break-out levels of imagination and creativity to make it happen, but after all, isn’t great ingenuity one of the markers of humanity? 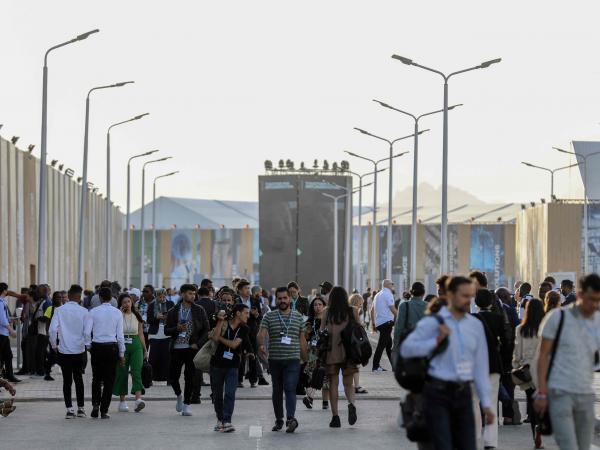