Zizipho Royi of CDKN reports on the increasingly loud voices of young people in the climate change negotiations, including during their own dedicated Youth and Future Generations Day.

The 10th of November was a day to remember for all youth delegates and attendees - The Egyptian COP27 Presidency has prioritised a number of critical areas of attention, one of which is ensuring that the voices of the young and future generation are heard. The COP27 Youth and Future Generation Day aimed to ensure that young people are included in crafting solutions to the climate crisis.

The COP27 Presidency undertook several activities to fulfil this ambition. They included hosting the first ever Children and Youth Pavilion at a COP, the introduction of a Youth Envoy to the process, supporting Conference of the Youth (COY17), launching the first ever Youth led-climate forum, and aiming at removing some of the barriers that normally affect meaningful participation of young people at COPs. 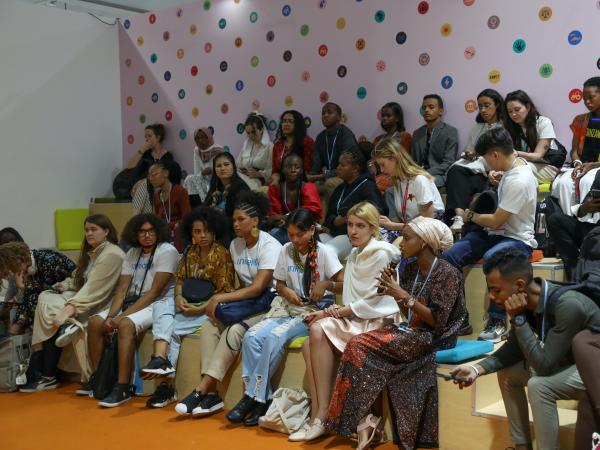 "The decisions we make about the climate process will have the greatest impact on young people. Climate change has a huge impact on young people's health, nutrition, education, and future chances. As a result, young people should be viewed as a natural ally and partner in fighting for climate action," said H.E. Sameh Shoukry, President of COP27, speaking at the Children and Youth Pavillion on the 10th. "Ensuring that the youth are represented and have a seat at the table is of absolute importance as it is their future lives and livelihoods that are directly impacted with the implementation of climate commitments," H.E. Shoukry added. "The youth are the ones whose future lives and livelihoods are directly impacted with the implementation of climate commitments."

On Youth and Future Generations Day, a range of intergenerational dialogues were held, to enable direct engagement between today’s policy-makers and representatives of the generation that will be alive to witness the long-term effects of those policies in action.

The day began with an opening ceremony for the youth-led climate forum and the thematic day. The ceremony brought together high-level policymakers with young representatives from the Conference of the Youth (COY17) to present the Global Youth Statement and highlight the key policy asks compiled by young people from across the world for inclusion in the outcomes of the COP27 conference, as well as to drive climate ambition and implementation. At the opening ceremony, attendees included: Ashraf Sobhy,  Egyptian Minister of Youth and Sports; Dr. Yasmin Fouad, Egyptian Minister of Environment; Simon Steill, Executive Secretary of the UNFCCC; Mahmoud Mohie Eldin, High Level Climate Champion; and senior representatives from the COP27 Presidency Team.

These demands were decided upon during COY17, which brought together over 1,000 young people from more than 140 countries prior to the official opening of COP27, and in the wake of several successful local, national, and regional conferences of youth. 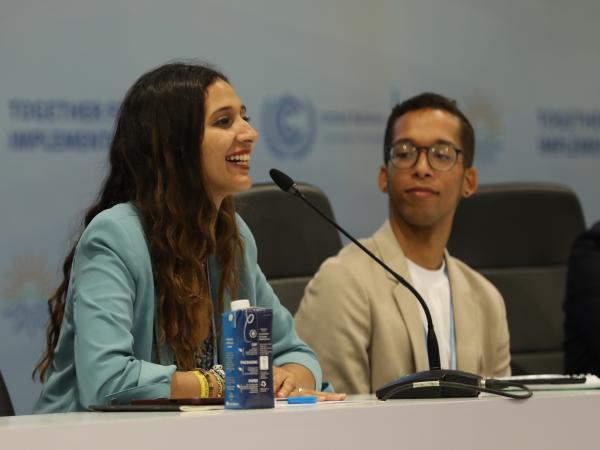 ‘Africa’s young people: a great asset for the continent’s future’

Africa has the largest number of young people in the world, with over 200 million people between the ages of 15 and 24, and it has a young population that is expanding at the fastest rate. Additionally, it is the only region in which the number of young people living there is growing. The amazing youth-led solutions from Egypt and the rest of the continent were displayed at the Young Africa session. During the Young Africa session, African youth experts, entrepreneurs, and solution- makers presented their innovative activities and grassroots initiatives for climate adaptation and mitigation.

The COP27 Youth and Future Generations Day was key in the effort to broaden the narrative around Africa as a hub of opportunities and innovative solutions, and it highlighted the ways in which young people are collaboratively driving action and change, including climate justice and intergenerational equity. Both of these topics were discussed at the event. During the Youth and Future Generations Day at COP27, young people urge the world leaders in attendance to increase the financial support for communities, including women, children and young people, who are particularly vulnerable to the harsh reality of extreme climate disasters.

The most contentious issue at COP27 was climate justice. It came up following the calls for funding for loss and damage due to the destruction in poor nations that have contributed the least to the climate issue.  Intergenerational justice transcends all boundaries, but it is especially urgent in Africa, which has the world's youngest population. Young people are the most susceptible to the adverse effects of climate change, including extreme weather events, toxic chemicals, temperature shifts, and eco-anxiety. The impacts of climate change have significant effects on the health, nutrition, education, and future of children, adolescents, and youth. During this session, we talked about the importance of climate education for children and adolescents, as well as how it may help communities become more resilient to the effects of climate change.

Youth participants highlighted the relationship between climate change and the exercise of human rights by young people. It was also mentioned that the viewpoints and requirements of young people should be properly incorporated into the planning and execution of National Adaptation Plans (NAPs) and Nationally Determined Contributions (NDCs). The conversations revealed that young people are strongly in favour of establishing a financial mechanism focused on loss and damage, making further progress in a  ‘just transition’ to low-carbon economies, and also advocating for local adaptation and resilience solutions that are sensitive to the requirements of vulnerable communities. Education of a high standard and the creation of environmentally conscious employment were recurring themes in a number of the debates.

On the 11th of November, YOUNGO—the UNFCCC's official youth constituency—celebrated obtaining official recognition as stakeholders in developing and putting into effect climate policies. Hailey Campbell, co-lead of YOUNGO's ACE "working group," says, "We all applauded and sobbed at the conclusion, which produced this wonderful photo together." The recognition is granted in accordance with a murky Paris Agreement provision. Action for Climate Empowerment (ACE) is a term used to describe the activities of Article 12, which mandates that nations give people the tools they need to contribute to the fight against climate change. According to Ms Campbel, the young people in YOUNGO "worked aggressively" to have the action plan agreed upon in Sharm El Sheikh recognised and shaped during the following four years. The decision will materially change the status, i.e. the authority of young people’s voices in UNFCCC processes for the years to come.