Last year the Madurai Corporation built new-multi story flats for slum communities living on the banks of the dried-up Vaigai River.  The objective was to give a permanent home to families previously living precariously on the river bed in makeshift constructions of banana leaf plants and waste material. 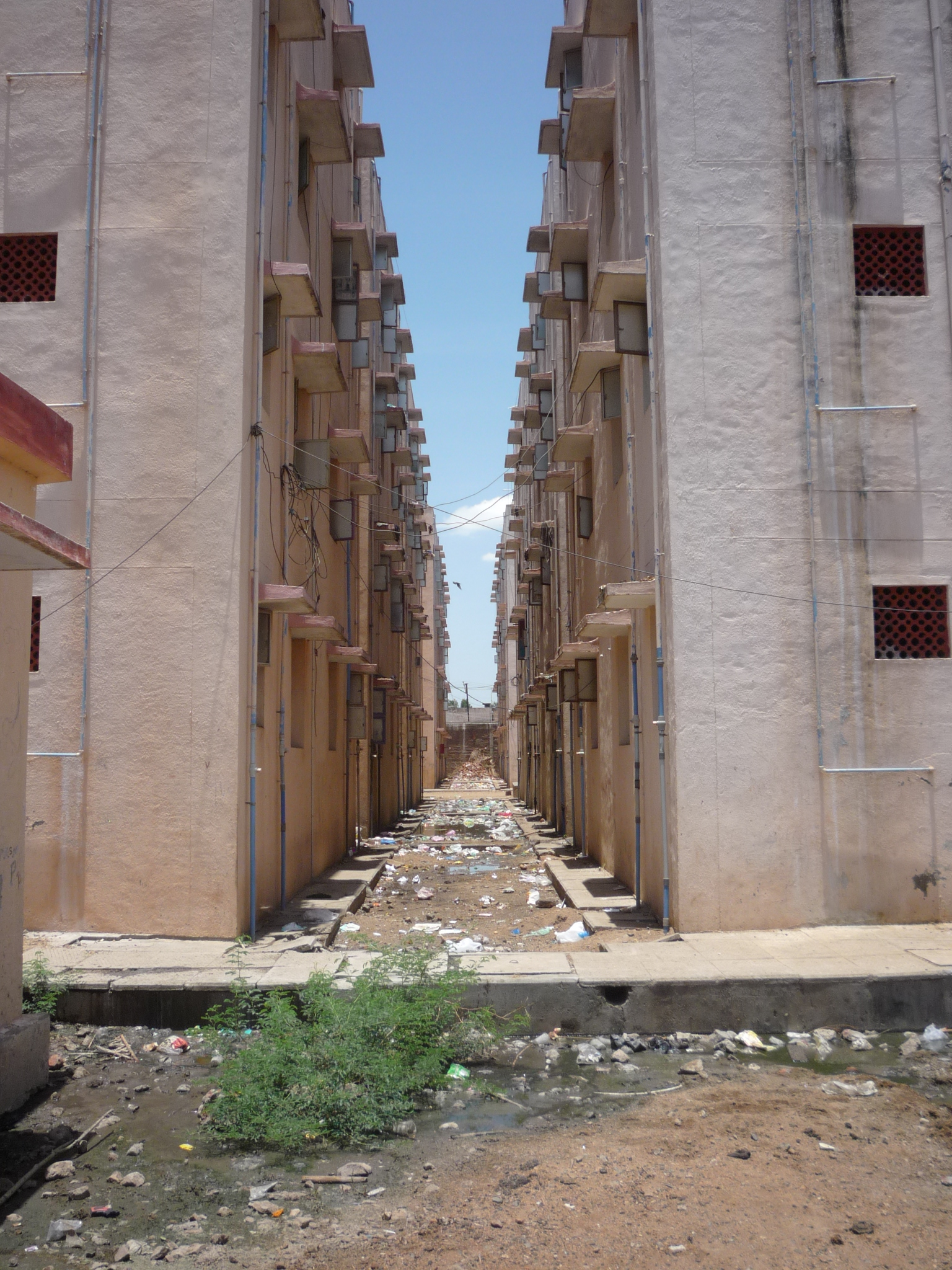 Today, these flats already look run down, surrounded by pools of open sewage and piles of litter. The government officials despair that the residents don’t take care of their new flats. The residents complain that the corporation is not providing the same services as they do for others, citing various political and other reasons. 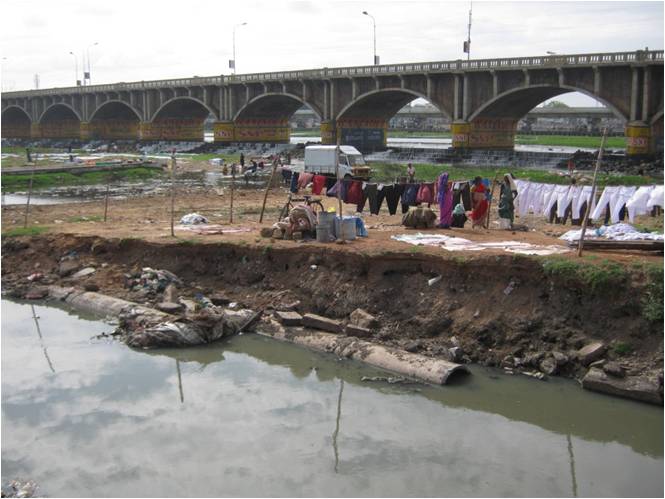 New families have now replaced these resettled families. They are building their ‘Kachha’ (temporary) homes just a few feet above the river bed and now they face the annual risk and reality of flooding caused mainly by storm water run-off. Currently over 30% of the more than 1 million city population lives in a slum. With an annual population growth rate per year of 1.7%, this cycle of resettlement and new slums taking their place is likely to continue. Five years ago the state Slum Clearance Board set itself an ambitious target of Madurai being slum-free by 2013. It looks like it will be impossible for them to achieve this.

The Government is hoping it has solved this long-term problem by building a large resettlement area in a peri-urban area outside of the city boundaries. However, they are having a hard time persuading the communities who are primarily casual labourers to give up their prime location, right in the city centre, and move to an area where there is no obvious source of livelihood. The Government agrees that it is best for resettlement areas to be near to the original slums. However, the price and availability of land in the city centre does not make this easy to achieve.

Walking around these areas and talking to the communities gives you a sense of the complexities of the problems facing the city: which are typical for cities across India and elsewhere.  These are development challenges with governance, political, and social- economic causes. But, climate change threatens to make this development challenge even more difficult to solve. 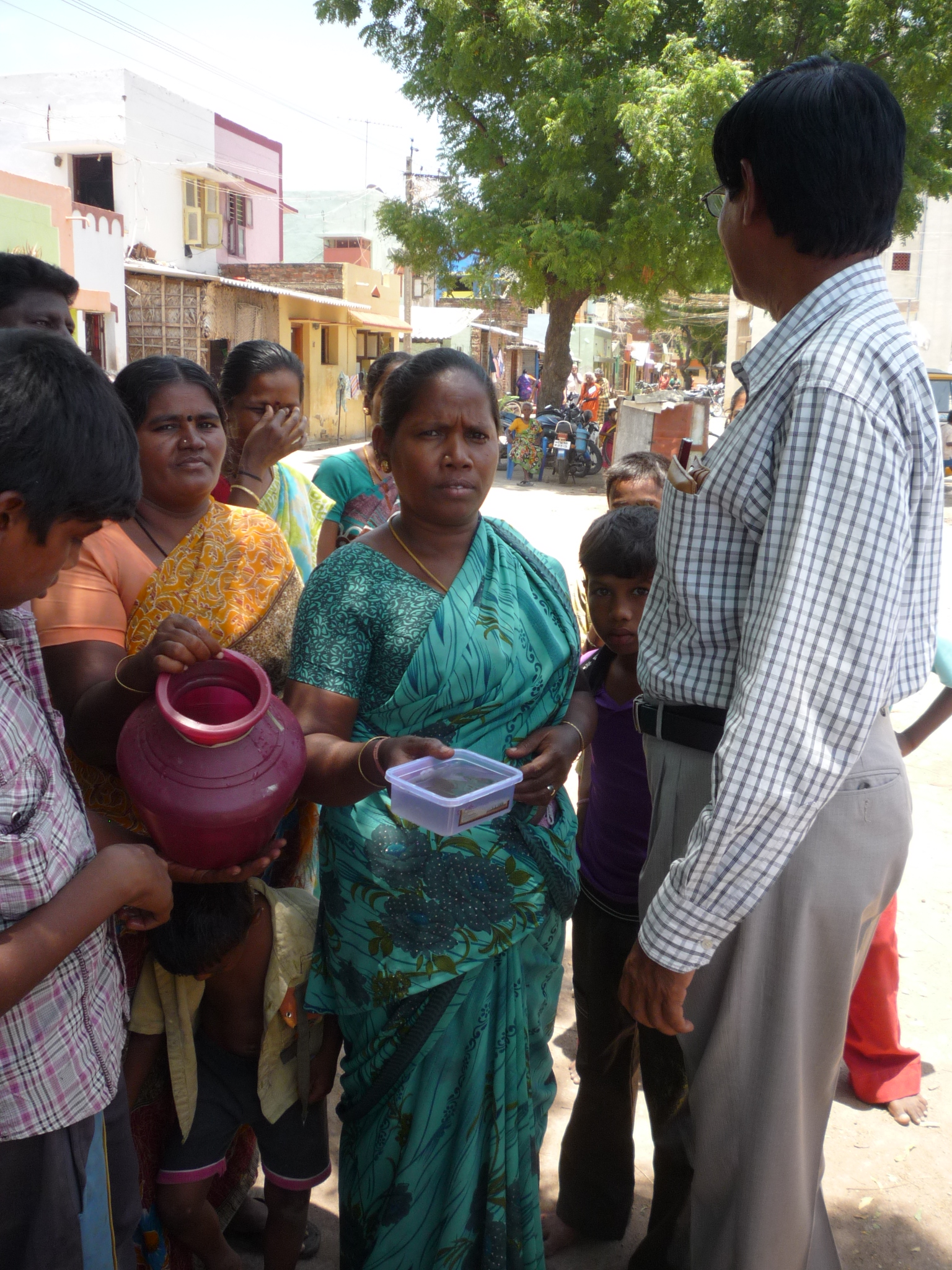 For example, these communities are already affected by water scarcity . Drinking water is delivered in trucks by the corporation every 2-3 days but the families claim it is not enough and often contaminated with dirty water. By 2030, scientists expect that the number of rainy days will decrease– further increasing water stress - but the intensity of the rain, when it does come, will increase, bringing the risk of worse flooding. Unchecked development is making this situation worse. For example, 20 years ago the city had 46 irrigation tanks but now there are only 30 due to encroachment of construction.

Is it possible that this complex set of interchangeable causes and effects can be managed by better planning and policy-making? The State Government of Tamil Nadu and Madurai Corporation is launching in partnership with CDKN a new approach which they hope will ‘future proof’ their city from the risks associated with climate change and resources scarcity in a way which reduces urban poverty. Their leadership in this regards could serve as a model for others.

A partnership among the city and state governments and an expert team of Atkins, Indian Institute for Human Settlements (IIHS) and UCL, supported by CDKN, will pilot this new ‘Future Proofing’ methodology  developed by Atkins. It starts by unravelling the different risks facing the city today and in the future using a participatory process that will feed into an urban risk diagnostic. The methodology explores the integrated nature of climate compatible development, including climate hazards, resource scarcities and damage to ecosystems.  This will be presented using maps and used as engagement tool for wider stakeholders. 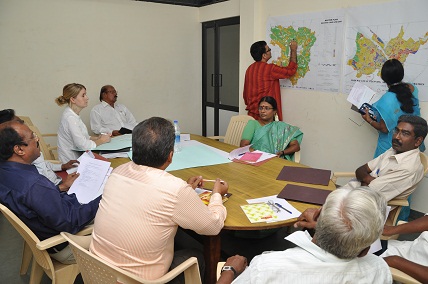 The Government and stakeholders will then decide which risks should be prioritisedand decide on a long-list of potential actions to address these risks. Through a series of consultations and utilising the expert coordinating group in the city these will be shortlisted and detailed project proposals prepared. The solutions which build the resilience of the most vulnerable, as well as provide multiple environmental benefits or ‘triple-wins’ will be favoured.  A crucial final step is to identify the sources of finance for these actions and how they can be mainstreamed within the regular planning and delivery processes of the Government.  Rather than putting forward an unrealistic action plan, the team will carefully consider the capacity and resource constraints of the city.

We are currently at step one, preparing the urban diagnostics, and collecting as much evidence and data on the types of risk facing the city. Last week the expert coordinating group of the city held a workshop with the team to do a first risk-mapping exercise of the city. It is easy to feel that given the scale of the risks and the institutional capacity challenges an 18-month planning exercise will never be able to change the lives of our target beneficiaries, the vulnerable slum communities. However, working within the system and trying to change the way plans are made ultimately has the most potential to make a long-term difference.

Watch this space as CDKN and the team reports from Madurai on progress with the initiative and the results we can see for the slum dwellers.