Urban development must be planned and climate-resilient: Experience from Rajshahi City, Bangladesh

Urban development must be planned and climate-resilient: Experience from Rajshahi City, Bangladesh

Abdulla–Al Kafy of URBAN LEDS II ICLEI-Local Governments for Sustainability, South Asia argues that development in cities needs to be better planned, more sustainable, inclusive, and climate-resilient to minimise the impacts on the urban climate and ecosystems.

From a small city with a population of only 40,000 in 1951, Rajshahi has currently grown into the fourth largest city in Bangladesh, with a population of 800,000. Most of this urbanisation is taking place in an unplanned way, leading to high risks for essential urban systems such as water supplies and biodiversity - as well as the human wellbeing that depends upon them.

Rapid, unplanned urban growth is also creating unemployment, an increase in the numbers of urban poor living in slums, and development of new settlements on marginal lands and in hazard-prone areas.

During these past two decades, the urban area increased by 15 percent. 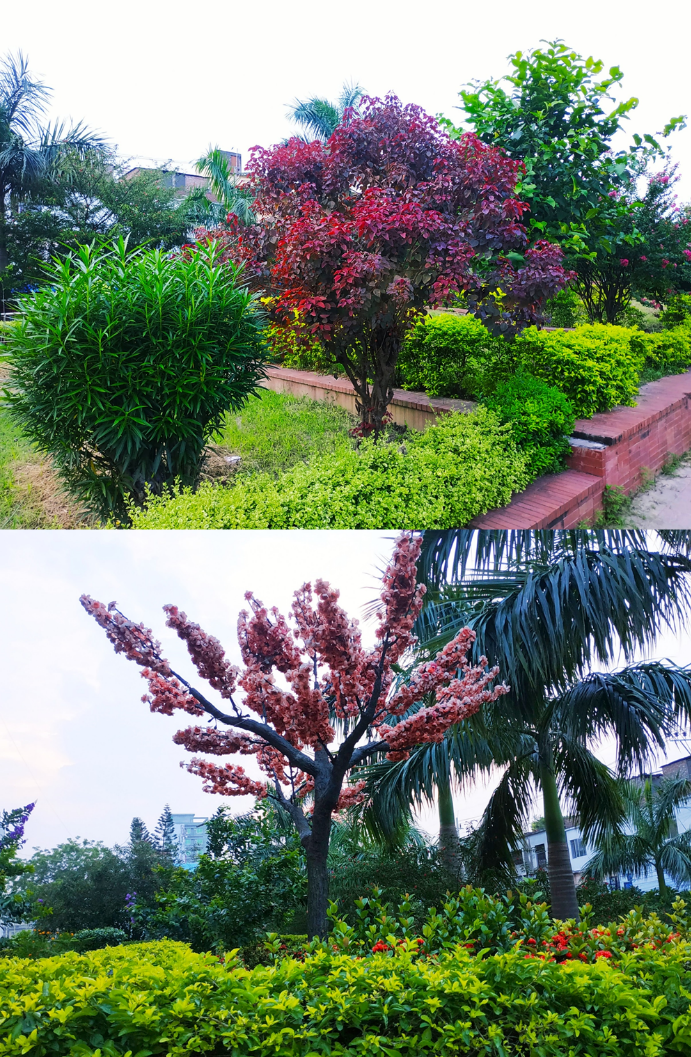 Consequently, 18 percent of the vegetation cover was lost from 1999 to 2019 (see Kafy et al, 2020, "Modelling future land use land cover changes and their impacts on land surface temperatures in Rajshahi, Bangladesh).

Under the Köppen climate classification, Rajshahi has a tropical wet and dry climate. The climate is generally marked by high temperatures, considerable humidity, and moderate rainfall. The hot season commences early in March and continues till the middle of July. The maximum mean temperature observed is about 32 - 36 °C during the months of April- July and the minimum temperature recorded in January is about 7-16 °C.

The highest rainfall is observed during the months of monsoon (July and September) with an annual rainfall of about 1,862 mm. In the last 20 years, the average temperature increased by 8°C in the city. Modeled simulations show if the current trend of urban growth continues, 70% and 88% of Rajshahi's area will experience temperature more than 38 °C in 2029 and 2039, respectively.

Absence of development strategies fit for people and environment

The absence of development strategies incorporating climate change adaptation and mitigation measures is a crucial driver of land cover change in Rajshahi City – and the subsequent rise in surface temperatures and climate change impacts.

If the increasing trends of unplanned development continue, they will affect human health, damage the environment (biodiversity and other elements of a thriving ecosystem) and increase the effects of greenhouse gas emissions.

To ensure sustainable development, an effective climate-resilient action plan is needed for Rajshahi City, which should emphasise the importance of natural resource conservation such as vegetation cover, green open spaces and clean, fresh water bodies.

As a vital step in this direction, ICLEI South Asia is helping Rajshahi City Corporation to prepare a Climate-Resilient Strategies and City Action Plan (CRCAP), which will increase the climate-adaptive and mitigating capacity of the city. The plan will provide effective guidelines for preserving and maintaining natural resources and lowering emissions through more sustainable urban development.

Currently, ICLEI South Asia is conducting a “Baseline assessment of floral wealth and developing open green spaces plan” for Rajshahi city. The project outputs will provide information on angiosperm diversity, a natural asset map, a GIS-based treemap, a pictorial handbook of the city’s trees, and will a plan for preservation of open green spaces in suitable locations in the city.

The plan will also provide recommendations to help the city to create new open spaces, based on scientific analysis. The plan will identify priority actions and outline how these will be implemented, by whom, by when, and with what resources.

In the Vulnerability Assessment, four fragile urban systems – water supply, biodiversity, health, and economy – have extreme risk scores. Meanwhile, solid waste management also demonstrates high risk for Rajshahi City (see table, below). The climate risks associated with the fragilities of these urban systems were calculated through a risk assessment exercise by a multi-stakeholder group as part of a Shared Learning Dialogue.

Risk statusWater supplyWith increasing temperature and decreasing/irregular rainfall in the region, water resources in the city will be under more significant stress, leading to health issues and impacts on the economy dependent on water (agriculture).

ExtremeHealthIn case of health risks due to sudden climatic impacts of increasing temperature and decreasing rainfall, the health system may fail in the city if there is a sudden increase in patients.

ExtremeEconomyIncreasing temperature and decreasing rainfall will impact agriculture productivity, fisheries, fruit cultivation, and thereby the economy of the city. It can also increase immigration to the city from surrounding rural areas, which accelerates unplanned urbanisation and decreases job availability.

ExtremeSolid waste managementIncreasing temperatures and decreasing rainfall may cause waste to decompose in open dumps creating health hazards; the choking of drains can lead to improper drainage and waterlogging in the rainy season. 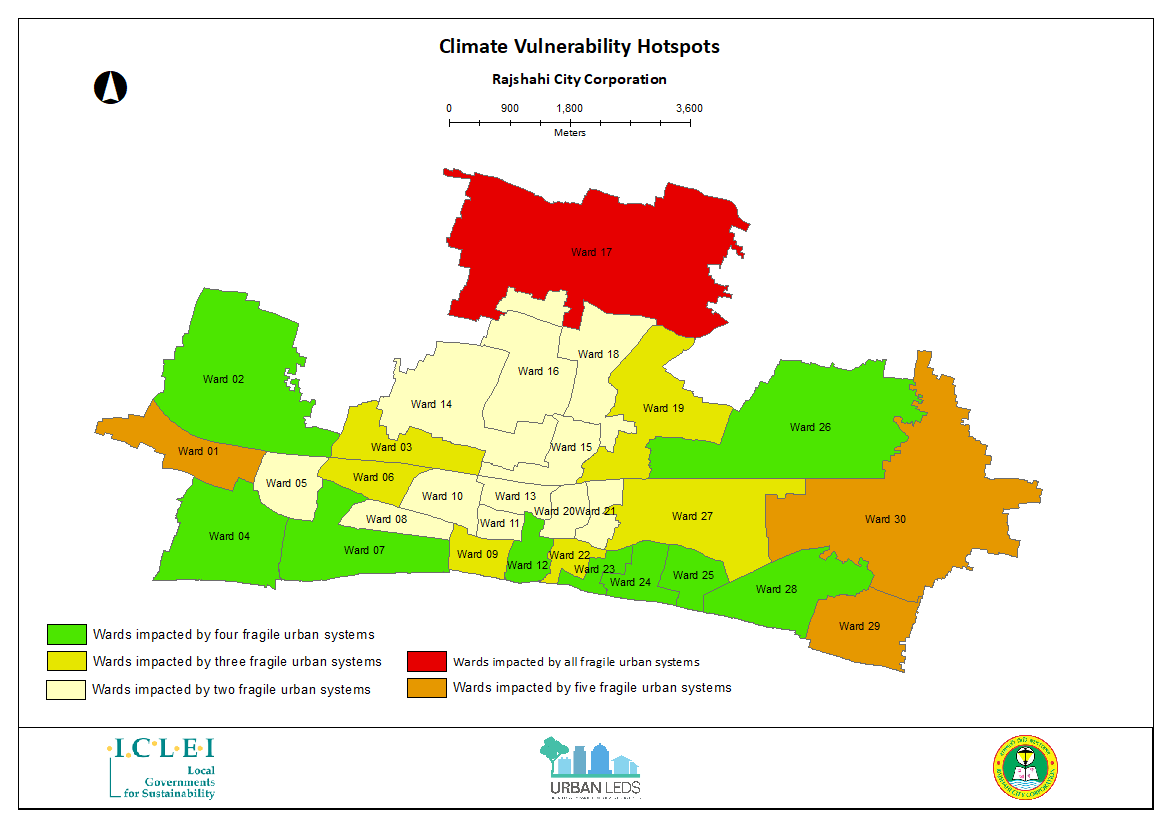 The ICLEI ACCCRN Process (IAP) toolkit was used in preparing the Vulnerability Assessment process and report. It revealed that Rajshahi city is especially vulnerable to two climate risk scenarios: irregular precipitation and increased temperature. These contribute to negative impacts on urban livelihoods and ecosystem services.

In summary, Rajshahi has benefitted from a robust exercise to quantify urban development by calculating the ‘land consumption ratio’ and identifying existing and potential natural resources. This includes a baseline assessment of floral wealth and a sustainable development plan for existing green open spaces – all of which can create strong foundations for climate resilience in the city. Updated land cover datasets, natural resource conservation, and greenhouse emission mitigating strategies are all still urgently needed. It is hoped that these first steps toward sustainability are just the first of many to come. Ultimately, these follow-up processes could make Rajshahi city far more climate-resilient.