In Satkhira, Bangladesh, local grassroots organisations are raising awareness and extending essential services to communities to tackle the compounding effects of Covid-19 and cyclone Amphan. Sohanur Rahman reports. This is the sixteenth in the series of stories from Voices from the Frontline initiative by ICCCAD and CDKN.

Satkhira is a coastal district in the southwest of Bangladesh. The area is tremendously vulnerable to the impacts of climate change. In 2009, cyclone Aila wreaked havoc in the district, causing  numerous casualties and destroying croplands. Saltwater ingress has created long-term consequences for the area. Since then, Satkhira has been frequently affected by medium to high intensity cyclones within close intervals.

Most of the inhabitants of Satkhira are engaged in fish-farming and agriculture, thanks to their close proximity to rivers and to the world’s largest mangrove forest, the Sundarbans. An increasing number of people have also started migrating to nearby cities, either as day-labourers or as brick-makers on a seasonal basis. This is particularly the case in the dry season, when agriculture and fish farming become difficult due to increased levels of salinity. Women are also migrating to big cities to work in the garment factories.

A female-led, local organisation in Satkhira, called Bindu, has been working on community outreach programmes for almost a decade now. The organisation advocates for gender equity, women’s empowerment and right to education, and climate justice. Founded in 2011, Bindu’s work is primarily focused around the southwestern coastal region of Bangladesh. 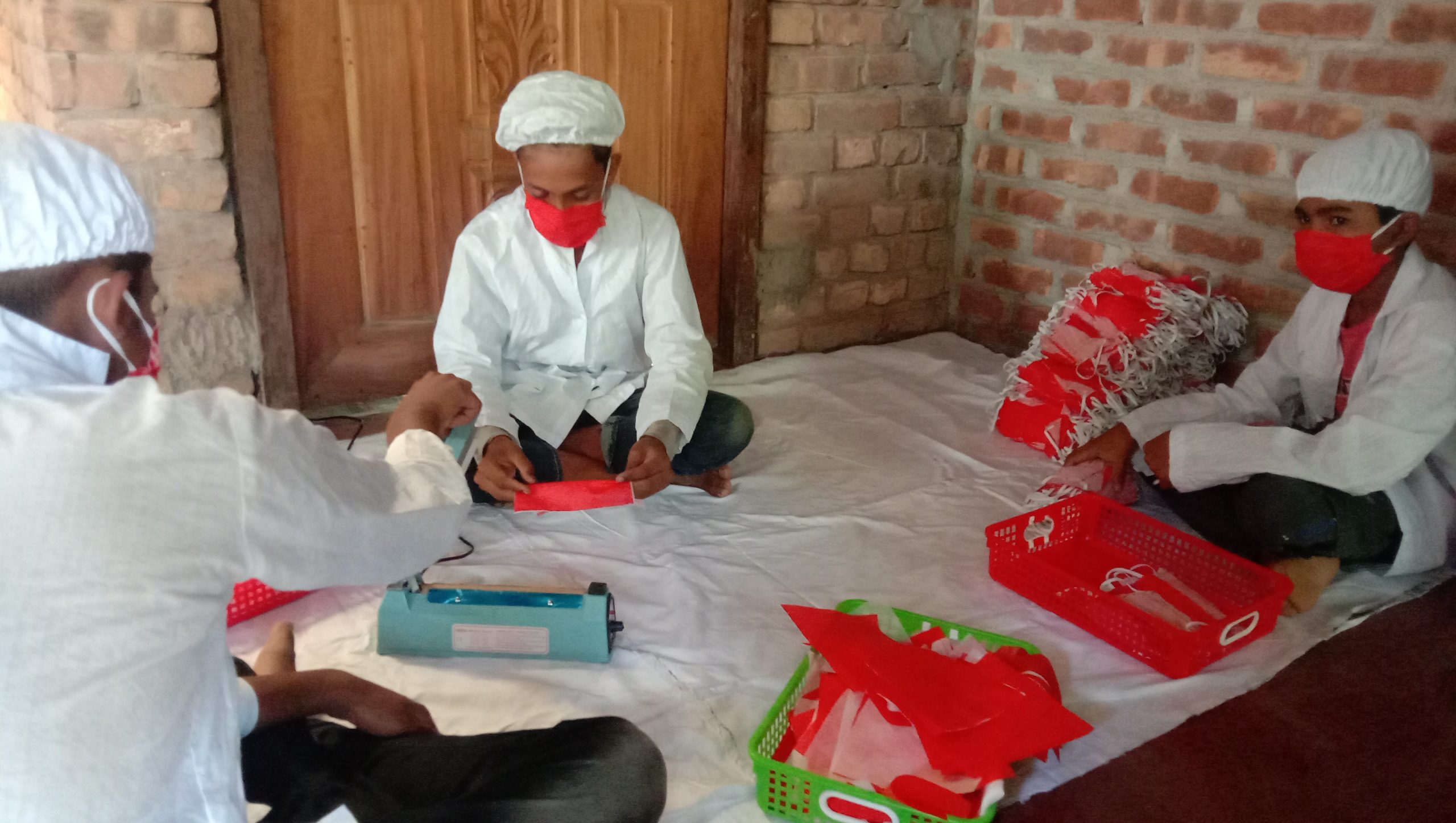 Jannatul Mawa, a 28 year-old young girl from Kaliganj upazila in Satkhira, is the executive director of Bindu. When Covid-19 hit, the organisation undertook multiple initiatives to tackle the repercussions of the ongoing crisis on the communities.

With an initial focus on reducing gender-based discrimination and child marriage, Jannatul and her organisation eventually started offering different skills-based trainings to local women. “We recognise that women are disproportionately affected by natural disasters and climate change, due to various socio-cultural and economic factors. Therefore, we aim to empower women socially and economically to secure their rights,” Jannatul narrates.

On March 8, 2020, when the first Covid-19 case was officially confirmed in Bangladesh, villagers were indifferent about the severity of the situation. However, the imposition of the lockdown affected the communities negatively as it had an immediate impact on their livelihoods. “Fishermen and farmers couldn’t sell their produce due to the closure of markets and daily wage earners were compelled to leave their jobs. This led to severe food insecurity within the community,” Jannatul adds.

Migrants began returning to their villages from big cities after losing their jobs, with the hope that they would be able to make ends meet in their villages. “When the migrants returned to their villages, they were stigmatised. They were considered potential sources of the virus. Social exclusion, loss of livelihoods and poverty gave rise to domestic violence and forced child marriages in the community,” she highlights.

In addition, the closure of educational institutions due to the lockdowns and the safety protocols in place for Covid-19 prevention are negatively affecting children’s education. Although a few local schools are providing online classes, most students are unable to attend due to lack of proper equipment and internet facilities.

Given the multiple effects of the crisis on the communities of Satkhira, Jannatul sensitised community members about the safety and prevention protocols of Covid-19. She withdrew funds from Bindu’s reserve, to mobilise and form a women-led emergency response team to produce and distribute face masks, hand sanitisers and soaps.

”All staff members of Bindu contributed to an emergency fund, by forgoing their salary for one month. Community members also came forward to contribute to the effort. In addition, a local NGO provided their support to our initiative,” shared Jannatul.

Jannatul and her team conducted courtyard meetings in the communities to demonstrate proper ways of wearing masks and washing hands, as per the guidelines of the World Health Organization (WHO) and the Ministry of Health in Bangladesh. In addition, they distributed leaflets, posters and implemented awareness campaigns in local language about the nature of the virus. “All our previous experiences in community outreach worked as a resource during Covid-19,” she adds.

To cater to a wide range of audience, Jannatul also collaborated with a local radio station known as Nalta, to disseminate information and important guidelines. She has facilitated the formation of a local network called the “Corona Expert Team” consisting of local men, women, youth, social workers and community journalists. The network works to foster relationships between the community and local government. Together with the local government, the network has hosted training workshops for local youth volunteers on emergency response measures during Covid-19. 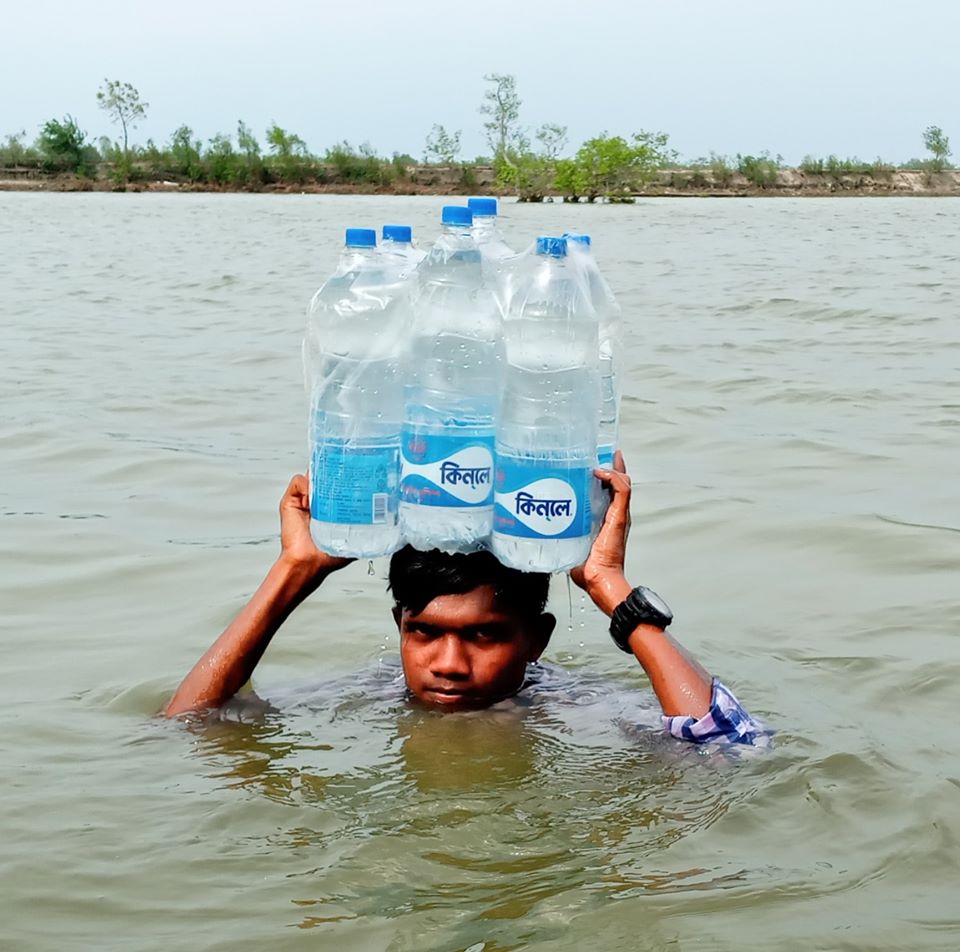 While COVID-19 was still prevailing, Bangladesh was hit by cyclone Amphan, the deadliest storm ever recorded in the Bay of Bengal. During the cyclone, heavy rains and high tidal surges destroyed dams and submerged low-lying lands, ponds and croplands with intrusion of saline water in Satkhira.

Given the gravity of the situation, Jannatul and her team provided food relief packages to the most vulnerable communities free of cost. They also developed a local sharing and caring model called “The Wall of Humanity”, where community members leave their surpluses for those in need.

To ensure the safety of the cyclone-affected communities, Jannatul offered essential materials such as masks, hand sanitisers and disinfectants for free. “People are struggling to manage food for themselves, how will they buy masks and soaps? This is the time when we should support each other” she adds.

“It must also be mentioned that menstruation does not stop during a crisis. We encouraged and promoted the use of sanitary napkins to ensure menstrual hygiene among vulnerable girls. Our volunteers distributed sanitary napkins among young girls and women at a very low price and at times, free of cost” she denotes.

When the situation improved, Jannatul provided seeds and organic fertilisers to women farmers to begin their harvests. She was able to fund this initiative from one of her ongoing projects that promotes women-friendly agricultural practices.

A common theme emerging from the stories of community resilience from different countries is that of women-led organisations that are working tirelessly in the frontlines during crises. Women’s inherent management skills and ability to work with an issue from multiple angles, have been instrumental to the prevention and management efforts of the global pandemic. Despite being vulnerable to various forms of discrimination, they continue to fight the status quo and change a system that excludes women from decision-making processes.

To reiterate, recognition, support and mobilisation of funds need to be driven towards women-led organisations, as potential long-term solutions to disaster management. The collective power of women often plays a significant role in taking community-based initiatives.

Sohanur Rahman is the coordinator of YouthNet for Climate Justice, the largest youth network working with coastal communities to support them during humanitarian crises. He advocates globally on youth-based rights, especially in the areas of climate change, disaster risk reduction and global Agenda 2030.

Jannatul Mawa is a 28 year-old young woman, living in Kaliganj upazila of Satkhira, Bangladesh. She is the executive director of Bindu, a local women development organisation extending emergency response services to coastal vulnerable communities, particularly women and young girls. Bindu is a member of YouthNet for Climate Justice.

This article is part of a series. CDKN and the International Centre for Climate Change and Development (ICCCAD) in Dhaka, Bangladesh are reaching out through networks of civil society organisations and local groups to commission interviews with community pioneers at the frontlines of devising localised solutions to COVID-19. Many of these communities are already trying to cope with the effects of climate change, and other threats to their wellbeing.

Read more stories from communities: Voices from the Frontline series.