In Aftabnagar, a rapidly developing residential area in Dhaka, Bangladesh, one woman started a food distribution initiative during the COVID-19 pandemic, which quickly transformed into a full-fledged community project working towards self sufficiency, food security and solidarity. Maheen Khan reports. This is the sixth story in the series “Voices from the Frontline” by ICCCAD and CDKN.

Sheuly Ishrat lives in Aftabnagar, Dhaka. Near her home is an informal settlement mainly inhabited by daily wage workers - 100 families, each comprising multiple family members, with a total of 320 residents. Here, the COVID-19 crisis has led to massive job losses and food insecurity. “Many of the women living in the settlement are domestic helpers and have lost their jobs because outsiders are restricted from entering private houses for fear of contagion,” says Sheuly.

Having been involved with voluntary organisations providing support and services to the less privileged in her student days, Sheuly decided to draw on her experience and come to the help of her neighbours in need. Initially, she reached out to her network of family and friends, creating awareness of the predicament of the informal settlers in Aftabnagar. Remarkably, support was provided immediately as the news spread, in the form of food baskets and financial donations. Watch Sheuly explain, below.

As Sheuly became more and more involved with the initiative, she went beyond immediate measures and began considering sustained well-being for the informal settlers. She arranged for a medical team to come and carry out health checks in the community. And she gathered all the residents in a nearby open space to educate them on the virus and the various safety measures such as social distance maintenance and rigorous hand washing.

The awareness meetings quickly turned into daily meetings between the residents and Sheuly, where different activities of the day and other related agenda items were discussed. During one such meeting, Sheuly brought up the idea of a community kitchen, saying “We are one family, and if we cook from a common kitchen for all of us, we will not only save costs but also contribute to each other’s well-being.”

And thus began the next phase of the initiative. Soon a brick and mortar community kitchen was set up in an empty space near where Sheuly lives to accommodate cooking for 320 people. One of the residents of the settlement, Aziz, volunteered to cook for everyone, along with other members who came forward to help as kitchen hands and assisted in preparing the food. Most days they would eat rice, lentils and potatoes but on special occasions like Eid, chicken biryani and rice pudding were served during lunch and mutton biryani was served for dinner. Once the food was cooked, it was taken home by the residents and eaten with families. 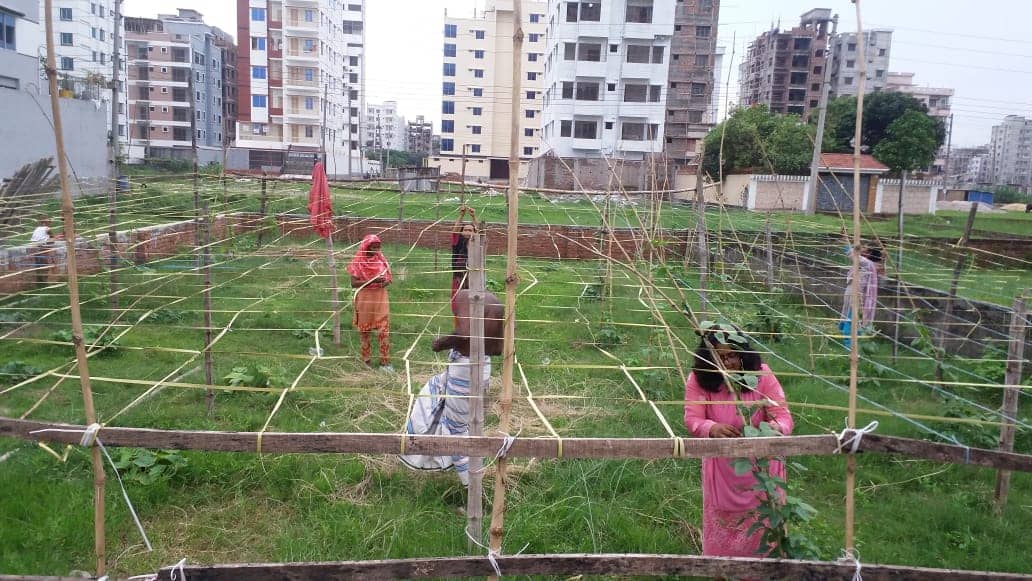 While exploring sustainable options, Sheuly was struck by another idea. In Aftabnagar, a lot of land was lying empty, yet to be developed. “I thought to myself, why not cultivate these lands to initiate small-scale farming? This will not only help to achieve a level of food security but also teach this community about the benefits of growing your own food, especially in times of crisis!” says Sheuly.

She adds, “To sustain the initiative, funding was a hurdle. I also realised that these people had no jobs for now, hence by involving them directly, they could work again and contribute not only to their own welfare but that of others. The true spirit of community belonging would spark and they would understand the benefits of unity at times like these. Charity is not sustainable, but this would be.”

Sheuly approached the respective landowners who encouraged her regarding her novel idea and even connected her to other landowners in the area. Some were reluctant, but she assured them that the land will only be used during the COVID-19 induced disruptions facing the economy. A total of seven empty spaces totalling a few acres and separated by boundaries were used for vegetable farming. Throughout the implementation of the various initiatives, social distancing protocols were ensured and access to hand washing were made available in each space.

The women and men were mobilised to farm vegetables like okra, eggplant, pumpkin, spinach and more in these lands soon after Sheuly set up the makeshift farm. “Sheuly (Apa) has helped us when we had no one. We will do whatever she wants us to do, as it is for our own good,” says Jahanara Khatun, a resident of the informal settlement who used to sell stuff that she scavenged off the streets to earn a living before the lockdown came into effect.

Donations from Sheuly’s friends and family continued to pour in and helped to buy the utilities required to operate the community kitchen such as cooking utensils and other food items like rice, lentils, cooking oil and spices. However, there were days when enough donations had not come through and the kitchen was closed. “Growing vegetables is not enough, as you need other items to cook the food, and that requires additional funding. There were many people who still helped but there were bad days,” Sheuly adds.

When asked about the obstacles that she faced while working on her initiative, Sheuly shares determinedly, “Many people told me to stop. They were concerned whether I would be able to continue or not. I assured them that I started the initiative without much planning, and since it is working, then let me continue. Let’s see how far I can take this.”

Despite limited resources, Sheuly has also managed to build a makeshift classroom. Almost every day, around fifty children sit around Sheuly while she reads them stories from Aesop’s Fables and by Rabindranath Tagore. She also teaches them basic etiquette, and from time to time they all sing and dance together. “If I miss one day sitting with the children, they come running to me with inquisitive eyes, and ask me ‘Will you not teach us today?’” Sheuly shares.

Looking to the future after COVID-19

Undoubtedly, there are multi-dimensional effects of the COVID-19 impacts, and Sheuly is worried about the future repercussions. She says, “There have to be sustainable livelihood options for these 100 families. Lack of education, poverty, food insecurity and psychological issues of uncertainty will all lead to major crises amongst such communities. One cannot imagine the consequences once this storm has passed.”

Sheuly is currently devising a plan to enable women and men living in the settlement to develop livelihoods based on their skills. In a recent meeting, Sheuly pitched the idea to the women to start working using the skills that they have. At the time of writing, Sheuly was seeking support to get the wheels turning on investing in these women.

A common lesson for the informal settlers of Aftabnagar, as a result of Sheuly’s initiative, has been the recognition of the value of working together as a community. As Aziz, who cooks every day in the community kitchen says, “If the pandemic had not occurred, we would not have learned that in order to survive during times of crisis, humans have to fight together as a team. It is an important lesson for future crises.”

It goes without saying that the current global crisis has laid bare many underlying issues that were prevalent in society, but it has also shone a bright light on everyday heroes working on the frontline. Sheuly Ishrat’s story is one of indomitable human spirit and determination in times of adversity. When faced with an opportunity of helping others, she did not once hesitate to move forward. Her anguish at the precarious state of those living in her neighborhood propelled her to take action. The initiative began in March and through my regular correspondence with Sheuly, I hear it continues with full force and is evolving towards a more concrete community project. Once again we are reminded that trying times often ignite the most inspiring tales of solidarity, and how important it is to draw lessons from them.

Sheuly Ishrat is a writer, a filmmaker and a social worker based in Dhaka, Bangladesh. She wears multiple hats and has also worked as a freelance journalist and a contributing reporter on print media. She also dabbles in event planning and photography.

About the Interviewer Maheen Khan works as a Consultant for ICCCAD, and is coordinating the Voices from the Frontline initiative.

Read more of the ‘Stories from the frontline of COVID-19’ with ICCCAD and CDKN: