That’s why CDKN and the Eastern African Grain Council have joined forces to enhance the use of climate-smart information in the grain sector. As part of this project, the two parties co-hosted a session at the 8th African Grain Trade Summit, in Mombasa, Kenya in early October 2019. Here, Revocatus Twinomuhangi, Guy Rudolph and Edna Odhiambo share key messages from conference session.

The grain sector, and its entire value chain, play an important role in enhancing food security, household incomes and job creation in East Africa. This is especially important given the rapidly increasing Sub-Saharan population. However, the climate vulnerability of the sector is clear to see. This year, for example, Kenya’s late rains led to a 45% reduction in the planted area of long rains maize -- according to an assessment by the Climate Prediction and Application Center (ICPAC).

Given the surge in demand for grain in East Africa, grain imports to the region could increase threefold by 2050 if local production is not significantly improved, according to Bhavni Bunge, an expert on international grain trade trends.

Climate change poses a major challenge to increasing regional supply to meet demand. Not only does climate change affect the yields of various crops, but it can increase post-harvest losses; for example, when increased rainfall and damp lead to the growth of aflatoxins in stored grain (aflatoxins are poisonous carcinogens that are produced by certain moulds).

EAGC, in partnership with CDKN, has produced an infographic which shows some of the risks and opportunities for each stakeholder group along the value chain. See image below. 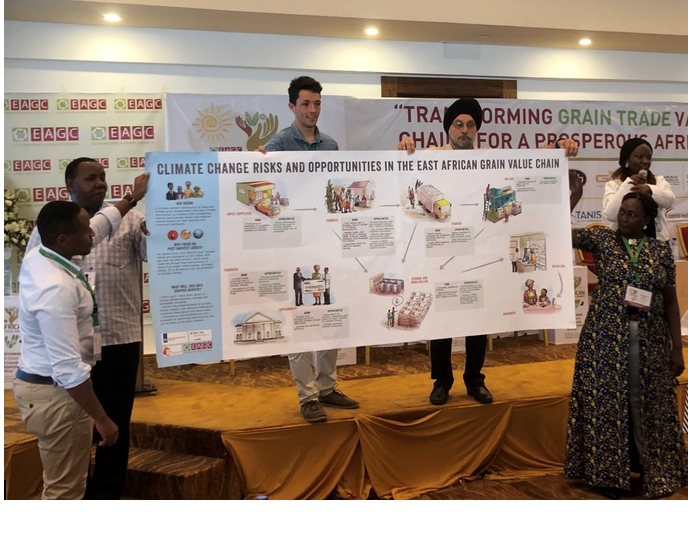 The session convened stakeholders along the value chain, from government, producers, business, research, donors and research organisations, to discuss climate risks and opportunities in East Africa’s grain sector. They responded to and built on the mapping exercise that was summarised in the infographic.

Climate risks lie at all stages in the value chain

The mapping and discussions revealed that significant climate risks exist at all stages of the grain value chain. Droughts, extreme heat, unreliable and intense rainfall and flooding reduce the yield and quality of grains. This can have disastrous effects on grain farmers as many of them take loans in order to finance their activities for the season, and one bad harvest can bankrupt some of these farmers. Joyce Kabura from Vision Fund International, a financial empowerment organisation, highlighted the need for improved data that could allow insurance providers to accurately quantify risks in the sector. Currently, crop insurance is very expensive due to unreliable or insufficient data which has resulted in low uptake amongst farmers.

Farmers are at greatest risk

Actors at the primary stage of the value chain (farmers’ side) reported a greater impact of climate change than those involved on the higher end (processing, distribution and retail). This could be explained by the fact that grain farmers are more dependent on nature and their adaptive capacity is low, while distributors and millers have more control over external factors. However, risks experienced by farmers have a ripple down affect throughout the value chain.

The manifestation of pests such as the Fall army worm, and increasing prevalence of aflatoxins in grains post-harvest are linked to increasing climatic variability. The millers and other grain processors were particularly concerned with low quality grain and aflatoxins. For millers, low quality grain means loss of business and increased costs. One miller said: ‘there is not enough good grain to be milled, and increased supply of bad grains means that additional tests have to be made to remove the bad grains, which increases costs’.

Actors could benefit from improved weather information and knowledge exchange

A crucial element of the session was identifying the information needs of the various actors. Beatrice Gakuba from AWAN Africa emphasised the role of high quality weather and climate information services. She noted that ‘index-based early warning systems’ had reduced uncertainty for producers in East Africa’s dairy industry and a similar approach could be applied to the grain sector.

Specifically, she suggested that arable (grain) farmers could access seasonal forecasts for their region, which could guide them to plant different crop varieties based on the forecasts. This would reduce losses for farmers, and financial institutions would be able to provide crop insurance at reduced prices.

There are many opportunities for improved policy and coordination

A range of other policy and management approaches to increase the grain sector’s climate resilience was discussed. Options include:

This session was a rare opportunity to engage with the private sector around the impacts of climate change. For many of these stakeholders, this was the first time that they had viewed some of their business risks through a climate lens. Further, despite the greater number of men present, it was encouraging to note the equal contribution by women, especially with regards to some of the more innovative solutions identified.

The project will establish communication channels that fulfil some of the information needs identified by participants, as well as building the capacity of stakeholders to deal with some of the climate change challenges ahead.