Joseph Daron of the University of Cape Town looks at ways in which local decision-makers might be able to deliver more effective climate services.

Over the past few years many climate research centres, government institutions and consultancies across the world have been part of a rebranding exercise. In essence there is nothing new in the establishment of climate services. The provision of expertise, data and guidance, as well as work on informing climate risk management, has grown steadily as the issue of climate change has become better recognised across sectors of society. Yet, with increased interest in this area, and with the acknowledgement of the global community for the need to support climate change adaptation efforts, the age of “climate services” has arrived.

Workshop participants and facilitators on a visit to Dansoman in Accra on the final day of the workshop.[/caption]

“Scientifically based information and products that enhance users’ knowledge and understanding about the impacts of climate on their decisions and actions" (American Meteorological Society).

The available definitions of climate services listed above have an emphasis on the delivery and packaging of information. There is an implied authority embedded in these definitions that positions scientists and climate information providers as the bearers of knowledge, able to inform whatever application or decision is being made. In many cases this version of climate services is appropriate and can be very helpful. However, from my experience, and in learning from experiences of others, the world of adaptation decision making is rather messy! Simply translating climate information into decision-relevant information and products, and then delivering it directly to users through a DHL-style courier service seems too neat to reflect the real nature of how decisions about complex problems are made. In Africa, where development and adaptation to climate change often go hand-in-hand, conceiving climate services as a one-way flow of information (even if tailored) appears to be a limited model for how climate services should be framed. This opinion emerges from a number of experiences working with users of climate information, and in particular, a recent workshop held in Accra.

Future Climate for Africa (FCFA) is a new five-year international research programme jointly funded by the UK's Department for International Development (DFID) and the Natural Environment Research Council (NERC). As part of the scoping phase, FCFA has sponsored four pilot case studies across Africa to explore different approaches to integrating climate information into adaptation decision-making processes. The Climate Systems Analysis Group (CSAG) along with the Stockholm Environmental Institute (SEI)-Oxford and START, facilitated one of the four pilot workshops in Accra in June this year. The workshop brought together scientists and decision makers from two coastal cities facing considerable climate change challenges, Accra and Maputo.

As one of the facilitators, I was lucky enough to be involved in this fascinating workshop. We adopted an unconventional approach: rather than being climate data-led, as is implied in the definitions of climate services listed above, we trialed a “co-exploration” approach where facilitators and participants collaboratively explore the vulnerability of a specific place to various climate and non-climate stresses. This co-exploration approach of place-based vulnerabilities was previously tested at a proof-of-concept workshop in Dar Es Salaam in 2013. 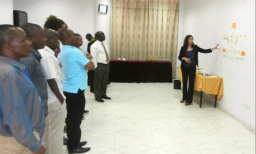 Although the context of the workshop was climate change adaptation, the agenda didn't introduce climate projections until well into the second day of the workshop. Prior to this, the focus was on establishing non-climate vulnerabilities in real-world settings, as chosen by the participants from the two cities. The group from Maputo chose to examine the emerging area of the Costa do Sol, and the group from Accra focused on the area of Dansoman; each contain formal and informal settlements and are in low-lying coastal areas vulnerable to flooding and coastal inundation. The non-climatic and developmental challenges facing these communities are profound. A data-led approach to exploring climate change adaptation would have begun with a narrow framing of increased flooding and sea level rise, immediately focusing attention on these aspects of the problem. However, allowing the participants to contextualise the vulnerabilities using their place-based knowledge resulted in the highlighting of issues such as weak law enforcement for building codes, inefficient or non-existent waste disposal, pressures facing land from lateral development, and, in the case of Dansoman, tensions between the local communities and the nearby salt production company. It became immediately apparent that only by acknowledging these issues upfront can suitable climate change adaptation strategies and interventions be identified.

On the final day of the workshop we visited Dansoman to see how the issues we discussed are affecting the communities (see feature image). There are clearly fundamental development challenges that need to be addressed in considering adaptation to current climate variability and future climate change in such an area. Using a bottom-up vulnerability first approach, and co-exploring the adaptation needs of the communities in an interdisciplinary setting, seems to offer a constructive way forward that could facilitate a decision making paradigm that improves the livelihoods of such communities.

Based on my experience in Accra and other similar activities, I would argue that the type of climate services needed depends on the stage at which the climate service provider is engaging with the decision makers. If the interaction occurs early on in a decision process, for example in the scoping phase of a project, then it is especially important to explore the complexities of the decision problem and understand what combinations of factors are really driving vulnerabilities. The co-exploration approach seems particularly promising in this context. However, if the interaction is much later in the process, when the problem has already been scoped and possible interventions identified, then a co-exploration approach would be less relevant; the climate information needs are likely to be better served through the conventional approach to climate services. Ideally, climate service providers will be involved at more than one stage of the project, meaning that a suite of different approaches becomes more valuable.

In addition, the workshop in Accra demonstrates that climate services are only consequential when they feed into a real decision-making process. Though we were looking at real case studies, no decisions were actually being made. The workshop was therefore removed from the processes by which adaptation options in Maputo and Accra are actually decided upon. Decisions only get made when there are budgets to allocate, specific objectives to be met, and finance and political will is on the table. It is in such contexts that a more detailed examination of available climate information and its implications for the adaptation options becomes truly consequential. In such a real-world multidisciplinary setting, the co-exploration approach can add value in helping to investigate options and strategies. However, this cannot be done through isolated workshops, but only through sustained engagements that establish relationships of trust with decision makers.

So it seems apparent, and I am not the first to say this, that we need to have a broader range of framings, approaches and methods within the domain of climate services for scientists and information providers to succeed in contributing towards more informed decision making. We need to question the current definitions and approaches that assume scientists have all the answers and it is just an issue of packaging.  Secondly, we need sustained engagement (something not possible in our pilot study) to develop the co-exploration approach further in the context of real, complex decision-making. There is much more to be done!

CDKN is supporting the piloting of the co-exploration approach as part of the scoping phase of the Future Climate for Africa Programme.