Why train journalists on climate change?

Why train journalists on climate change?

CDKN Africa’s Claire Mathieson argues that the media has an ethical obligation to report on climate change wherever possible – even in ‘unrelated’ stories.

Climate scientists speak science – a jargon-filled, technical language that those untrained simply don’t grasp. But unlike the language – which the person on the street doesn’t necessarily need to understand – the information is of the utmost importance for us all.

But whose duty is it to disseminate the information? Should it be the exclusive responsibility of the science world? As we all share the earth’s climate, the battle with climate change should also be a battle shared by everyone. As such, we each have a role to play. And for journalists it should be an ethical obligation to ensure climate change features regularly in the media – both directly and indirectly. 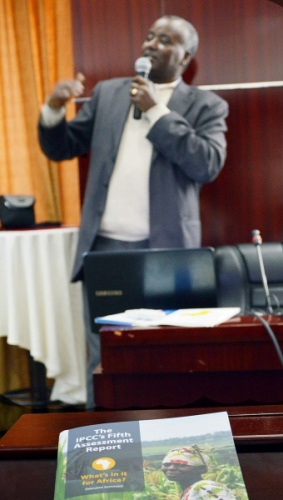 Journalists are trained in climate change using CDKN's executive summary of the Fifth Assessment Report 'What's in it for Africa?'[/caption]

It was this message that came across clearly during an outreach event on the IPCC’s Fifth Assessment Report in Midrand, South Africa, where a group of journalists from around the SADC region were invited to participate in a training session with IPCC authors and the South African Department of Environmental Affairs.

Most of the journalists at the training cover environmental issues on a weekly basis, and all have covered climate-related stories. “These stories are everywhere; it’s easy to see the impact climate change is having on our population,” said one journalist from Tanzania. But while the stories of change, challenge and difficulty are common, finding positive stories and understanding how the world’s governments are responding, is not as easily accessible. Information on action – and not just planning – is what the journalists and their audiences are hungry for.

“Poor African countries have contributed the least to climate change, but face the full brunt. Do we have enough African representation [during climate negotiations] and are developed countries taking responsibility?” asked another Zimbabwean journalist.

The evidence base on climate change is clear for each of the reporters, but the stories of forward momentum involving mitigation, policy implementation and adaptation are harder to find – and people to talk to even more elusive.

So while it is the journalists’ duty to communicate pressing issues to the average person, they do need access to the science – and need it explained to pass the message on appropriately.

It was this symbiotic relationship the training tried to make clear. By bringing together IPCC authors, the IPCC head of communications and media relations, Jonathan Lynn, as well as local government representatives, it was hoped that conversation, stories and further reporting would be facilitated. 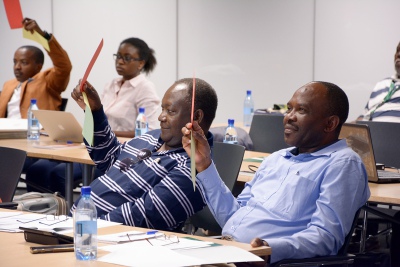 There are two tales the journalists can tell around climate change – both equally important.

The first is a tale of current climate events. From the release of the IPCC Synthesis Report to never-before-seen extreme weather events to stories of 35,000 walruses ending up on a beach in northwest Alaska because of the loss of sea ice; stories that speak directly to climate change are all news- and feature-worthy.

But indirect articles work equally well in keeping the issue in the public consciousness. It is here that environmental and climate journalists are able to input valuable information into ‘unrelated’ articles, and encourage other journalists to do the same.

A piece on the booming coffee culture in South Africa would include interviews with barristers, reviews of coffee shops, and the various beans and processes used to achieve the favoured blend. But in our ethical obligation as journalists, the piece should also include information about the Ethiopian coffee industry and how a single degree change in temperature will change the flavour of the coffee produced from that country.

A tourism piece on Mt Kilimanjaro should always include information on the melting ice, and a piece on Zimbabwe’s Victoria Falls should also highlight the concern over the future of the water flow.

One of the speakers at the event said climate change is no longer a “sectoral issue” but is “cross cutting”. Our media coverage of climate change needs to be just that – cutting through the environmental pages and appearing in tourism, entertainment, sport and current affairs. Editors also need to be involved in this effort.

Climate compatible development is a great story to tell – one filled with hope and courage. These stories might be well known to funders and climate-orientated organisations working on the ground, but to the average person the world is getting warmer, the weather more extreme, and life harder – with no end in sight. Journalists need to be sensitive not to simply report on “doom and gloom”. Sure, it’s worrying and we should not shy away from the truth, but there are other opportunities.

A second option is to write stories of funding, mitigation, adaptation and prosperity, despite challenges. Stories like those from an initiative in Kenya that is helping farmers finely tune their cropping decisions to seasonal weather variations. These are positive stories; stories of change for the better. But again, journalists need to be made aware of these. It is not only the scientists that need to communicate with the media, but also those working on the ground. This will contribute to a greater well-rounded awareness, which can help change society’s attitude and increase action at a political level.

The training was invaluable for those that attended, having contextualised climate change for the region. For many, it was an eye-opener, for others it was a networking session that facilitated interactive dialogue with other journalists, government representatives and scientists, but for everyone, it was an opportunity to find new ways to tell the story of climate change.

IPCC vice chair Jean-Pascal van Ypersele summed it neatly: “The choices we make will create different outcomes”. As the media fulfills the role of political watchdog, so too should it make the choice to play the role of climate watchdog. It is more than just a choice to help educate the world on what business as usual will result in; it’s an ethical obligation.

“If there are those that are doubtful, please get real; wake up” Edna Molewa, South African Minister of Environmental Affairs.