The IPCC rings the warning bell louder. Is anyone listening?

The IPCC rings the warning bell louder. Is anyone listening?

Saleemul Huq, a Senior Strategic Advisor to CDKN, Senior Fellow at the International Institute for Environment and Development, and Director of the International Centre for Climate Change and Development based in Bangladesh, responds to the release of the IPCC's Working Group II report, 'Climate Change 2014: Impacts, Vulnerability and Adaptation'.

I have just spent a gruelling week in Yokohama, Japan at the plenary meeting of the Intergovernmental Panel on Climate Change (IPCC). There the summary for policymakers on climate impacts, adaptation and vulnerability was adopted a day after the official closing, after an all-night marathon of work.

The co-chairs of the working group crafting the summary, Chris Field of the United States and Vicente Barros of Argentina, were on the podium for nearly 40 hours straight. The rest of us lead authors were also supposed to be there on standby in case any of the government delegates had questions on the text.

One reason it takes so long is that each sentence in the summary must be approved, line-by-line.

Having participated as a lead author in three such mega-assessment reports, I can see some positive and negative from the most recent process.

First, on the positive side, is that this is by far the biggest global scientific enterprise the world has ever seen. It involves literally thousands of scientists from all over the world and from a variety of disciplines.

The willingness of scientists from different backgrounds to provide their time voluntarily and to achieve a consensus among themselves (no mean feat in itself) makes it a stimulating collaboration for the thousands of scientists involved.

Another positive is the fact that when the final summary is adopted by governments it becomes their report and no government can then disagree with the findings afterwards. This gives the report enormous credibility in informing policy.

A final positive is that, despite setbacks and lack of adequate movement in policymaking under the United Nations Framework Convention on Climate Change (UNFCCC), each IPCC report has provided significant momentum to the UNFCCC negotiations. Thus it has largely met its aim of science informing policy. 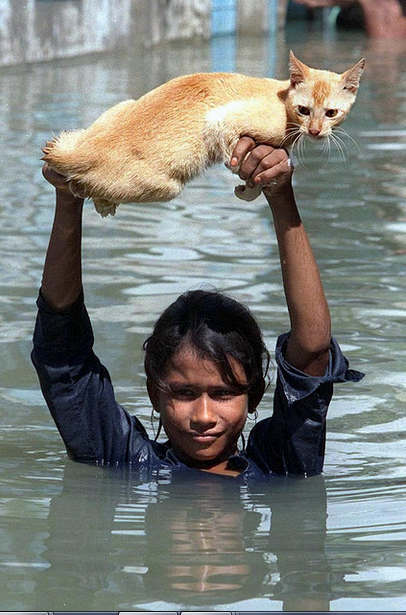 A girl carries her pet cat across a flooded road in the Dhaka suburb of Keraniganj, Sept 12, 2004. These floods in Bangladesh left at least 800 people dead and 300 million homeless.[/caption]

On the negative side, however, the mega-assessments are taking longer and longer to produce (this fifth assessment took over five years) and hence by the time it is published it is already out-of-date by well over a year.

Another negative aspect (from the perspective of adaptation knowledge which is the topic that I work on) is that most of the knowledge is in the process of being generated by planners and practitioners at national and local level. Much of this knowledge does not get published in scientific peer-reviewed journals, or at least it won’t be for a number of years.

But those same planners and practitioners are demanding knowledge of what works, now, and would prefer to have less-than-perfect knowledge sooner rather than wait years for fully scientifically evaluated knowledge.

When it comes to adaptation, I think the IPCC should consider commissioning more special reports on specific topics that can be delivered more easily and within two years instead of over five years for the mega-assessments.

What’s new in this latest report?

First is the overwhelming new evidence from across the globe – including land and ocean ecosystems – of shifts and changes occurring in response to climatic changes. This reinforces the fact that mankind is now irrevocably living in a climate-changed world, one some people have dubbed the “anthropocene.”

Second, adverse impacts of climate change are now hitting all continents and all countries and groups, including rich countries and rich people.

Third, while the world as a whole can probably adapt to an up to 2 degree Celsius temperature rise (which will still mean sacrificing some species, places and people), if temperatures continue to rise to 4 degrees Celsius (which is where they are headed at the present rate), then all bets are off. In other words, our ability to predict ends.

To end on a more optimistic note (and avoid being called an "alarmist"),  I would say we are learning a lot about how to adapt to climate impacts, and paradoxically the poorer countries are leading the way on generating new knowledge through practice on adaptation.

We know what to do. Doing it just needs renewed political will.

So as the IPCC continues to ring the warning bells once again, I hope policymakers will not remain deaf to the warnings forever.

This article was originally published by Thomson Reuters. The views expressed here are those of the author, and not necessarily those of CDKN.