IISD’s Laura Merrill and Philip Gass, and CDKN’s Helen Picot explore the recent wave of fossil fuel subsidy reform and the potential these initiatives have for boosting climate compatible development.

The recent announcement from UAE that it will reform domestic fossil fuel subsidies is the latest in a growing number of countries taking the opportunity to reform subsidies within the energy sector. Fossil fuel subsidies include the financial support governments give to the fossil fuel industry and consumers, for example by preferential tax breaks to the fossil fuel industry or keeping energy prices artificially low for consumers. Fossil fuel subsidy reform (FFSR) not only eases the pressure on public budgets, but also provides an opportunity to build better and better-targeted social welfare systems, along with key climate benefits including reduced GHG emissions.

In 2013-14 around 30 countries undertook initiatives to reform subsidies (see map below). This was due to a number of factors including a transition from the ‘push’ from high oil prices in 2013 putting pressure on tight government budgets, to a  ‘pull’ in 2014/15 with falling oil prices reducing the pass-through costs of subsidy removal to consumers.  Several countries have also realised the potential greenhouse gas (GHG) benefits of subsidy reform as a positive contribution to the Intended Nationally Determined Contributions (INDCs) they are developing as part of the Durban Platform for Enhanced Action (ADP) under the United Nations Convention on Climate Change.

Developing countries are leading the way on subsidy reform, for example India, Indonesia and Egypt all undertook reforms in 2015. Whilst many countries must invest in social measures to offset the costs to citizens of rising oil prices during the process of reform (as in Indonesia, the Philippines and Iran), others have chosen to utilise the fiscal space that reform creates, with investment back into the energy sector and towards renewables (such as Morocco and Ethiopia). 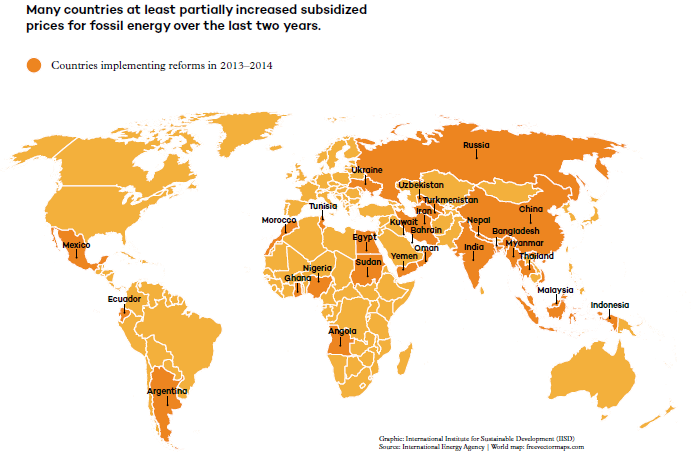 As mentioned, FFSR is one policy tool among many that governments have at their disposal, and it is making a small but important appearance within INDCs, which countries are putting on the table ahead of Paris. For example, Morocco and Ethiopia mention the issue explicitly, while China refers to the need to ‘advance the reform in the pricing and taxation regime for energy-and resource based products.’ As Morocco puts it, where the country has started and continues to reform subsidies to fossil fuels as well as pursuing ambitious renewable energy targets, this is as much about policy coherence and creating fiscal environment to promote low carbon development, as meeting national climate change goals and energy security concerns.  However, as research has found, for emissions reductions, fossil fuel subsidy reform alone is only one of a number of tools required as part of the long-term solution. Rather, subsidy removal must also be part and parcel of a sustainable energy policy that includes effective regulation, and investment in renewables, energy efficiency and public transport infrastructure in order to keep national emissions down for the long term.

While long term risks to development of climate change are clear, there are sustainable development impacts in the shorter term, directly arising from fiscal policy designed to reduce emissions. Recent research commissioned by CDKN, by HR Wallingford and Metroeconomica, shows that fiscal and economic policy, including fossil fuel subsidies, can adversely impact the likely ability of countries to achieve the Sustainable Development Goals (SDGs) by 2030, particularly goals on poverty and energy access, on a timescale before the bulk of physical climate impacts will be felt.

In the run up to COP21 in December, many will hope that further commitments on fossil fuel subsidy reform are put on the table. The draft negotiating text released by the UNFCCC at the end of July contained reference to FFSR, so we might hope that this will stay in the final text. After Paris, countries will need to consider how to implement their INDCs. Removal of perverse subsidies would also allow developing countries a better opportunity to implement their INDC plans in an economically efficient way, setting carbon price signals and avoiding fossil fuel lock-in in urban planning and industry infrastructure.

While the momentum around the elimination of fossil fuels is growing stronger, it is the actions of policy-makers that are most important as they hold the levers to implement change. Consumer subsidies from governments to keep the price of fossils down are still significant. Upstream producer subsidies, benefitting extraction are also notable, with governments under increasing pressure to provide more support to companies experiencing lower profits from fossil fuels, with prices under $60/barrel. So although there is momentum for transition to a cleaner, greener energy systems now, there is still need for countries to continue to push hard to prevent the rising tide of momentum from receding again. Longer term certainty from the climate negotiations process would help governments to stand by their reforms, and take larger steps to growing their economies in a low carbon way. Efforts like INDCS, the work of the Friends of Fossil Fuel Subsidy Reform, and continued public supporter from organisations like IISD and CDKN help to ensure that the impact of FFSR will be a lasting one.

Helen Picot is project manager in CDKN’s Advocacy Fund. She focuses on international climate negotiations and the Sustainable Development Goals, including coordinating CDKN’s work on INDCs.

Metroeconomica, HR Wallingford and CDKN, 2015, REPORT: The impact of climate change policy on the achievement of the post-2015 sustainable development goals