The next step after the Paris Climate Agreement is to turn countries’ national climate commitments into investment deals, says CDKN’s Ari Huhtala. Here, he reports on the latest meeting of the San Giorgio Group: a group of eminent climate finance specialists.

This week, a diverse group of climate finance and development specialists met to take stock of the Paris Climate Agreement and challenges for moving from diplomacy to implementation. Meeting in Venice, Italy, and convened by the five-year-old San Giorgio Group, participants sought to assess whether ‘green’ investment is effective and how green finance can ramp up following the ambitious Paris Summit.

There was a clear agreement that the Paris Climate Conference in December 2015 had changed the political landscape, but that the world needed to see implementation and resource mobilisation quickly in order to deliver on the commitments made. In the last five years, CPI and the San Giorgio Group have been instrumental in working on databases and studies on the landscape of climate finance (for example, their study on the status of climate finance in 2014). All over the world thousands of projects demonstrating best practices and innovative approaches have mushroomed. What is needed now is radical scaling up: developing countries need to go from plans to action.

CPI’s landscape study from 2014 reveals that 72% of climate investments took place in the country in which the funds originated. This highlights the importance of national approaches and leadership, conducive enabling environments for climate compatible investments, and a major role for domestic sources of public and private finance, often leveraged by blending with concessional international funds.

In preparing for the Paris conference, all countries submitted their Indicative Nationally Determined Contributions (INDCs). These are now becoming the basis for planning and action in developing countries.

To be effective and able to mobilise the necessary resources, these Nationally Determined Contributions (NDCs) need to be aligned with national development plans and strategies, and refined into credible investment plans. As the current ambition of the (collective) INDCs is not sufficient to take the world to a less than 2 degrees pathway, all countries should raise the bar to make it possible. Such a world would still be insurable, but a 4 degree world would not. 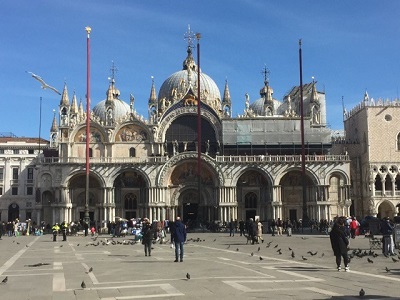 What is happening now is that financiers and entrepreneurs are beginning to integrate the inevitable. The Paris COP gave signals that are being felt (see a related blog by ODI here), and some speakers referred to a quiet revolution. Some major pension funds have started divesting from fossil fuels. Demand for climate-smart financial services in increasing. New instruments have helped accelerate the implementation of low-emission and climate-resilient projects.

However, the capital market and institutional investors are a different reality. Can we expect them to shift to climate-smart pathways through examples and exchanges such as those by the San Giorgio Group, or is it a natural process that needs to take its course?

To reach the 2.0 degrees target, the world needs significantly greater climate finance volumes that at present. To achieve this, both public and private financiers need to make bold choices. Several Multilateral Development Banks (MDBs) have made declarations about achieving targets of 20-30% of their portfolios for climate investments by 2020, but is this sufficient or the right way to approach the challenge? It sends a strong signal of increasing commitment to addressing the climate challenge, but to achieve the necessary transformational impact those institutions should aim at investment portfolios that have fully mainstreamed the climate challenge as soon as feasible. An interesting initiative to encourage development finance institutions to embark on that process are the Principles of Mainstreaming Climate Action within Financial Institutions launched at the Paris COP.

How fast can we change?

I attended a pre-San Giorgio conference seven years ago and was now very pleased to see so much progress in many areas. But seven years on, I also felt that, disturbingly, many of the questions and conclusions sounded too familiar. We have gone a long way in defining the issues and analysing successes and failures, we have developed successful pilots, we have shared experience and created a new climate finance architecture with muscle, but we have not really made a business case for accelerated change. A price for carbon remains elusive, and the rapid decrease in the cost of many renewable energy solutions has not led to an immediate shift in technology choices as inertia is maintained by other factors such as legislation, regulations, short-termism in financing decisions and behaviour of investors and consumers.

The event participants came from a like-minded community (with very few representing developing countries) that is committed to looking for solutions, and the key challenge for the San Giorgio Group now is to go out, reach the less converted communities in the North and the South, flood them with these excellent examples of what works and what doesn’t, and support the participating public and private sector entities in the immediate tasks at hand: converting the NDCs into investment deals to keep the Paris momentum.

How far has green investment progressed in the past 5-7 years? Do you think that the Paris Agreement created a 'sea change' for financiers and entrepreneurs? Please leave your comment below.