Building leaders in resilience in the Philippines

Building leaders in resilience in the Philippines

Erica Bucog, a 'Partners for Resilience' partner reflects on new pathways for building resilience in the Philippines as part of a CDKN supported series of voices from the field.

One of the initial steps in implementing a project is introducing it to stakeholders. Implementation can beeasily facilitated if local leaders and government officials are active and willing participants. Leaders are often urged to heighten their profile of involvement in DRR if their constituents live in a high-risk area frequented by extreme natural calamities. In these areas, leaders serve as rescuers, first aiders, and resource generators during emergencies. But more than that, PfR aims to transform them to be DRR practitioners too. This is the story of two leaders from different PfR project areas in the Philippines.

The people of Malabon City are used to flooding. Because much of the  city lies below sea level, it is a catch basin of the water systems and trash coming downstream from Quezon City and Bulacan to Manila Bay. This situation is exacerbated by a garbage-filled, heavily silted, dead Tullahan River. In recent years, the effects of climate change have encouraged extreme weather events that aggravated this situation such as the case  of Typhoon Ketsana in September 2009. 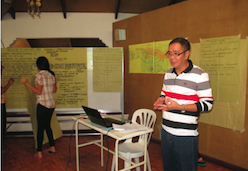 Kagawad Melchor and his community did not expect the water to rise to a height of five meters— typhoons with such extreme rainfall occur only once every 30-40 years—so they were quite surprised at the torrential rain (habagat) in August 2012 because it occurred less than five years after Ketsana.

In the Barangay DRR and Management Committee, Kagawad Melchor heads the Relief and Medical Service Committee. He was involved in  the village’s rescue operations and resource generation efforts like gathering and requesting relief goods and distributing them during both Typhoon Ketsana and the habagat. His personal experience in the rescue operations opened his eyes to the dangers faced by rescuers and made him realize that their village needed to be involved in preparedness and risk reduction.

As part of the PfR program, the local government unit of Barangay Potrero underwent the basic DRR trainings offered by ACCORD. The gap analysis during the training indicated a need for a village- wide early warning system (EWS).

Kagawad Melchor took an interest in establishing his village’s EWS because he sees this as an important factor in reducing the damage, expense and most of all the risks encountered by rescuers when the floodwaters are high. Preparations for the processing and planning of the EWS were speedy because of his initiative. He tapped into his network of friends and former colleagues in relevant government agencies.

During the coordination meetings with various sectors, the relationships of DRR, CCA and EMR to each other became clearer to Kagawad Melchor: “DRR/CCA/EMR is important for our barangay because our area is a low, flood-prone area frequented by disasters. For our EWS to be successful there must also be coordination with the municipalities and cities upstream of the Tullahan River. Rehabilitation and restoration of the river must start in order to lessen the impact of flooding in our area,”

Kagawad Melchor participates not only in the PfR activities in Malabon, but also in DRR activities initiated by the city government or other civil society organizations. Kagawad Melchor ensures the attendance of the village council members and staff in various PfR activities, supports the preparationof the contingency planning workshop, and attends community-level activities. Currently, he is also trying to contact other local government units that cover the area along the Tullahan River to start the talks about the EWS and the rehabilitation of the river.

“The Partners for Resilience program is a big help for our community,especially in terms of preparedness and responding to calamities,” he says. He recognises that he does not have a monopoly of knowledge on disaster preparedness so it is important for him to attend the meetings and trainings offered by PfR. He sees the importance of inputs from CSOs and scientific institutions in strengthening Barangay Potrero’s resilience. 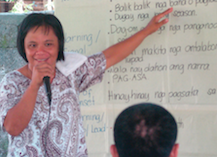 Venie starts her day with household chores, preparing breakfast for the family and getting the kids ready for school. Afterwards, she tends her small farm where she grows corn, banana and coconut for sale, as well as various vegetables for consumption. Outside her home, Venie has been heading their ‘purok’ (smallest unit of local governance)for two years now. Her constituents recognise her leadership. She mediates conflicts and is in charge of activities implemented in their purok. She is also the designated parent-leader forthe conditional cash transfer program of the government, assisting in the monitoring of the beneficiaries.

Venie is one of the most active community leaders who participate in PfR activities. Her contributions to the discussions during the trainings and workshops are very important. When asked why she keeps on doing this, she says, “I think that the PfR project will be of great help to us, like the trainings and other activities. This is the first time disaster risk reduction has been introduced to us—showing us that we are valued as citizens. The things discussed in the trainings are relevant to our situation.”

After the series of DRR/CCA/EMR trainings under PfR, Barangay San Nicolas (village government) started drafting their own contingency plan. For the first time, the local DRM council (BDRRMC) was reorganised to include community leaders and members outside of the village officials and staff. Through the contingency planning workshops, their committee memberships were formed, and Venie became the Vice Chair for the Relief Committee. In early 2013, her committee led the relief distribution and coordination with different government agencies and organisations that provided assistance. ‘

“PfR guided us on what we should do to prepare for disasters. They also helped us analyze problems and identify priority needs such as potable drinking water, livelihood program, tree planting activities, and so on.”

Venie passes on the knowledge she gains from PfR trainings to others. For her it is very important that people understand how to mitigate the impact of disaster and changing climate as well as how to prepare for them and to care for the environment. She articulates her insights on issues such as logging and mining, and attributes it to environmental degradation. “Because of poverty, people are forced to do these things to make ends meet,” she says.

Addressing disaster risk and its underlying causes, Venie says “If we ruin the environment, we are responsible for restoring it. We should take part in gradually restoring what has been destroyed.” She cites tree planting, proper waste disposal, avoidance of logging and mining, and promotion of organic farming as examples of what people can do. Venie is determined to continue what the community has started with PfR to be able to reduce disaster risks. She looks forward to a better way of living in the coming years.

Although the PfR intervention is the first formal integration of DRR, CCA and EMR, having leaders who are open to the program can ensure that learning and results will be optimised.

CDKN has supported this publication under a three – year partnership with the PfR members. The aim is to inform and shape policies for scaling up climate-smart community resilience building, using evidence-based lessons learnt from PfR experiences in Indonesia and the Philippines.

Photos courtesy of ACCORD