Extreme weather events and tides have highlighted the acute vulnerability of the Republic of the Marshall Islands (RMI), a small nation of low-lying atoll islands scattered wide across the Western Pacific. CDKN received this report from the Office of Minister Tony de Brum of the RMI, who is calling for countries to turn the crisis into an opportunity for climate leadership.

Emergency teams are scrambling to deliver water and food to the drought-stricken northern atolls of the RMI, and the capital Majuro has been struck by heavy waves that breached the city’s sea walls, flooding the airport and other major urban areas. Once again, this has brought the reality of climate change home to the Marshall Islands.

The emergency prompted United States President Barack Obama to activate support from US government agencies, under the Republic’s ‘free association’ status with the United States, which provides defence, humanitarian and other vital support.

RMI’s Tony de Brum, Minister in Assistance to the President, said “from drought to deluge, my people are suffering an escalating climate crisis. Thousands of my people in the north are thirsty and hungry, thousands of us here in the south are now drenched in seawater. As I said to the US emergency team this morning, ‘Welcome to Climate Change’”.

Although it is difficult to attribute any one single event to climate change alone, disasters such as these are likely to become far more frequent in the future – and to threaten the very existence of this atoll nation. Coming in the run-up to the 44th Pacific Islands Forum summit, a major international summit to be hosted by RMI in September, the crisis highlights the need for Pacific countries and their international allies to join forces and build a strong and credible response to climate change.

How the crisis unfolded 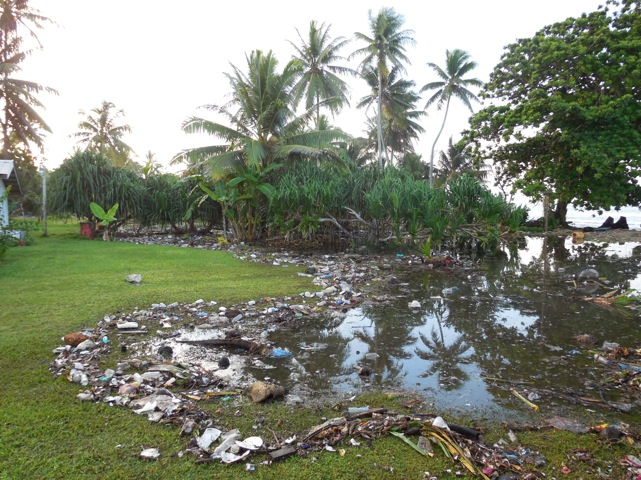 As described recently by RMI’s Foreign Minister Phillip Muller in the Washington Post, the Marshall Islands Government declared a State of Disaster on May 7 and called for emergency international assistance to tackle a climate-induced drought in its northern atolls. The drought left 6,000 people surviving on less than one litre of water per day, exacerbated by failing food crops and the spread of drought-related diseases such as diarrhea, pink eye and influenza.

Many countries and international organisations have generously provided support for the delivery of drinking water, purification units, and foodstuffs.

Following a request from Marshallese President Christopher Loeak to US President Barack Obama, the US declared the drought a disaster on June 14, enabling disaster assistance from US government agencies. A team from the US Federal Emergency Management Agency (FEMA) arrived in Majuro last week to assess the drought, only to witness the king tide and storm waves knock down the seawalls and flood the runway at Majuro’s airport. 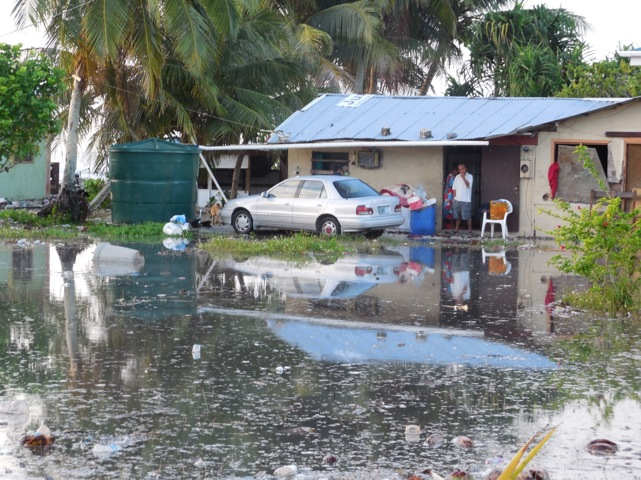 Minister de Brum called for a new surge of political commitment and international leadership to stave off further climate disasters from battering his country, and other vulnerable countries like it.

“We are very grateful for the help we have received. But aid will not stop floods, droughts and disease from becoming the new norm. As we have said for years, prevention is far better than cure. What we need is a new wave of climate leadership.”

“This September, we will host the 44th Pacific Islands Forum summit, bringing together leaders from the Pacific Island countries, Australia and New Zealand, and our development partners from the world’s biggest emitters, including the US, China, the EU, India, Japan and Canada.

“At the Forum, we will propose a Majuro Declaration for Climate Leadership to galvanise more urgent and concrete action on climate change. President Obama’s announcement is a welcome, if long-overdue, step in the right direction. But it is only a first step.”

“I urge U.S. Secretary of State John Kerry and other climate leaders to accept our invitation to come to the Forum in Majuro. Standing just two metres above sea level, there is no more poignant place to say: ‘Enough is enough, we will beat this thing!’ ”

CDKN has been providing assistance to Independent Diplomat to support the RMI’s particular brand of ‘climate diplomacy,’ which integrates climate change considerations into its foreign policy and seeks to amplify the concerns of small island nations at the UNFCCC and in other international fora.

You can read more about CDKN’s support for climate diplomacy and initiatives to promote the voices of poor and most climate vulnerable countries in our recent Outlook news.