CDKN’s Suzanne Carter and FCFA’s Jean-Pierre Roux explore why climate finance proposal developers are being encouraged to focus on climate impacts before determining the best solutions.

In the last year, the Green Climate Fund (GCF) has been asking countries for better justification of why their project proposals offer appropriate responses to potential future climate change impacts. Providing such an “adaptation rationale” for climate finance proposals is now a necessary, but challenging, requirement in data-poor countries.

Currently, many proposals to climate funds are built around pre-existing project ideas seeking new sources of funding. Retrofitting an adaptation rationale onto these types of proposals is generally difficult for two reasons.

For funders such as the GCF and Adaptation Fund, which are only mandated to support climate projects, the proposals must prove ‘additionality’: the project costs must make the investment more resilient to climate change.

There are many examples in project proposals where future climate impacts are not considered at all or not in a sufficiently robust way, risking mal-adaptation.  A common example is a proposal for small-scale hydro-powered irrigation pumps. Better irrigation is key to improving agricultural yields, but if a particular river basin is likely to experience more droughts this could be a bad investment as river flows may not be strong enough to sustain inappropriately-sited pumps in the future. If the likely future climate impacts on the river basin had been considered, different solutions may have been chosen to respond to a trend of more frequent droughts.

Proving that climate change will have a different and additional impact to existing climate variability at the project level is extremely difficult.  “Proving ‘additionality’ misses the larger point that many projects ought to be conceived in the context of climate change” says Dr Charles Reeves, from the Climate Resilient Infrastructure Development Facility (CRIDF).

Rather than “adding on” climate change in a narrowly conceived project, climate change may require for a fundamentally new project to be conceptualised. For instance, a robust climate change assessment may require water infrastructure developers to consider resilience at the river basin scale, rather than pursuing preconceived local or national-scale hydro or irrigation projects, which are currently the norm.

In November 2018, a workshop on the adaptation rationale was hosted by the GCF. The framework that the GCF provides (see image, below) encourages countries to start with the climate science available and then draw out the impacts they expect to face, as well as the vulnerability of affected communities.

This allows countries to prioritise the impacts that have the highest risk.  With this climate risk established, the project developer should then explore a range of possible solutions. Funding proposals that demonstrate a range of possible solutions to the identified impact, by providing cost benefit analysis of each solution, have a higher likelihood of being funded for the solution with the best long-term outcome. 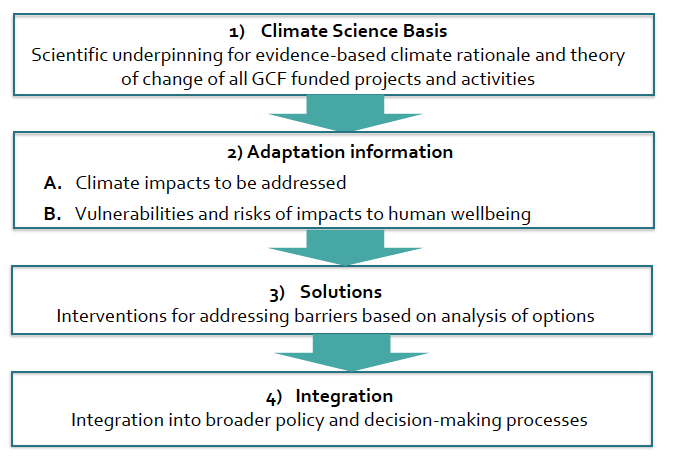 Unfortunately in many Least Developed Countries (LDCs), an understanding of the climate risks faced is not always straightforward.  First, future climate projections are inherently uncertain, especially with regard to rainfall and related impacts. Second, identifying climate impacts are complex and require expertise in several related disciplines and extensive bespoke analysis.

In these cases, investing in climate services to build the evidence base for improved climate projections is being advocated as a good starting point. The World Meteorological Organization (WMO) signed an MOU with the GCF in December 2018 to support countries that wish to invest in national climate services and in the long run develop improved evidence of potential climate change impacts. This benefits projects working on climate information services and better data generation which can provide the basis for sector specific interventions in the future.

In lieu of robust and decision-relevant climate data, there have been innovative collaborations between scientists and local stakeholders to co-produce climate impact narratives, which combine available climate and impact data with local knowledge and development priorities. These narratives, if developed properly, can offer both scientifically defensible as well as decision-relevant and legitimate recommendations to inform climate change adaptation projects. In Lusaka, for instance, the FRACTAL research programme produced climate risk narratives for the Lusaka city-region, that have subsequently been employed in the climate rationale for a Green Climate Fund application, demonstrating the potential value of climate impact narratives for supporting adaptation finance.

Building a climate rationale is both necessary to access climate finance and technically challenging. If well done, it gives peace of mind all round that a robust solution is being proposed and that limited funding will be put to the best possible use to build a more climate resilient society.