Much of the current climate change debate focuses on mitigation and adaptation. These are important pillars of international climate policy, and provide the framework for ongoing global climate talks. But does this approach make sense when policy makers come to grapple with the impact of climate change on people’s lives and livelihoods in their countries? And is it right that the international financial flows for climate assistance should be channeled along these lines?

Climate change is already imposing major physical impacts on developing countries. Sea level rise and salt water intrusion, increased extremes of drought and flooding, and more severe storms, with their consequences for lives and livelihoods, are all taking a toll. (See our arresting short film ‘Voices from the front line of climate change’ for testimonies from affected communities). What’s more, as the world imposes constraints on greenhouse gas emissions, economies will change, and developing countries will have to change to remain competitive.

Coping with these effects now is hard enough. Planning to deal with the ‘known unknown’ – the sheer uncertainty of future climate patterns in a world that may warm by two or three or four degrees, and coping in a fast changing world economy – is a steep challenge for policy-makers.

So it is not just a question of managing the physical impacts of climate change. The social, economic and political responses to climate change by governments, private companies, producers, consumers and voters will also shape the development landscape and sense of economic possibility for the future.

We can expect a landscape characterised by changing patterns of innovation, production and trade tied to climate responses. The scale and pace of these changes will be unprecedented.

Why development must be at the heart of adaptation and mitigation policy: a ‘triple win’

The smartest climate policy choices should add a wider development dimension to adaptation and mitigation goals. Of course, it makes no sense to build a society’s defences against climate change in carbon-intensive ways. Similarly, attempts to lower greenhouse gas emissions and pursue low carbon development paths should be planned through a lens of climate resilience.

Climate policies that are both low carbon and that create more resilience against future climate change are, then, an imperative. For example, decision makers would have to think hard about building a nuclear power station on a coastline that’s likely to be affected by sea level rise and violent storm surges, no matter how ‘clean’ the technology in climate terms. 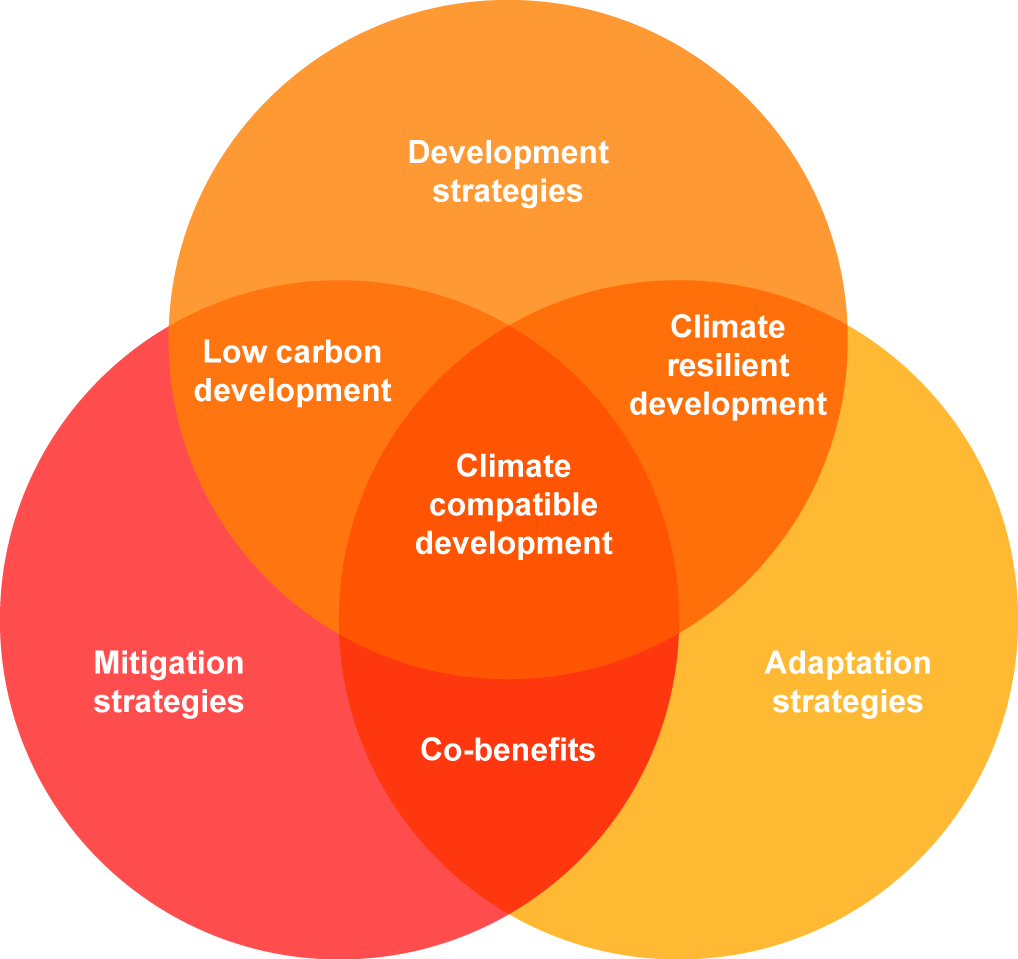 CDKN takes this analysis a step further. We argue that adaptation and mitigation policies can and must advance human development. Consider, for example, some land use policies in the name of climate mitigation, such as planting monocultures for carbon storage or for certain types of biofuel production. These run the risk of decreasing human resilience to climate change and can undermine socioeconomic development by routing farmers into less biodiverse cropping systems, which in turn may increase the vulnerability of crops to disease and put farmers at the mercy of price fluctuations.

It is possible to identify climate strategies that embrace development goals and development strategies that integrate the threats and opportunities of a changing climate. Where adaptation, mitigation and development come together in a ‘triple win’, we call it climate compatible development. Many countries are moving along this path. CDKN is working in a range of countries, including Rwanda, Ghana, Kenya, Colombia, Ecuador, and Pakistan, to combine these strategies into a coherent approach.

We have learned that the process of identifying the climate compatible roadmap requires careful work with a range of stakeholders. It first requires an understanding of the impact of a changing climate over time, and then combining that understanding with the development of a low emissions economic pathway stretching some decades from today. What follows is the development of the drivers and measurement systems that keep us on that pathway. This entire process requires political will, capacity and patience.

How CDKN can help

CDKN’s research programme provides grants to address knowledge gaps on climate compatible development. All of CDKN’s work is undertaken with a partnership ethos, to strengthen and build on existing initiatives, and avoid duplication.

This article was based on the CDKN policy brief  'Defining climate compatible development' by Simon Maxwell and Tom Mitchell (Nov 2010). The author wishes to thank Simon Maxwell, CDKN Executive Chair, and Stefan Raubenheimer, CDKN Africa Director, for their contributions to the article.