In part three of CDKN’s exclusive new discussion series on green growth, our Executive Chair Simon Maxwell seeks your views on what green growth means for developing countries. Simon has put together ten propositions on green growth, and will be answering your questions and comments on two of these propositions each week. Visit Ten observations on climate change and growth to read the paper in full, and read last week’s discussion here.

In part two of this discussion series, we looked at the need to adopt a global perspective when considering the impact of climate change on growth, and when adopting climate compatible strategies.

This week, Simon looks into the feasibility of low carbon growth in the developing world, and considers the need for a flexible and competitive economy.

From the previous discussion, low-carbon – or green – growth is not the only aspect of a new growth policy, which needs to deal with a range of climate-induced shifts to input-output relationships, relative prices and market opportunities. Nevertheless, though not sufficient, low carbon growth is a necessary aspect, as illustrated by the Vietnam example cited earlier.

Pessimists argue that the lower energy efficiency of non-fossil fuels will inevitably slow growth. Indeed, more generally, estimates from the Stern report that tackling climate change will cost 1% of GDP also imply that growth will need to be sacrificed. Stern has increased his estimate to 2%. With specific reference to energy, the argument is that increases in energy efficiency or ‘energy productivity’ will be insufficient to offset higher costs, and that this will constrain growth.

A practical insight is provided by recent analysis of the impact of rising oil prices. Dirk Willem te Velde examines the impact of a one third increase in oil prices over two years. This is a larger increase, and more sudden, than could be expected as a result of carbon pricing. Nevertheless, it would cut 1% from global GDP and cost sub-Saharan Africa $US 8bn, with the bulk of the costs, and the biggest proportional GDP losses, suffered by some of the poorest countries: Ghana, Swaziland, Lesotho and Togo all lose more than 3% of GDP, as do Honduras and Nicaragua. Poor households suffer most. Of course, oil exporters gain from a general increase in the oil price.

In contrast, green growth optimists argue that low carbon options will boost growth in both the short- and long-terms, leading to immediate resource savings and job creation in the short term, and to the creation of competitive advantage in the longer term.

Dirk Willem te Velde is among those who argued for a (part) green fiscal stimulus during the global financial crisis, partly to encourage energy efficiency. He reported that:

‘Preliminary research suggests that productive firms tend to be more energy efficient, so private sector development policies that promote productivity growth can also promote greener growth. Support for the adoption of green technology can help to narrow the energy efficiency gap between the actual energy savings and energy savings that are economically and socially efficient.’

More generally, the Green New Deal Group argued in 2008 for a package of measures in the UK, including:

•          ‘Executing a bold new vision for a low-carbon energy system that will include making ‘every building a power station’. Involving tens of millions of properties, their energy efficiency will be maximised, as will the use of renewables to generate electricity.

•          Creating and training a ‘carbon army’ of workers to provide the human resources for a vast environmental reconstruction programme.

•          Ensuring more realistic fossil fuel prices that include the cost to the environment, and are high enough to tackle climate change effectively by creating the economic incentive to drive efficiency and bring alternative fuels to market.

•          Developing a wide-ranging package of other financial innovations and incentives to assemble the tens of billions of pounds that need to be spent.’

Similar lists are found in many prescriptions for climate-friendly growth, including by authors such as Thomas Friedman, George Monbiot, Lester Brown and Tim Jackson. Most recently, UNEP has published its proposals for a green economy, arguing that:

‘Perhaps the most widespread myth is that there is an inescapable trade-off between environmental sustainability and economic progress. There is now substantial evidence that the “greening” of economies neither inhibits wealth creation nor employment opportunities, and that there are many green sectors which show significant opportunities for investment and related growth in wealth and jobs.’

The ‘green sectors’ referred to as offering potential for job growth include agriculture, buildings, forestry, transport, renewable energy, and waste management. For example, Figure 2 illustrates the total employment potential in the energy sector under a 2% green investment scenario, illustrating the shift from coal to alternative sectors.

Total employment in the energy sector and its disaggregation into fuel and power, and energy efficiency under a 2% green investment scenario.

The UNEP modelling does not make allowance for the growth of nuclear power, but it is worth noting that many countries are likely to consider this option, despite temporary hesitations caused by the post-tsunami difficulties at the Fukushima facility in Japan.

A final example comes from work on scaling up low carbon infrastructure investments in developing countries, carried out by the World Economic Forum. In one stream of work, the objective was to investigate how South Africa might finance renewable generating capacity of 20GW by 2020. The case was made not on environmental grounds alone, but equally in terms of employment creation, export potential and energy security. For example, up to 50,000 jobs could be created if renewables accounted for 15% of total energy production. Greening the economy was presented as an industrial policy just as much as a climate policy.

Nick Stern is unambiguous in his conclusion: ‘low carbon growth can be a reality if we so wish’.

6 .Get overall policy right: the need for a flexible and competitive economy

The first approach to policy for low carbon growth is that an economy must be equipped for growth in a rapidly changing global economy. This is always true, and growth policies need to recognise that technologies and institutions can change economic prospects very quickly. Climate change and climate change policy simply add further elements.

What ‘equipped for growth’ means is an open question. The Commission on Growth and Development has concluded that there are no recipes for growth, only ingredients, summarising these in a diagram reproduced as Figure 3. Macro-economic stability, openness, market allocation, leadership, and ‘future orientation’ are all key factors. The Commission for Africa took a similarly eclectic view. 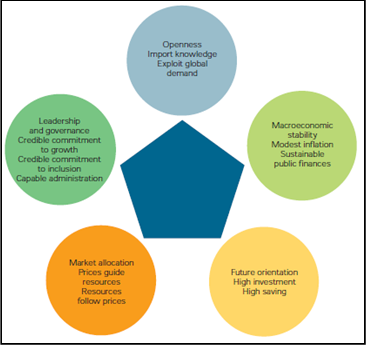 In practical terms, one way to judge whether countries have the characteristics required for high and sustained growth is to make use of the World Economic Forum Competitiveness Index. This offers a way of scoring and ranking countries at different levels of development, analysing 12 pillars of competitiveness, weighted differently for different kinds of economy, as in Figure 4. The pillars are broadly consistent with the Growth Commission. The scoring and ranking leads to a wide spread of performance. In 2011, Switzerland and Sweden ranked at the top, Chad and Angola at the bottom.

The 12 pillars of competitiveness 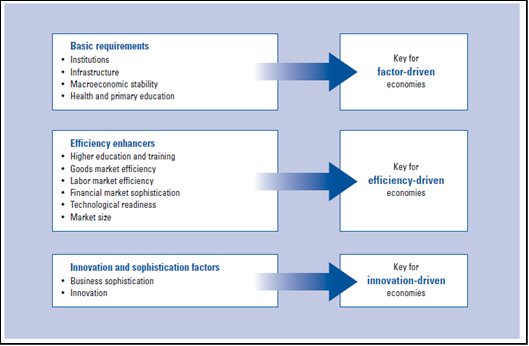 Inevitably, poor countries score poorly on the Competitiveness Index compared to rich countries. However, some score better or worse than others at comparable levels of development. Figure 5 shows the CI score for a range of DFID’s priority countries, showing that most score poorly. More interestingly, Figure 6 shows CI performance relative to the countries’ Human Development Index. India, Rwanda, South Africa and some others score relatively well for their level of HDI, whereas Pakistan, Nigeria and Ghana, among others, score relatively poorly. This may indicate where the priorities are for donor engagement. 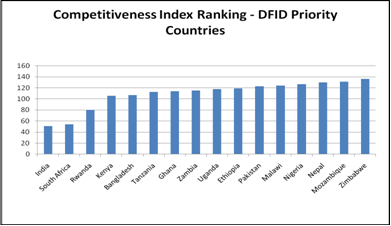 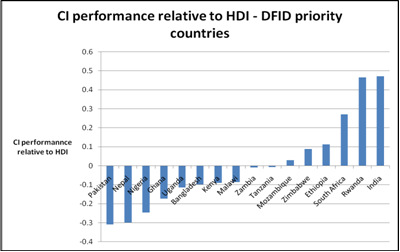 ODI and KPMG are developing an alternative way of analysing readiness for change, using a Capability Index. This is work in progress, but the model is summarised in Figure 7. A clear distinction is made between economic, social and institutional capabilities

The dimensions of capability 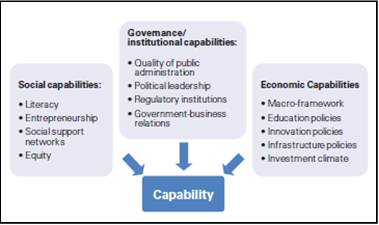 Whatever measure is used, it is clear that growth can be accelerated with the right mix of policies and public expenditure programmes. If climate change challenges current growth models, it is all the more important to invest in readiness. But there is more: climate policies themselves also shape growth.