Three times as many sites of sacred value, scientific wonder and natural splendour across Africa could face risks from human-caused climate change by the middle of the century, a study in Nature Climate Change reveals. This article was first published by Carbon Brief.

Places at risk range from Sabratha, a second-century trading-post in Libya, to Kunta Kinteh Island, a Gambian site that serves as an “important, although painful” reminder of the slave trade.

The study suggests there is an “urgent need” for more investment in methods to protect African heritage sites from the impacts of climate change, a study author tells Carbon Brief.

The “crucial” research sheds light on how climate change is driving “tangible and intangible” loss and damage around the coast of Africa, a researcher from Ghana says.

“A lost cultural and natural heritage could mean erasing our story,” adds a young climate activist from Nigeria.

The research, published in Nature Climate Change, is the first to examine how coastal African heritage sites could be threatened by sea level rise. It considers 284 heritage sites in 38 countries.

The study includes heritage sites that are recognised or under consideration by the UNESCO World Heritage Centre and the Ramsar Convention on Wetlands of International Importance.

The list includes important bird migration routes, waterways that are key to coastal fishing communities and archaeological sites containing vital clues on the evolution of humans. 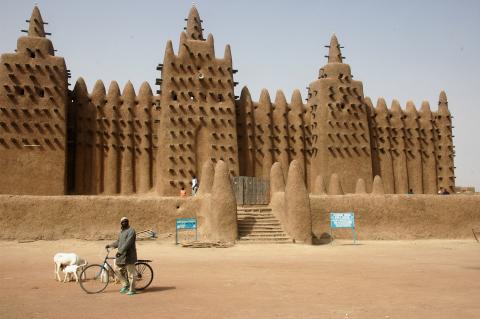 Despite being the most comprehensive list of its kind, it does not capture all sites of cultural importance in coastal Africa, says study author Prof Joanne Clarke, a climate and heritage researcher from the University of East Anglia. She tells Carbon Brief:

“We modelled climate risks for sites that are supported by the World Heritage Centre or the Ramsar Convention, but there are hundreds of sites that are not supported. Many [unrecognised sites] are incredibly fragile and important to local communities. Really pressing are indigenous sites, which may not have global recognition but are highly valued to local people.”

The research specifically examines how African heritage sites could be affected by extreme events associated with sea level rise, including coastal flooding and erosion.

Across the globe, sea level rise is being driven by the melting of land ice and the expansion of water as it heats up. Sea levels around Africa rose at a faster rate than the global average over the past three decades, according to the Intergovernmental Panel on Climate Change (IPCC).

Sea level rise can increase coastal flood risk by raising water levels, which means that, during high tides or a storm, coastal defences are more likely to become overwhelmed.

Higher sea levels can also increase the average height of a “storm surge” – a rising of the sea above the normal tide level during a storm, which can cause coastal flooding.

For the study, the scientists combined maps of flooding projections with those showing possible shoreline change across Africa.

The first is a “medium” emissions scenario, where global greenhouse gases continue to rise for the next few decades before levelling off in the second half of the century (“RCP4.5”).

The second is a “high” emissions scenario, where global greenhouse gas emissions continue to rise until the end of the century (“RCP8.5”).

For each heritage site, the researchers estimate the extent of area exposed to “100-year” coastal flooding and erosion events at present, as well as in 2050 and 2100. (“100-year” is a term used to describe an event that is so severe that at present it only has a 1% chance of occurring in a given year.) 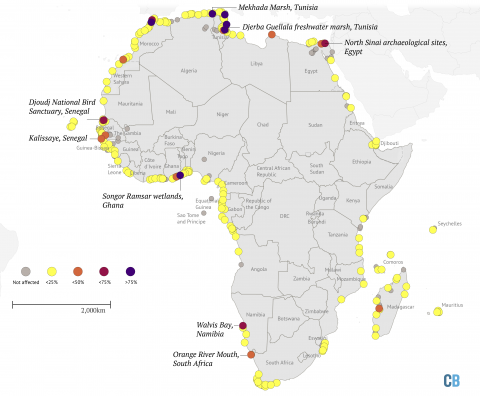 Percentage of area at risk from sea level rise under a baseline, medium and high emissions scenario during 2050. Data source: Vousdoukas et al. (2022). Map by Tom Prater for Carbon Brief.

The research finds that the number of cultural and natural heritage sites at risk from coastal flooding and erosion is expected to triple by 2050, from 56 to 191 under a medium emissions scenario and 198 under a high emissions scenario.

In the second half of the century, the number of sites exposed to coastal flooding and erosion is expected to reach a maximum and stabilise, the research finds. However, the extent of area exposed in each site is projected to continue increasing.

The research finds that several African countries will see all of their cultural and natural heritage sites put at risk by 2100 in either scenario. These countries include Cameroon, the Republic of Congo, Djibouti, Western Sahara, Libya, Mozambique, Mauritania and Namibia.

One cultural site at risk in Cameroon is the Lobé Waterfalls, a globally unique set of waterfalls up to 20 metres high that flow directly into the Atlantic Ocean.

The waterfalls “represent a strong basis of the symbolic beliefs of the Batanga, Maabi and Pygmee peoples that live in the environs and associate the falls with various cultural rites”, according to UNESCO.

“Loss and damage” is a term used to describe the inevitable consequences of climate change, such as the loss of human lives during extreme weather events.

(The concept of loss and damage featured prominently at the COP26 climate summit in Glasgow in 2021, where developing nations called on rich economies to take more responsibility.)

“Investment in heritage adaptation to climate change is urgent. Hybrid protections that include ecological infrastructure, such as rock sills combined with saltmarshes, seagrasses or restored mangroves, may prove effective protections for exposed sites. But engineered solutions will only address one dimension of the risk. Improving local and Indigenous governance can further provide enabling conditions for site protection.” 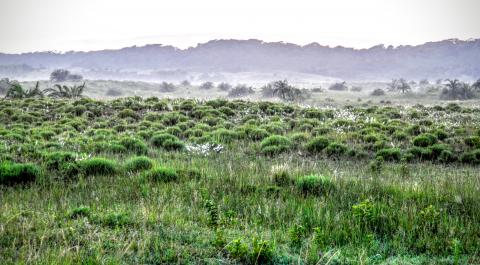 The findings have “implications for populations living along the coast of Africa”, says Dr Frederick Dapilah, a climate researcher from the Simon Diedong University of Business and Integrated Development Studies in Ghana, who was not involved in the study. He tells Carbon Brief:

“Increasing attention is being paid to loss and damage resulting from climate change at both local and global scales. Therefore, [this study] is crucial. It shows that human-driven climate change could lead to the loss of economic or tangible and intangible cultural heritage as well as indigenous local knowledge along the coast of Africa.”

The research suggests that Africa is “bearing the brunt” of climate impacts, adds Oladosu Adenike, a young climate activist from Nigeria. She tells Carbon Brief: