IPCC authors and government give young scientists direction in Kampala

IPCC authors and government give young scientists direction in Kampala

Ritah Namisango of Makarere University reflects on the engagement between IPCC AR5 Authors and the university's young scientists during a special event at the Kampala-based university.

“Given the interdependence between countries in today’s world, the impacts of climate change on resources or commodities in one place will have far-reaching effects on prices, supply chains, trade, investments and political relations in other places. Thus, climate change will progressively threaten economic growth and human security,” highlighted Dr. Youba Sokona while sharing the Intergovernmental Panel on Climate Change (IPCC) Fifth Assessment Report (AR5) with over 50 young scientists at Makerere University.

On Friday 22nd August 2014, Makerere University  in Kampala, Uganda hosted the Young Scientists Seminar where students from Makerere and Kyambogo University held an interactive discussion with Lead Authors of the IPCC AR5, the academia and officials from the Ministry of Water and Environment.

The seminar formed part of a series of dissemination activities- the media training held on 20th August 2014 as a pre-cursor to the event, the IPCC Outreach event/workshop held on 21st and 22nd August 2014 at Hotel Africana, Kampala; and the Young Scientists Seminar held on 22nd August 2014, at Makerere University, Kampala.

On behalf of Makerere University, Dr. Twinomuhangi, who is also a Lecturer in the Department of Geography, Geo-informatics and Climate Sciences, College of Agricultural and Environmental Sciences (CAES) highlighted the significance of the young scientists engaging with IPCC authors on the report.

“The Young Scientists will face the consequences of climate change. We are aware that some of them are involved in research on climate change, and most of them are conducting research whose dissemination or impact will be affected by climate change.  As part of the IPCC Outreach event, we felt it important to interact with the young scientists so that together we can take on the climate change mitigation and adaptation agenda,” he said.

Opening the Young Scientists Seminar, the Acting Vice Chancellor of  Kyambogo University, Professor  Eli Katunguka-Rwakishaya, who joined Makerere University in 1976 and served until 2013, thanked the organizers-the Ministry of Water and Environment (MWE), and CAES for prioritising engagement of the youth in the climate change agenda on mitigation, adaptation and building resilience.

Professor Katunguka-Rwakishaya, a former Director of Research and Graduate Training at Makerere University, and Professor of Veterinary Medicine said:

“Climate Change is a reality. I have seen and experienced the effects of climate change.  I am able to observe the change in weather patterns. Rains are unpredictable, and this means that our agricultural productivity is now unpredictable yet Uganda is an agricultural country whose economy Is dependent on weather.”

Continuing with the key note address, Professor Katunguka-Rwakishaya pointed out that increased interaction of human beings and animals as a result of the impacts of climate change, such as drought and floods has led to emerging diseases which have affected economic activities. He warned that the situation would get worse if Ugandans did not actively participate in the mitigation process.

The IPCC authors then shared with the young scientists the mandate and role of IPCC and the key findings of the IPCC Fifth Assessment report. Some of the key messages included:

The Session Chair, Dr. Fred Tanga Odoi, a renowned historian at Makerere University captivated the audience when he reminisced about his study of Geography, and aligned it to the findings of the IPCC Fifth Assessment Report as well as the current changes in weather and climate in Uganda.

Dr. Tanga Odoi informed the participants that since the adverse effects of climate change were affecting all Ugandans, the key stakeholders including the academia and students both in the Sciences and Humanities disciplines should be involved. 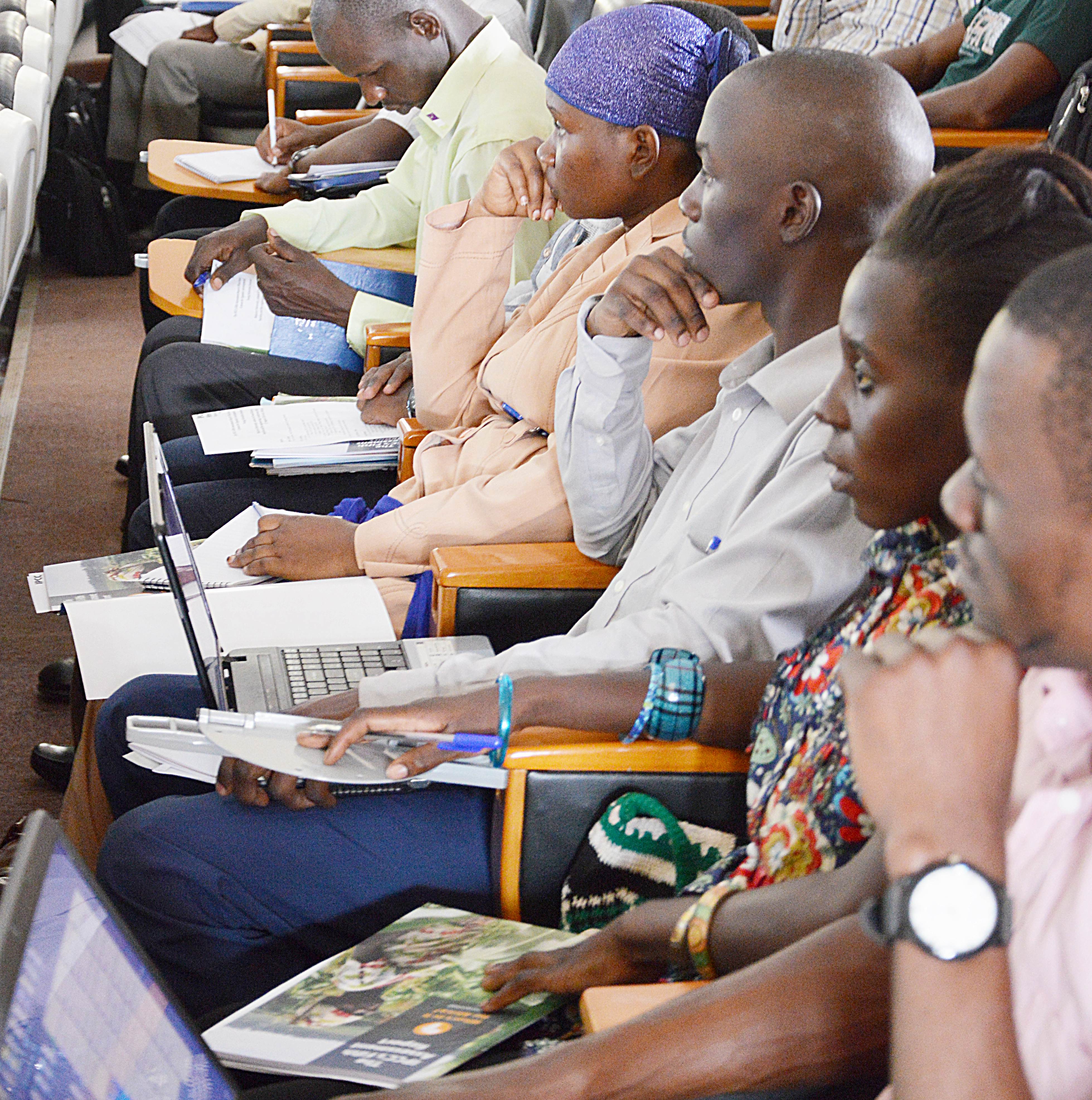 Dr. Tanga Odoi also emphasised the need for the Government and all Ugandans involved in implementation of urbanisation and industrialisation processes, to always ensure that the effects on the environment and climate are fully analysed and appropriate mitigation and adaptation measures considered and included in the contract and implementation.

How can young scientists contribute to the climate science agenda?

During her presentation, Dr. Lynne Carter from Makerere University Centre for Climate Change Research and Innovations (MUCCRI) advised the young scientists/students to contribute to the climate change agenda:

On behalf of MUCCRI, Dr. Carter expressed their readiness to nurture and mentor upcoming students/youths with a passion for undertaking research in climate change.

Representing the Ministry of Water and Environment, the Adaptation Officer in the Climate Change Department, Mr. Muhammad Semambo reiterated the Government of Uganda’s commitment to keeping climate change issues on the priority list of the development agenda.

He appealed to the young scientists and youth to join climate change mitigation and adaptation efforts at all levels with special focus on agricultural research as well as research on the emerging field of oil and gas.

Mr. Semambo also commended Makerere University for training and providing knowledge on climate science and climate change and also informed the audience that the Ministry of Water and Environment was coming up with a Climate Change Research Centre that would further inform the research and policies in the field of Climate Science and Climate Change.

This was followed by 20 minutes interactive question and answer session, which climaxed with the young scientists and youth appealing to the Intergovernmental Panel on Climate Change (IPCC)  and the Ministry of Water and Environment to come up with more dialogues with the youth, and nurturing and mentorship programmes.

The Young Scientists Seminar was held in the School of Food Technology, Nutrition and Bioengineering, Conference Hall, CAES, Makerere University.