Pakistan ready to set a roadmap for reducing carbon emissions

Pakistan ready to set a roadmap for reducing carbon emissions

The government with contributions from with line ministries and experts from Pakistan and abroad including CDKN, officially launched a six-month national consultative dialogue to develop Pakistan’s contributions to limit global temperature rise below 2C.

The INDCs are the commitments that are required from more than 190 countries under the United Nations Framework Convention on Climate Change (UNFCCC) for addressing climate change beyond 2020, and are intended to set the stage for the negotiation of a new legally binding climate deal in Paris, in December 2015.

Each country will put forward it’s ‘Plan of Action” in the context of its national priorities, circumstances and capabilities. This process will help identify each country its contribution toward a low-carbon, climate-resilient future.

To develop realistic scenarios and development projections of Pakistan, the focus between April and June will be on a thorough assessment of Pakistan's ongoing and planned mitigation efforts, adaptation actions, and means of implementation as well as various policies, programmes and projects that Pakistan can showcase as its contribution for a low carbon future.

Officially launching the three-day dialogue, the Minister for Climate Change said that climate change had put Pakistan’s very existence at stake and policy makers need to understand this and plan for the future.

“Climate change has increased the frequency of flash floods and erratic and torrential rain. Sea levels are rising and glaciers are melting at a faster rate,” he warned. 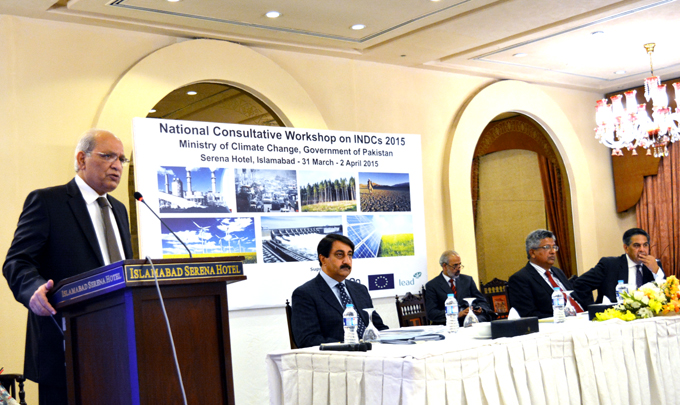 The Ministry of Climate Change (MOCC), he continued, also planned to facilitate sector specific dialogue and stakeholder consultations inside and outside the government and developing an implementation plan and budget to attract both domestic and international financial and technical support.

In August, a set inter-ministerial deliberations are planned for packaging and drafting the final draft of Pakistan's INDC for submission to the UNFCCC in Paris later in the year. The event was covered by large number of media representatives from print and electronic media.

Links to some of the press coverage can be seen below: