This initiative used state-of-the-art science to help Asian and African societies to understand the role of climate change in extreme weather events and prepare for future ones.

The ‘Raising Risk Awareness’ initiative brought together scientists from ‘World Weather Attribution’ (WWA) initiative  – an effort led by Climate Central with the Red Cross Red Crescent Climate Centre, University of Oxford, University of Melbourne and Royal Netherlands Meteorological Institute – with CDKN. It assessed whether climate change has contributed to extreme weather events such as droughts, floods and heatwaves in several countries across East Africa and South Asia.

The team used peer-reviewed methods to discover the links – and distributed the information widely to the press, policy-makers and the public in these countries.

“These regions are particularly vulnerable to weather disasters,“ said Paul Hanle, Climate Central President and CEO. “ We are pleased to join CDKN in this important international alliance that draws upon the cutting edge climate science to manage climate risk.”

“We are looking to kick off new conversations about how developing countries can reduce their vulnerability to climate change and construct more resilient societies after climate-related disasters,” said Sam Bickersteth, CDKN’s Chief Executive.

“Extreme weather events are not selective; they often hit countries that are least well equipped to deal with the impacts – and this can set their development back by years. CDKN is delighted to bring its experience from years of work in climate-resilient development and climate communications to this new partnership.”

Maarten van Aalst, Director of the Red Cross Red Crescent Climate Centre, another WWA member, said: “It makes a real difference to policy-makers and planners if they can find out quickly after a disaster whether such extreme events are becoming more or less frequent. Some decisions about recovery and reconstruction need to be made within days or weeks.

“Take the example of heat waves, killing people and destroying harvests. In some cases, such extreme temperatures, which used to happen every 50 years, now occur every 10 to 15 years, because of climate change. Information like this has deep implications for how developing countries invest their scarce resources.”

Members of the public also have a role to play in assessing the role of climate change in extreme weather events. Friederike Otto of Oxford University, Science Lead for the new initiative, explained: “For our regional climate modelling, we are entirely dependent on the computing time donations from members of the public. Volunteers can sign up to participate in climateprediction.net, which harnesses the power of thousands of personal computers to run our models.”

The ‘Raising Risk Awareness’ project launched in May 2016 and ran until March 2017.

What CDKN's Asian and African leaders are saying about this initiative

Hina Lotia, Director of Programmes, Lead Pakistan/CDKN Asia: “We are unfortunately living through times when human induced climate change is wreaking havoc for the world. Extreme weather events are increasing in frequency, which is causing mass destruction and casualties all over the world. The ‘Raising Risk Awareness’ project, has the potential to greatly reduce the damage that extreme weather events can cause to vast swathes of populations through a multi-pronged approach of amalgamating robust scientific research, dynamic communication techniques and policy engagement.’’

Ali Sheikh, Regional Director, CDKN Asia: “Policy-making is generally at its active best during the phase of disaster management, following an extreme weather event, in the face of overwhelming destruction and casualties. However, if there is adequate and strategic planning done for disaster prevention, the impact of such events can be greatly mitigated. The ‘Raising Risk Awareness’ project aims to overhaul conventional policy-making processes by tapping on scientific knowledge to utilise attribution analyses and predict the occurrence of extreme weather events. By building the resilience of communities who are most vulnerable to the perils of nature, using an effective communication strategy, the disastrous outcomes of climate change can be curtailed.”

Suzanne Carter, Senior Project Manager, CDKN Africa: "Through analysis of current extreme events, the project will also strengthen our understanding of climate risks to extreme events in the future and will ensure that adaptation responses are robust to future changes, avoiding maladaptation."

Kiran Sura, Head of Negotiations Support, CDKN Global: "This project brings together the science, media and policy communities to better understand the risk of extreme weather events in a warming world. It will be critical to understand to what extent changes in the frequency and the severity of such events represents the new normal so that affected communities, policy-makers and governments can be better prepared." 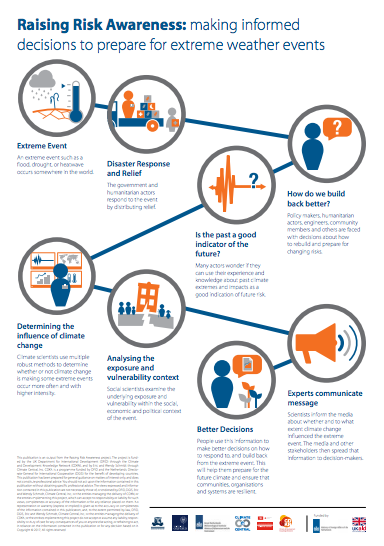 To donate some of your computing time to running the climate models, visit http://www.climateprediction.net/getting-started/

CDKN supports developing countries to plan and pursue climate-compatible development. We do this by combining research, advisory services and knowledge management in support of locally owned and managed policy processes. We work in partnership with decision-makers in the public, private and non-governmental sectors nationally, regionally and globally. As part of ‘Raising Risk Awareness’, CDKN produced informational resources and ran national events to help civil society, communities, practitioners, media and decision-makers better understand and prepare for the risks from extreme weather events.  Contact: Kiran Sura, kiran.sura@uk.pwc.com

The attribution of extreme weather events to human-made climate change is an emerging and rapidly advancing science. There is increasing capacity to estimate the change in magnitude and occurrence of specific types of extreme events in a warming world. Scientists can situate predictions about the increased (or decreased) likelihood of a certain type of extreme weather event in the context of long term climate change trends for a country or region. This creates a narrative for decision-makers and the public about how a certain type of extreme event – such as intense rain, drought or heatwave – will become increasingly frequent. Such systematic and rapid scientific analysis is the focus of the World Weather Attribution (WWA) Initiative. With a robust evidence base and the right protocols in place it is now possible to run near real-time extreme weather event attribution within days of an event striking.

Not all extreme events are becoming more likely. Some are becoming less likely. For others, the risk has not changed. Identifying those events where the risk has changed dramatically is crucial to societies’ efforts to adapt to climate change.

Take a look at the RRA Infographic